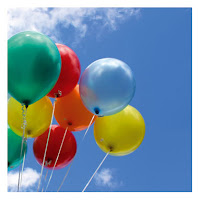 This evening I had the pleasure to meet with a couple whom I am preparing for marriage. They are unusually talkative which makes our meetings very enjoyable.

In talking about their wedding plans, they mentioned that they had considered having the congregation release balloons after the wedding but the florist said they couldn't guarantee the balloons until about a week before the wedding because of - are you ready for this? - a helium shortage.
I burst out laughing, not having heard something so ridiculous in quite a long time. Don't you laugh yet, though.
Out of curiousity, and thinking it potentially blog worthy (as an oddity factor), I googled the topic and to my great suprise learned that we might actually have a sort of shortage of helium, though I cannot really imagine what any truly serious ramifications might be.
Helium, I learned, is used not only for party balloons, but also in launches of the space shuttle, welding, and in MRI machines (which seems to me to be the only one worthy of concern).
Who would've thought we'd have to stockpile helium?
Posted by Rev. Daren J. Zehnle, J.C.L., K.C.H.S. at 8:35 PM