A new look is on the way

For the past many months - years, really - I have been considering getting a new style of glasses, having worn the same basic shape all of my life (since contacts proved rather a failure).
When making decisions such as these I take quite a long time deciding to finally make the change and virtually no time at all deciding what the change will look like.
Two days ago I made my way to the local opthamologist's office to look at new frames.
The decision to do this was basically made back around Christmas time but I never got around to making the visit (obviously enough). While in Rome, though, I saw numerous frames I liked and decided the time has now come.
The folks at the eye doctor's were very helpful and kind.
I told the gentleman (something to this effect) that I was looking for a pair of frames that were contemporary, yet timeless. Classic. Something that I wouldn't look back on thirty years from now and say, "What was I thinking?!" (I try to keep this thought in mind whenever I buy something significant that alters my appearance. I know; I'm a little vain.)
Together we were able to consider five frames which he let me take back to the office. The office staff - and a few others who happened in - narrowed my choice down to two.
I then took these two frames to the restroom and tried them on for the first time (I think this is a clever way to choose frames, and a good one!). I then chose one of the two frames.
My eyes were tested yesterday and the doctor told me that I cannot jump on trampolines (no real concern, here) or go skydiving and bungee jumping (no real concern here, either) because, apparently, my eyes are longer than most peoples and prone to retinal tearing. Doesn't that sound fun?
At any rate, the frames have been ordered and the lenses are being made and I'll have my new frames any day now.
You should know that the style of frames I really wanted to try weren't available (though I'm happy with what I found). I really wanted to try a pair of round glasses, like Harry Potter: 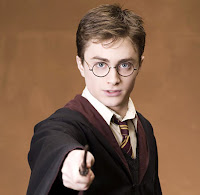 Or like Pope Pius XII (though without the tint): 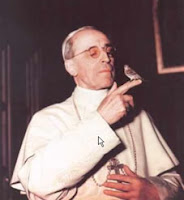