The green Pontiff? An S & S Exclusive (I think)

Much has been made in recent months by the mainstream media that Pope Benedict XVI is a "green," that is, environmentally friendly, Pope.

Typically, when making such assertions they pull a few lines from a text of three pages and forget that the Holy Father said anything other than something about the environment. But there might be a bit of truth to it.
Count this post as the first Servant and Steward Exclusive (Fr. Guy Selvester of Shouts in the Piazza told me I could have this one and one more yet to come).
To preface this exclusive, I must say that when strolling through St. Peter's Square there is something extremely comforting about looking up to the residence of the Vicar of Christ and knowing that he is home. Something about his presence seems peaceful, assuring, safe. I know this from my own experience of being in Rome four times now. I can only imagine what it must have been like to look up at the windows after Pope John Paul II's death and see them darkened in the evening.
While in Rome this past week, I couldn't help but notice a very striking difference in the Apostolic Palace from when Pope John Paul II lived there.
Every evening under the former Pontiff's reign, each of the three windows of the Papal Aparments overlooking St. Peter's Square were lit, generally until 11:00 p.m.
Now, however, under Pope Benedict XVI, only two of the windows are customarily lit: 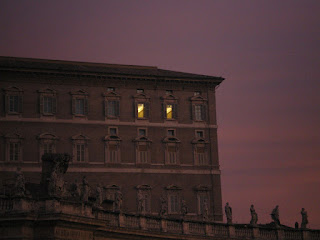 Stopping through the Square each evening - and even in the morning - at varying times, it was a rare sight to see all three windows lit. In fact, I only saw them lit once together, and then only briefly: 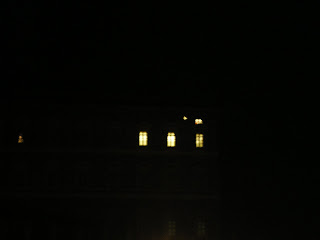 I cannot say with any certainty, but it may be that the current Bishop of Rome does not like to use more electricity than necessary.
Posted by Rev. Daren J. Zehnle, J.C.L., K.C.H.S. at 5:10 PM