The Holy Father presided at Vespers in the Basilica of Saint Paul Outside the Walls on the Feast of the Conversion of Saint Paul to mark the centenary of the Octave of Prayer for Christian Unity. Thanks be to God, I received a ticket to attend the celebration.
I had hoped to arrive at the Basilica about 2:30 p.m., three full hours prior to the start of Vespers, to use this time to take pictures of the Basilica since it is the one most difficult to reach. This particular Basilica is my favorite of the four "major" ones, the others being St. Peter's, St. John on the Lateran hill, and Saint Mary Major. 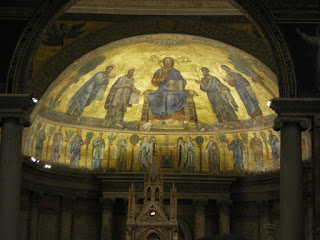 At any rate, I actually arrived at the Basilica about 3:00 p.m., due to some delays caused by shopping, and glad that I arrived later than intended. I hadn't taken into account, you see, the possibility of the Basilica being closed before Pope Benedict XVI's arrival. 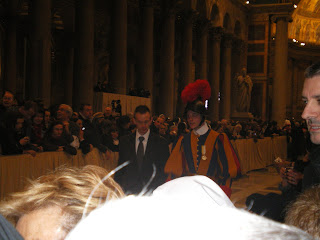 When I reached the front gate of the Basilica about one hundred people were already waiting outside and there we stood until they finally opened the doors at 4:00 p.m. After the mandatory bag check I finally crossed the threshold closer to 4:15 p.m. with no real time or chance to take pictures.
Five years ago when I was in Rome I attended Mass on this same Feast and had a profoud spiritual moment. I have written up an article about it and will link to it later today, having forgotten to do so before I left for Rome.
Since I left the hotel before my priest-friends (because I wanted to take pictures) I looked around for a good place to sit, most of which were already taken. Glancing around I saw Fr. Guy Selvester of Shouts in the Piazza - whom I bumped into quite a few times in Rome (Fr. Selvester introduced me to Fr. Jay Toborowski of Young Fogeys) - sitting right on the aisle. He kindly offered me the seat next to him and I sat on the second seat from the aisle. When the Holy Father processed by he was, perhaps, five feet away.
Despite the pushing and shoving - present at all Papal events - that stole from my lens a couple of terrific shots of the Pontiff, it was an event worth attending. I was able to snap a few pictures worth looking at (this experience told me it might be time to consider investing in a new camera with great zoom capabilities): 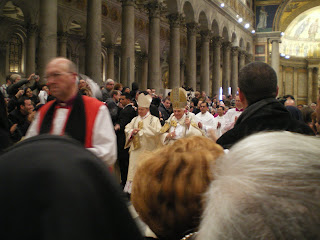 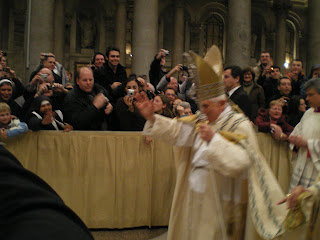 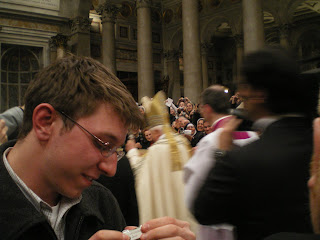 Being right on the aisle, Fr. Selvester was able to take a couple of excellent pictures without the elbow jabs I suffered.
Posted by Rev. Daren J. Zehnle, J.C.L., K.C.H.S. at 6:05 AM