It is no secret that air travel is not what it used to be. It is not even what it was when I first flew across the Atlantic Ocean in 1997. It is also no secret that my air travels rarely go well. Of my last 15 flights, only one has departed on schedule. I recently flew from Philadelphia to Rome, but my checked bag was sent to Paris and took another 48 hours to reach me. On that same flight, a flight attendant dropped a meal tray on me and spilled my Dr Pepper all over me and the woman next to me without offering any apology whatever. These are just a few reasons why my friends know never to fly with me, but simply to meet me wherever we might be going.

We've all likely been there, sitting at the gate waiting for information as to why our flight is delayed, hoping for real, honest answers, only to have our flight continually delayed over the course of four or five hours only to be cancelled (which we knew would happen all along). The airlines - for reasons I do not understand - seem bent on making air travel as frustrating as possible while refusing to acknowledge one simple reality of human nature: We can handle great inconveniences quite well, if accurate and honest information is shared from the beginning and real updates to the situation are given. However, if games are played and information is accurately or honestly shared, we get frustrated, irritated, and even angry.

Yesterday I concluded my visit with the parish priest of Ss. John and Columba Parish in Rosyth and of St. Peter in Chains Parish in Inverkeithing (Scotland) and took the train from Inverkeithing to London with the principle goal of visiting the grave of J.R.R. Tolkien in Oxford. I had planned to return yesterday to Rome to work on the corrections I expected my thesis director would make, but - to my surprise and delight - he had only a few grammatical corrections to suggest and said the paper is good to go so I altered my plans to fulfill a pilgrimage of sorts I've long wanted to make.

All went well making my way on the train from Inverkeithing to Edinburgh and on to Newark, where we made an unscheduled stop for a few minutes. I thought we were simply waiting for a train ahead of us to pain or some such thing until the conductor announced to us we had stopped because of lines down on the track (because, I think, of storm Katie) between Peterborough and London. He apologized for the delay, explained that workmen were on the scene, and said he might as well tell us the bad news at that time: We would like likely be delayed for as much as an hour. He then told us that this would qualify us for a full refund on our tickets if we applied on line.

I was stunned. Never had an airline been so straightforward in communicating the situation. Never had an airline offered even so much as a food voucher without my having to request it first. I heard no grumbling on the train. We were all disappointed, of course, but pleased at the honesty of the conductor.

After a couple of updates without much new information to share, about an hour later, the conductor had more bad news for us: We would likely be delayed for a total of 180 minutes, but they were looking at rerouting us through Cambridge so our delay would not be even greater. He again reminded us that we qualified for a full refund of our ticket price. At this point, lots of passengers from other trains came onto ours, filling it up (it had only been about a quarter full). Still, there was no grumbling whatever because of the honesty the conductor shared us.

Once we arrived in London (three hours later) we were met by agents of the trains service distributing bottles of water, chocolate bars, and cards telling us how and where to apply for our refunds, all with apologizes for the delay which was really quite beyond their control. I couldn't believe it. If I find myself back in the U.K. in the future, I'll certainly consider using this train service again because their customer relations are very good.

I've applied for my refund, which can either be received as a voucher or as a check. The only disappointing part of the process is that there is no option for the refund to be applied directly to my credit card. Still, I'll call later today and ask if this isn't possible.

Now, if only the airlines would do likewise, offering immediate, clear, explanations with apologies, but I won't hold my breath waiting for them to follow suit.
Posted by Rev. Daren J. Zehnle, J.C.L., K.C.H.S. at 3:11 AM No comments:

Email ThisBlogThis!Share to TwitterShare to FacebookShare to Pinterest
Labels: Travels

The Gospels contain a fairystory, or a story of a larger kind which embraces all the essence of fairy-stories. They contain many Marvels - peculiarly artistic, beautiful, and moving: “mythical” in their perfect, selfcontained significance; and among the marvels is the greatest and most complete conceivable eucatastrophe. But this story has entered History and the primary world; the desire and aspiration of sub-creation has been raised to the fulfillment of Creation. The Birth of Christ is the eucatastrophe of Man's history. The Resurrection is the eucatastrophe of the story of the Incarnation. This story begins and ends in joy. It has pre-eminently the “inner consistency of reality.” There is no tale ever told that men would rather find was true, and none which so many sceptical men have accepted as true on its own merits. For the Art of it has the supremely convincing tone of Primary Art, that is, of Creation. To reject it leads either to sadness or to wrath.

It is not difficult to imagine the peculiar excitement and joy that one would feel, if any specially beautiful fairy-story were found to be “primarily” true, its narrative to be history, without thereby necessarily losing the mythical or allegorical significance that it had possessed. It is not difficult, for one is not called upon to try and conceive anything of a quality unknown. The joy would have exactly the same quality, if not the same degree, as the joy which the “turn” in a fairy-story gives: such joy has the very taste of primary truth. (Otherwise its name would not be joy.) It looks forward (or backward: the direction in this regard is unimportant) to the Great Eucatastrophe. The Christian joy, the Gloria, is of the same kind; but it is preeminently (infinitely, if our capacity were not finite) high and joyous. But this story is supreme; and it is true. Art has been verified.

Looking upon the Cross with Queen St. Margaret of Scotland - A Good Friday Homily


Good Friday of the Lord’s Passion

As she lay upon her deathbed, Queen Saint Margaret desired to look upon the Black Rood, the relic of the True Cross of Our Lord encased in ebony that she had brought with her to Scotland from Hungary. When those attending the dying queen delayed in bringing it to her, she exclaimed, “Shall we not be permitted once more to look upon the Holy Cross!”[1] To look upon the Cross, the incontrovertible proof of the love of Our Lord was her dying wish.

Dear brothers and sisters, were we, this day, to find ourselves on our deathbeds, what would our dying wish be? Would it even enter our thoughts to ask to look upon the Cross? Whereas Saint Margaret had to plead with her courtiers to be allowed to see the Holy Cross, Holy Mother Church presents it to us today and, holding it aloft, confidently cries out, “Behold the wood of the Cross, on which hung the salvation of the world!” The holy queen longed to cast her loving gaze upon the Cross. Will we do the same? Will we set our eyes upon it and contemplate the sacred wood and all that it means, or will we simply turn a glance toward it and refuse to let our eyes linger?

We are often quick to avert our eyes from the Cross and from representations of the Passion and Death of Our Lord because we do not like to see the stark brutality that he willingly endured for us. We would rather not remember the ugliness of our sin that led the Lord Jesus to ascend the Cross. We prefer to ignore the suffering of the Cross and would rather look upon an image of the Nativity which seem simpler, safer, and more serene, but we forgot that the only begotten Son of God took on our flesh to also take on our death. We turn our eyes from the Cross because it is cruel. It readily calls to mind the reality of who we are: sinners who will die. Why, then, was Saint Margaret’s last wish to look upon something that seems so unpleasant? Because she had looked upon it so often throughout her life, and meditated upon it so frequently, she understood it was through the Cross that “joy has come into the whole world.”[2] 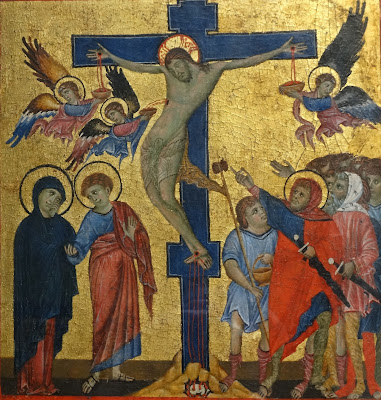 Bishop Turgot tells us “there was a gravity in her joy,” a curious turn of phrase to be sure.[3] Saint Margaret was filled with joy because, having spent so much time pondering the mystery of the Lord’s Cross, she knew the tremendous power of his love, but she was also filled with gravity, with seriousness, because she knew at what cost we receive this love. As we look upon the cross this day, as we adore and venerate the means of our salvation, there ought to be a gravity in our joy, as well, not only today, but every day.

Together with Saint Margaret, let us ask to look upon the Holy Cross one last time and to look upon it as never before. Let us yield to the Lord’s love. Let us put down our defenses, set aside our excuses, and acknowledge our sinfulness to the Lord. Let us allow our hearts to experience the gravity of our sins so that we can come to know the great mercy offered to us through the Death of Christ Jesus our Lord. If we do, we will find ourselves in that place “where pain and delight flow together and tears are the very wine of blessedness.”[4]

Saint Bonaventure wrote beautifully about the grace and power of the Cross:

Then when you have done all good things, begin anew as if you had done nothing. If at times something sad happens, something bad, something tedious, something bitter, and certainly if sometimes a good thing happens by chance, then you should immediately look to the crucified Jesus hanging on the cross. Look there at the crown of thorns, the iron nails, the lance in the side; gaze at the wounds in his feet and hands, the wounds in his head, his side, and his whole body, and recall that this is what he suffered for you, what he bore for you, so that you may know how much he loved you. Believe me: after gazing in such a way, you will find that everything sad becomes joyful, everything heavy becomes light, everything boring lovable, everything harsh sweet and soothing.[5]