Homily on the 124th Anniversary of the Death of Father Tolton

The 124th Anniversary of the Death of the

While this form of prayer in which we are now engaged may not be too familiar to most of us, it is a manner of praying with which Father Gus would have prayed each day, albeit in a different form than we have now. It is a manner of praying that the Fathers of the Second Vatican Council hoped would be celebrated regularly in parish churches throughout the world.[1] 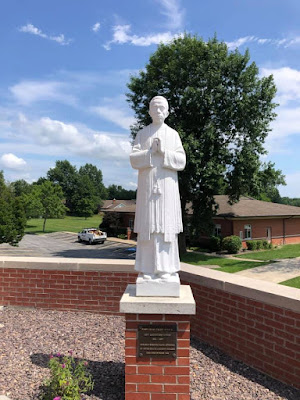 We have gathered for the celebration of Evening Prayer, which is also called Vespers, a part of the Liturgy of the Hours, which is also called the Divine Office. It is the praying of the Psalms in common, much as Jesus would have done. It is a prayer “which is distinguished from other liturgical actions by the fact that it consecrates to God the whole cycle of day and night, as [the Church] has done from early Christian times.” [2] The Liturgy of the Hours has as its purpose not only “the sanctification of the day,” but also “of the whole range of human activity.”[3]

It is a prayer that invites us to contemplation because what might seem to us to be simply the recitation of Psalms actually involves something much deeper, something much more profound. This form of prayer “is truly the voice of the bride addressed to her bridegroom; it is the very prayer which Christ Himself, together with His body, addresses to the Father.”[4] We know that

Christ Jesus, high priest of the new and eternal covenant, taking human nature, introduced into this earthly exile that hymn which is sung throughout all ages in the halls of heaven. He joins the entire community of mankind to Himself, associating it with His own singing of this canticle of divine praise. For he continues His priestly work through the agency of His Church, which is ceaselessly engaged in praising the Lord and interceding for the salvation of the whole world.[5]

But what, I am sure you are by now asking yourselves, does any of this have to do with Father Tolton?

Inasmuch as he was a baptized member of the Body of Christ, Father Tolton was called to conform his life to that of the Lord, to join himself to the Lord’s Jesus life of praise to the Father, just as you and I are called to do. After examining his life, the Church has found that he lived the Christian life to a heroic degree and so calls him Venerable, holding him up as worthy of our imitation. How, then, do we hear the hymn of Christ sung in the life of Father Gus?

Turning our attention to the Psalms we have just prayed, the very same Psalms that Christ Jesus not only sang but also lived, we can see how they took form also in the life of Father Gus, particularly in these words from the first Psalm we prayed: “My enemies whisper together against me”; “they all weigh up the evil which is on me” (Psalm 41:7)

Is this not what Christ Jesus did when he “opened not his mouth” during his Passion (Isaiah 53:7)? Father Gus so joined himself to the Passion of the Lord that he could imitate him even in the extraordinarily painful moments of his life; whereas we so often became angry and bitter during our distresses, Father Gus never did. As Archbishop Nelson Perez recently said, “Rather than shrink his heart,” the many distresses Father Gus encountered “made it bigger.”[6] This, it seems to me, is the great lesson Father Gus wants to teach us: not to allow our hearts to become bitter or shriveled, but to be enlarged with love of Jesus Christ to whom this holy priest shows us how to be united.

Turning our attention to the second Psalm we prayed this evening, we prayed, “God is for us a refuge and strength, a helper close at hand, in time of distress” (Psalm 46:1). We know that

there are many kinds of [distress], and in all of them we must find refuge in God, whether the trouble concerns our income, our bodily health, some danger threatening those we love or something we need to support our life. Whatever it is, there should be no refuge for a Christian other than our Savior.[7]

Father Gus experienced each of these distresses throughout his life, but he always sought his shelter and his strength in Christ Jesus. And because the refuge of Christ proved true (how could he prove otherwise?), we can well imagine Father Gus asking, “Who would dare refuse you honor, or the glory due your name, O Lord” (Revelation 15:3)?

This same question is one our lips this evening and in our hearts as continue anticipating that day that, may it please God, Father Gus will be proclaimed among the Blessed and among the Saints for his worthy imitation of the Lord Jesus. Commenting on the first Psalm we prayed this evening, Saint Augustine of Hippo said, “God has disposed all things and ordered all things for our salvation. He foretold it before we existed, he has fulfilled it in our time, and what he has not fulfilled yet, he will.”[8] Let us therefore beg the Lord to fulfill what he began in Father Gus and allow the Church to bestow upon him the honor we so greatly desire.

In the meantime, may Father Gus teach us to join our lives to that hymn of praise which Christ sings to the Father. May he teach us to experience the whispers and shouts of others with patience and gentleness, to find our strength in the shelter of the wounds of the Savior, not to please ourselves but to please Jesus, and to allow our hearts to grow until they are conformed to the Sacred Heart of the Lord (cf. Romans 15:3).

Father Gus, pray for us. Amen.

[2] General Instruction of the Liturgy of the Hours, 10.

The Fourteenth Sunday in Ordinary Time (B)

Before sending Ezekiel to a rebellious people with the mission to convert them, the prophet tells us that the Holy Spirit entered into him and “set me on my feet” (Ezekiel 2:2). This is a curious phrase he uses, “set me on my feet.” What does it mean?

This phrase can, of course, have several different meanings, either all at once or each in turn. To be set on one’s feet can mean to be strengthened or to be made firm; it can mean to be grounded or set aright or corrected; it can be taken literally, as when a parent stands a toddler up when learning to walk, or it can be figurative.

Whichever of these meanings Ezekiel intended, one thing is certain: he does not speak in the active sense, but in the passive. He does not stand himself up on his feet, rather; he is stood up, which requires a certain docility to the Holy Spirit, something men and women of our day are not much open to.

Ezekiel could not rely on his own strength for the mission given to him, but he could only rely on the strength which comes from the grace of God. This Saint Paul also knew when he heard the Lord Jesus say to him, “My grace is sufficient for you, for power is made perfect in weakness” (II Corinthians 12:9). This is the wisdom of the Cross, a wisdom Saint Augustine and so many other Saints both learned and lived. Have we learned this wisdom? Have learned not to rely on our own strength, or courage, or desire, or determination, or ability, or ingenuity? The way and wisdom of the Cross is not the way or wisdom of America; it is not the way of self-reliance.

As we celebrate this weekend our nation’s founding and independence from Great Britain, it is hard not to think of freedom, which can rightly be called the way and wisdom of America. But how wise are we as a country, as a people, as individuals in the way of freedom?

When he thought about freedom some 1,300 years before the Founding Fathers, Saint Augustine said,

Our nation understands this well enough; it knows the beginning of freedom, but it does not know the perfection of freedom. 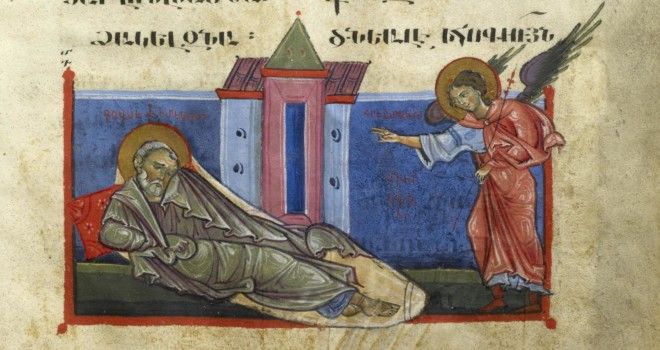 If we consider the life of Saint Joseph, we see that “the logic of love is always the logic of freedom, and Joseph knew how to love with extraordinary freedom. He never made himself the center of things. He did not think of himself, but focused instead on the lives of Mary and Jesus.”[3] In this year devoted to the Head of the Holy Family and the Protector of the Church, we have much to learn about authentic freedom, about human freedom from this man who says little with words but speaks eloquently in deeds. From Saint Joseph, we can learn that

freedom is not unlimited: it must halt before the "tree of the knowledge of good and evil", for it is called to accept the moral law given by God. In fact, human freedom finds its authentic and complete fulfilment precisely in the acceptance of that law. God, who alone is good, knows perfectly what is good for man, and by virtue of his very love proposes this good to man in the commandments.[4]

Indeed, “Christian freedom is never identified with libertinage or with the will to do as one pleases; it is actuated in conformity to Christ and hence in authentic service to the brethren and above all to the neediest.”[5]

In the life and teachings of Jesus Christ, we see quite clearly that “freedom is acquired in love, that is, in the gift of self.”[6] As we celebrate our freedom this Independence Day, may we always remember that our freedom is not freedom to do whatever I want, bur rather freedom for love; it is “it is following Christ in the gift of self, right up to the sacrifice on the cross.”[7]

Let us, then, embrace the true freedom of the sons and daughters of God. Let us, like Saint Joseph, strive to use our freedom for loving service of Jesus and his Mother and everyone whom they love. Let us use our freedom to open our hearts to the Holy Spirit so that he might enter into us, stand us up, and send us to a rebellious people, to a people bound in false notions of freedom and set them free to live in love, in the perfection of freedom. Amen.