The Pontifical Swiss Guard are famed for a great many reasons, not the least of which is their uniform. Contrary to popular belief, it was not designed the artistic genius, Michelangelo.
The current uniform of the Swiss Guard was first worn in 1914, having been designed by a commander of the Guard. 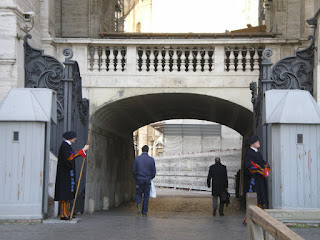 At the entrance to the left of the Basilica leading to the sacristy, the scavi tour, and some of the offices of Vatican City. The guards are wearing their cloaks because it is early in the morning and a bit cool.

The same entrance as seen from the steps of the Basilica later in the afternoon. 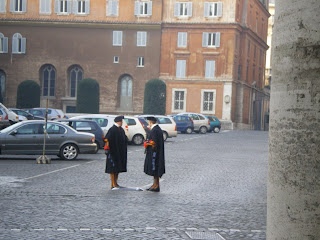 Two guards early in the morning at the entrance by the Paul VI Hall, which also leads deep into Vatican City. The gates are open to more easily allow Vatican employees to driver their cars through. 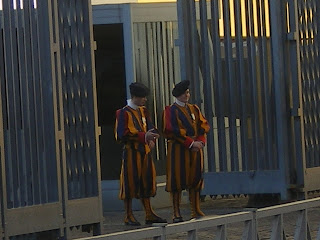 This is the same entrance later in the day. 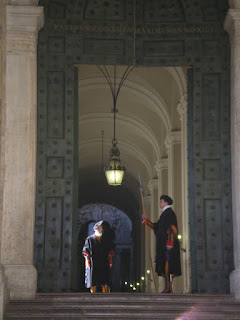 At the Bronze Doors that lead into the Apostolic Palace. 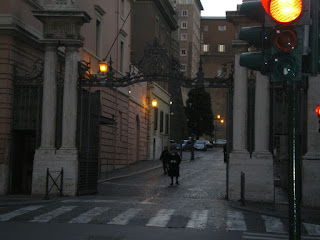 At the Porta Sant' Anna, the entrance to Vatican City, so named because the Church of Saint Ann is through the gate and immediately on the right. It is the parish church of Vatican City. 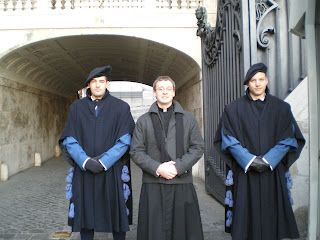 Here it is: the obligatory picture with the Swiss Guard. As it is still rather early in the morning, the guards are still in their night uniform.

They had a good sense of humor. We three priests each had our picture taken with them, but the first of our number was a bit hesitant in approaching them after they accepted our request. The second priest of our number said to him, "They won't bite." They seem to have been quite the linguists (we'd already spoke with them briefly in Italian and German) and one of the guards replied, "We've already eaten today."