In honor of the day

Update: The picture of the Chair of St. Peter in Antioch has been added.

Two years ago today, being a Wednesday, the Holy Father Pope Benedict XVI devoted his Audience address to the Feast we celebrate today, the Feast of the Chair of Saint Peter, the same day he named fifteen Cardinals (which, of course, you should read today).

Dear brothers and sisters, in the apse of St Peter's Basilica, as you know, is the monument to the Chair of the Apostle, a mature work of Bernini. It is in the form of a great bronze throne supported by the statues of four Doctors of the Church: two from the West, St Augustine and St Ambrose, and two from the East: St John Chrysostom and St Athanasius.

I invite you to pause before this evocative work which today can be admired, decorated with myriads of candles, and to say a special prayer for the ministry that God has entrusted to me. Raise your eyes to the alabaster glass window located directly above the Chair and call upon the Holy Spirit, so that with his enlightenment and power, he will always sustain my daily service to the entire Church. For this, as for your devoted attention, I thank you from my heart.

Since we cannot today be in Rome - most of us, at least - I offer you this picture of Bernini's great work and invite your prayers for His Holiness: 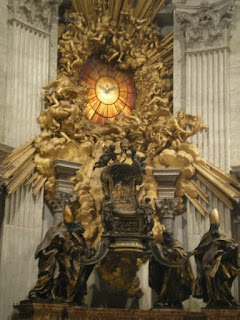 In his address, Pope Benedict reminds us that the See of Saint Peter - after the Upper Room - was in the city of Antioch - on the Orontes - where the faithful were first called "Christians" (Acts 11:26). Here is a picture of what is believed to have been the chair used by the Prince of the Apostles in Antioch: 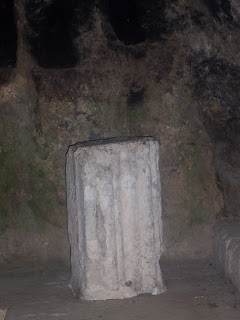 I am blessed to have been in both locations, having prayed for Pope John Paul II in the Antioch (and in Rome) and for Pope Benedict XVI in Rome.

Today, let your sacrifices be offered in loving prayer for the Successor of Saint Peter, Pope Benedixt XVI, the Teacher, and for his intentions.
Posted by Rev. Daren J. Zehnle, J.C.L., K.C.H.S. at 5:03 AM

Email ThisBlogThis!Share to TwitterShare to FacebookShare to Pinterest
Labels: Chair of St. Peter