The ordination and first Mass

Saturday's ordination of transitional Deacon Kevin Muniz and of Father Tyler Miller went very well. The cathedral was full, with a greater number of the faithful than I expected. (I am told that about 115 youth attended the Vocations Rally afterward.) A good number of my brother priests of the Diocese were also present at the ordination, together with several priests from other Dioceses and Orders. 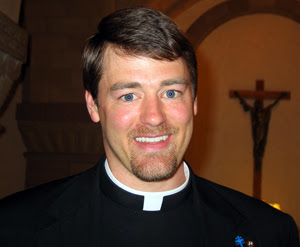 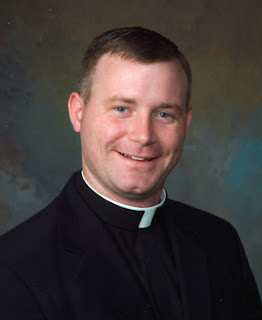 Fr. House and I (formerly the two youngest priests in the Diocese) served as the Masters of Ceremonies for the ordination. From our perspective, the Liturgy was a bit bumpy, but - as is usually the case - for everyone who has not served as an MC it was a beautiful Liturgy. Sometimes we MCs are too particular for our own good, though all out of great love of the Liturgy and devotion to the Eucharistic Lord.

This was the first time since Bishop Lucas was sent as our Bishop that we ordained a deacon and a priest in the same Mass (so far as I know we'd only done it once before that). I don't expect we'll be doing it again for several years simply because it gets to be a bit bulky, if you will, in places. Nonetheless, all went well. Nobody was maimed or lost :)

With the ordination of Fr. Miller, the special honor (I'm only making that part up) of being the youngest priest of the Diocese is no longer mine; I am now the second youngest priest.

The Cathedral choir sang superbly! I was rather impressed and very pleased. The music was as follows:

Prelude: "Praeludium in D Major" by Dietrich Buxtehude
Entrance: "All People That on Earth Do Dwell" (One of my personal favorites)
Kryie: "Mass of Light," by David Haas
Gloria: "Jubilation Mass," by James Chepponis
Allelua: "Jubilation Mass," by James Chepponis
Laying on of Hands: "Prayer of St. Patrick" arranged by John Rutter (I don't remember hearing this yesterday so that might not have done it, but I also might have just missed it; Rutter's music is excellent)
Fraternal Kiss: "Veni Creator Spiritus"
Acclamations: "Mass for the City" by Richard Proulx
Communion: "One Bead, One Body" by John Foley and "Ave Verum Corpus"
Concluding: "Now Thank We All Ou God"
Postlude: "Triumphal March on 'Now Thank We All Our God'" by Sigfrid Karg-Elert

The readings chosen for the Liturgy were:

Sunday afternoon I had the honor of serving as the Master of Ceremonies at Fr. Miller's first Mass of Thanksgiving at Immaculate Conception parish in Mattoon. The last time I was in the church in Mattoon was for the Mass in which Tyler declared his candidacy prior to leaving for the North American College (I was the MC then as well).

Thirty or more priests concelebrated the Mass, leaving very little room in the sanctuary to move about. The parish choir also sang with great skill and the church was full. I don't have the program from the Mass handy at the moment to give you the songs. Fr. Miller celebrated a beautiful Liturgy.

Fr. Miller has been a good friend over the years and I am happy to have him back with us from Rome. In fact, Fr. Miller has been assigned as the Parochial Vicar of Our Lady of Lourdes parish in Decatur, effective July 1st.
Posted by Rev. Daren J. Zehnle, J.C.L., K.C.H.S. at 7:07 PM