My great-uncle, the priest 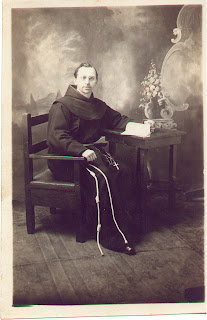 Among the numerous priests to come from St. John the Baptist parish in Quincy is the Reverend Father Berard Zehnle, O.F.M., my great-uncle.

(We also have a couple of nuns in our family history as well, but I do not know very much about either of them.)
Given the name Andrew at birth, he and his brother August were the second set of twins to his parents, Ambrose and Mary (twins seem to run in the family; I am a twin myself, though my twin, Matthew, died shortly after birth).
Andrew and August were born in Quincy - the Gem City - on 3 January 1879. The twins were baptized at Immaculate Conception parish in Quincy just four days later.
His Excellency, the Most Reverend James Ryan, Bishop of Alton, confirmed the boys at St. John the Baptist parish on 10 June 1894.
Andrew was invested with the habit of the Order of Friars Minor on 25 July 1901 in Teutopolis, Illinois (just a few miles from where I now live). He made his simple profession on 29 July 1902 and his Solemn Profession on 17 August 1905 in the city of the Teutons.

Brother Berard received the tonsure and was ordained to the subdiaconate in St. Louis, Missouri on 29 June 1906. He was ordained the Sacred Order of Deacons on 28 June 1907 and to the Priesthood of Jesus Christ on 26 June 1908, both in St. Louis.
He died in Jordan, Minnesota on 28 May 1937. He is buried in Quincy.
In the parishes in which he served, Fr. Berard was known for his love of drama.
If you would be so kind, please say a prayer for him. Here are a few more pictures of Fr. Berard: 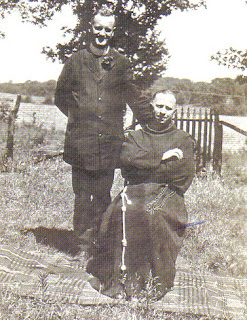 Fr. Berard is sitting down, but I do not know the priest standing next to him. Does anyone recognize this priest? 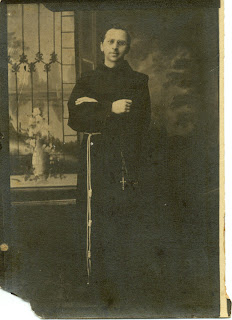 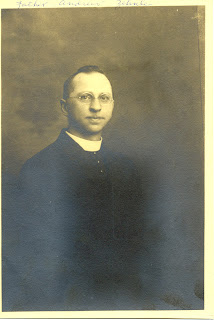