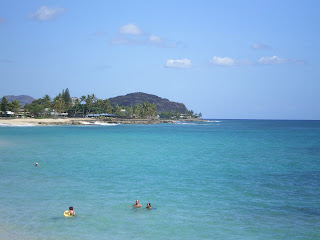 I safely arrived at the airport in Honolulu about 7:30 p.m. local time Monday evening. The airport is easy to navigate and, after being collected by my friend, I arrived at his house and went to sleep after a bit of visiting.

Having been in Hawaii not even twenty-four hours, I have sustained the first significant injury of my life. I am grateful that the injury is not a broken bone, but a dislocated shoulder.

Yesterday we collected a dining room table he had ordered and set it up in the dining room. He moved into this house only a short time ago so much work needs yet to be done. After a short drive-by tour of the island – Oahu – we returned for the internet guy to set up his internet connection.

Once that was done we went to Makaha beach, pictured above. It is a beautiful location and we will return there later for pictures of sunrise and sunset. No sooner had I been in the water five minutes than the current took me out from shore over a drop off point.

Now, with all of my education, I should have been smart enough to realize that if the water took me out from shore, the same water would bring me back to shore. But in such unexpected instances panic kicks in.

I began to try to swim back to shore only to be brought back in by the waves, thereby slamming my left arm into the shore. It hurt rather a bit, but at least I was back on land.

About a minute later I looked down at my left shoulder and realized very plainly that I had dislocated the shoulder. I do not recommend this to anyone.

We drove to the hospital and, four hours later, my shoulder was back in place. The nurse described what happened as “a classic situation,” not that that made me feel any better or any less foolish.

I am not to do anything very significant with my left arm for several days, and certainly no over-the-head-or-shoulder motions for a couple of weeks. Most dramatically, this means putting on vestments will be somewhat tricky – though manageable – and the elevation of the chalice and host during the doxology will not be possible for some days. Oh, and collecting my luggage and getting it into my car will be a challenge, but I am confident helpful people will be nearby.

Even so, my sight-seeing will continue and I’ll still return to the beach but I’ll mostly stay out of the water. Today we’re off to Waikiki and St. Augustine’s by the Sea and maybe the aquarium and zoo, too. We’re largely playing it by ear. The only thing really planned is the Mass for Blessed Damien tomorrow morning.
Posted by Rev. Daren J. Zehnle, J.C.L., K.C.H.S. at 1:30 PM