The bells of St. Anthony's 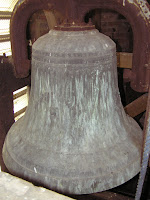 The bells of St. Anthony of Padua parish once again call the faithful to humble prayer.

Sometime ago - while I was away in paradise on earth - the bells in the tower of the church were “electrified.”

In reality, external hammers that are made to strike the bells via a computerized system, thereby making the old ropes – and the men to pull them – unnecessary, were installed. The bells have sadly not rung here on any sort of a regular basis in at least five years. The Verdin Company out of Cincinnati, Ohio did the work for us. They were great to work with and have my high praise and hearty recommendation.

After examining the condition and quality of our bells, the Verdin Company sent a letter to us clarifying our options. The letter says this about the work we had done:

The electrification of the bells will allow for the programmed sounding of the Angelus, Daily Call to Mass Bell, Weekend and Festive Peal of three Bells, the Funeral Toll and, if desired, the ability to toll the respective, desired, hours of the day. The program clock incorporates a battery back-up memory that will automatically correct after a power failure and will also correct for the Spring and Fall time changes that have been newly implemented. The programmer will also have an extended range, wireless, remote control provided for manual operations [it’s huge!]. This is especially nice for weddings, funerals and other “out of the ordinary” masses [sic] that may not be programmed.

The Angelus now sounds at 8:00 a.m. (we want to maintain friendly terms with the neighbors), 12:00 p.m. and 6:00 p.m. The call to Mass is heard ten minutes prior to our daily 8:30 Mass (6:20 might be too early for the neighbors, but if we rang the Angelus at 6:00...) and before the Sunday Masses. The bells do not currently toll the hours, but I think I'll be trying to do some convincing on that one.

Needless to say, I am delighted to hear the bells finally tolling! It reminds me of going to Mass as a child at St. John the Baptist in Quincy. The bells were always tolling as we rolled into the parking lot. The best part is that the ringing is of the actual bells, with the same tone and pitch they would have if swung manually.

We have three bells in the tower, one steel and two iron, named Anthony, Aloysius and Gabriel.

The steel bell is 27” in diameter and weighs roughly 300 pounds. This bell was installed in 1874 and was probably cast by the C.S. Bell Foundry in Hillsboro, Ohio.

The largest of the bells, cast of iron, is 47” in diameter and weighs a whopping 1,430 pounds! This bell was also installed in 1874 and probably made by the C.S. Bell Foundry.

The third bell, Anthony, cast of iron and the best of the three, is 29½” in diameter and weights around 500 pounds. This bell was cast by the J.G. Stuckstede Bell Foundry in St. Louis, Missouri in 1859, one year after the founding of the parish. This bell bears the following inscription that encircles an appliqué of the Blessed Virgin:
San cte Anton J. Patrone DVLC issJME Jnter Cede Pro Nob Js
It translates, “Holy (Saint) Anthony, patron most sweet, intercede for us.” If anybody can clarify the odd spacing and capitals, I would be much obliged.

Now we just need to find the funds for a fourth bell so we can have the Westminster chime… I would "baptize" it...Benedict. 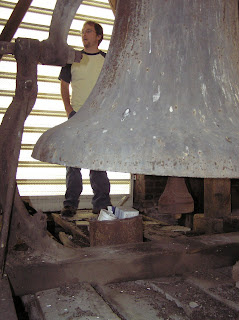 Glenn, one of janitors, stands near one of the bells.