There is a web site to promote the city of Quincy with the address www.quincylifeisgood.com. How true this is!
A city of nearly 50,000 people, Quincy feels like a small town filled with beautiful trees, flowers and homes. Quincy is known for many things: architecture of all kinds (even a moorish castle, as it's called here), trees, history (one of the Lincoln-Douglas debates occurred here; Quincy was a major stop on the underground railroad; the first black priest in America was trained through Quincy; and many other things, besides), friendly people, and for it's dogwood trees. Each May the dogwoods bloom and the city turns especially beautiful. I miss that very much. Nonetheless, it is great to back!
Popular demand has requested pictures of my nephew, Matthew William. He was not very photogenic last night so I'll post two olders pictures of him. For whatever reason, he liked my sandals a lot last night. I'll see him again tonight at Mass and I'll try to get a few pictures with him. 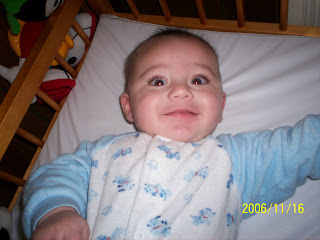 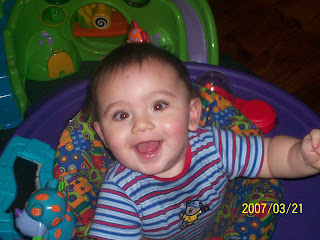 He is named after my twin brother, Matthew William, who died shortly after birth. Prior to his birth I was arguing that he should be named George something-or-other to restore a family tradition that named the firstborn son George. My father was George William, his George Arthur, his George, his Ambrose (Ambrose was also a named I supported strongly).

I'm not quite sure what happened with me. There are no other Darens (or Darrens or Darins or Derons [at one time I was friends with three other Darens and we each spelled our name differently; three of us worked on the same floor at the newspaper]) in the family tree so far as I have ever been able to find. I very much would have enjoyed being George something-or-other Zehnle IV and I would have used it well. I supposed now my nephew will be Matthew William Zehnle II, a fitting tribute to the memory of my twin.