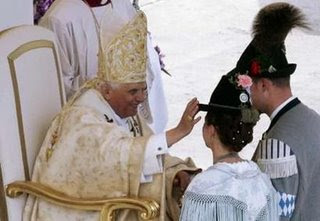 What exactly does one say when kneeling before the Holy Father?

I awoke this morning at 4:00 - seemingly for no reason. At the time I thought I might be able to catch the Mass for Pope Benedict's 80th birthday. Instead, I tuned in just after he finished the homily.

As I'm sure you can well imagine, I was rather disappointed at my timing. Even so, I continued watching the Mass through the preparation of the altar at which point I returned to bed.

As I watched His Holiness receive the gifts I was particularly struck by his gentleness and obvious love of those who presented the gifts to them. Watching their short - though certainly memorable - conversations, the above mentioned question occured to me: Just what do you say to the Holy Father?

I might be tempted to ask, "Your Holiness, where is that gorgeous shell chasuble?" (I'm especially fond of it.)

As I pondered this I also noticed the loving tap on the shoulder he gave to those kneeling before him to let them know they could now take the gifts to wherever they were headed. He did so with a beautiful smile and I wondered what it might be like to be tapped on the shoulder by this man and tears welled in my eyes. I love this Pontiff very dearly. Now, if only there were an English translation of the homily available.

May God bless him with many more years of a glorious reign!