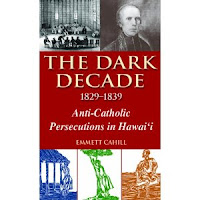 Beginning with the arrival of the Calvinists from the United States of America, Cahill traces the growth and spread of Christianity within the islands, with a particular focus and concentration on the island of Oahu, the seat of the Hawaiian monarch.

He skillfully demonstrates the Protestant missionaries' bias against those of the Catholic faith, and their ignorance of the true teachings of Catholicism.  Without condemning the Hawaiian Kings and Queens for their persecution of Catholics - which he repeatedly notes seems very much not in keeping with the nature of the Hawaiian people - shows how the missionaries coerced the monarchs toward persecution.

The history of anti-Catholicism across the globe - and especially in our own country - is too little known.  This book will prove helpful for both those well versed in the history of Hawaii and for those who know nothing about the islands' past.
Posted by Rev. Daren J. Zehnle, J.C.L., K.C.H.S. at 9:04 AM