Those who travel Interstate 70 know of Effingham primarily for one reason: the giant Cross at the Crossroads that stands outside of Effingham.

The Cross at the Crossroads was dedicated ten years ago on September 16, 2011. 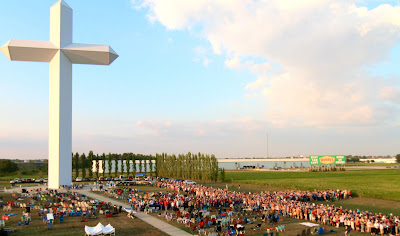 It was hoped that about 1,000 would attend the ceremonies to help break a world record by forming a human cross with more than 900 people, which had been the record.  It seems that nearly 3,000 people turned out - from a city of some 12,000 - for the event.

Email ThisBlogThis!Share to TwitterShare to FacebookShare to Pinterest
Labels: Effingham