The day of my priestly ordination was a most beautiful and joyous day; I was so happy the day finally had come.

There are, of course, a number of things that stand out in my mind, but one of the most touching aspects of the Rite of Ordination came at the moment when Bishop Lucas exchanged the sign of peace with me and my six newly ordained brothers. 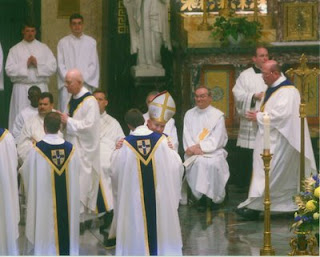 This ancient gesture welcoming the newly ordained into the Order of Priests is exchanged after the promises of the Elect are made; after the Bishop imposes hands; after the prayer of ordination; after the investiture with the chasuble; after the anointing of hands, and after the handing over of the bread and wine. It comes as the conclusion of the rite of ordination.
Whereas the priests who exchange the sign of peace with the newly ordained do so as brothers, the Bishop does so as a father. If the Bishop is to regard his priests as his sons, then his priests are to regard him as their father. Pope Benedict XVI has frequently spoken about this dynamic.
It was this aspect of the sign of the peace that so touched me. Since my ordination Bishop Lucas and I have not always agreed on everything, but I have always tried to view him with respect as my spiritual father. And now he is entrusting me with the care of two of his parishes.
In a spirit of filial obedience I will go, trusting that, like many fathers with their sons, he sees abilities and skills in me that I do not see.
Posted by Rev. Daren J. Zehnle, J.C.L., K.C.H.S. at 8:08 PM