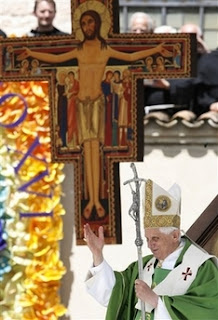 Through the workings of Divine Providence, the Lectionary readings for the Eleventh Sunday in Ordinary Time, which coincides this year with the celebrations marking the eight-hundredth anniversary of the conversion of Saint Francis of Assisi, speak of conversion and forgiveness.

Seeing his beautiful smile, tears welled up in my eyes. May the Lord grant him many more years of a glorious reign!

On another note, too many of the concelebrating clerics are wearing ball caps. That's what sunglasses are for.

Archbishop Sorrentino welcomed the Holy Father with a joy apparent in his voice and when the Pontiff spoke the opening words of the Mass a manifest joy was in his voice, as well.

The music - including the chant tones - seems to be one not used at Papal Liturgies prior to this pastoral visit. Saint Francis' prayer before a crucifix was sung after Holy Communion and his Canticle of the Sun was sung as the recessional.

As in the past, the Holy Father was vested in a green chasuble, choosing to vest according to the liturgical calendar. In this way Pope Benedict XVI keeps the focus off of himself and on Christ. He will not allow a Papal Liturgy to top, as it were, the Sunday celebration. "What do we want to speak of today but the Lord?" he asked as he began his homily.

The choir sang the Alleluia after the proclamation of the Gospel while the Holy Father blessed the faithful with the Book of the Gospels. Is this normal?

He has brought with him the beautiful mitre that he wears so frequently. He seems to have a handful of mitres that he prefers.

A Franciscan nun was on hand to translate the Mass into sign language.

In his homily for today's celebrations, Pope Benedict XVI spoke as the teacher par excellence that he is. One line that I caught and that stuck with me as I was searching for news items was, "When we turn towards love we turn from bitterness to sweetness..." More on the homily will come when it is available.

The overall pace of this Papal Liturgy seems to be moving a bit faster than it typically does at the Vatican. Perhaps this is because of a smaller space, although the piazza in Assisi isn't exactly small.

The peace of Assisi pervades today's celebrations as people camp out on rooftops for a better view. The congregation is large but it doesn't seem as boisterous or distracted as it often does in St. Peter's Square. Everyone who has been blessed enough with the opportunity to visit this holy city knows of this peace. Saint Francis and Saint Clare are surely smiling down upon the Holy Father today.

As I offer my observations I must say that I am disappointed at how little attention this pastoral visit has received in the Catholic blogosphere and in the Catholic news media. Not only is this the 8th centenary of the conversion of Catholicism's arguably most popular saint - even if severely misunderstood - it also a pastoral visit of the Holy Father that can be a tremendous aid to evangelization. The next time the Holy Father travels lets get on top of it and give the pastoral visit the attention it rightly deserves.

Be sure to ask the Lord to bless abundantly those many men and women throughout the world who follow the Rule of Saint Francis and of Saint Clare, together with the many laity who follow the example of this holy man and woman as secular Franciscans.

Now, as the first rays of dawn are detectable, I am off to bed for a few more hours' sleep before concelebrating Mass.