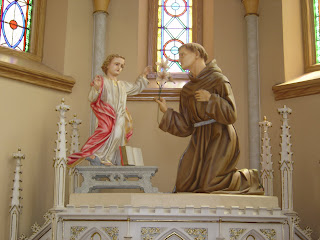 In 1946, Pope Pius XII declared Saint Anthony of Padua a Doctor of the Church giving him the title of the Evangelic Doctor. It is an eminently fitting title for this son of Saint Francis of Assisi who loved his education and knowledge, but who loved Christ Jesus more.

Having encountered the bodies of five Franciscans martyred in Morocco, Anthony was filled with a great desire to give his life for the Gospel in the same way. He left the Augustinians -whom he joined ten years earlier - and entered the Order of Friars Minor upon condition that he would be sent to Morocco to die there a martyr’s death.

Yet, as is so often the case, the gift that Anthony wanted so desperately to give was not the gift that the Lord would ask of him. Falling ill upon arrival in Morocco, Anthony boarded a ship headed back to Portugal and, after enduring heavy storms at sea, found his way to Sicily instead.
The excellent knowledge he acquired with the Augustinians – and his own deep intellect – he kept secret from the Franciscans, never speaking of it. It happened that his great gift was discovered at the ordination of Augustinian and Dominican priests in Forli. Apparently nobody was selected to preach. The Bishop then asked one of the Order of Preachers to preach but each of those present refused. The Franciscan superior ordered Anthony to preach whatever the Spirit told him. He opened his mouth and all were amazed at what they thought was an uneducated and simple man.

As the friars increased in number they needed someone to teach their brothers before being sent out to preach. Having discovered his very effective gift, they asked Anthony to teach the brothers. He refused to do so without the permission of Saint Francis. Francis wrote to his brother:

To Brother Anthony, my bishop, Brother Francis sends greetings. It is agreeable to me that you should teach the friars sacred theology, so long as they do not extinguish the spirit of prayer and devotedness over this study, as it is contained in the Rule. Farewell.

Anthony sought Francis’ permission Francis distrusted academics. Too often they lost their focus and turned from Christ Jesus to intellectual pursuits and pleasures, a reality with which we still live.

Each of us is educated and seeks to continue our learning for service to the Church. The risk we share is to devote ourselves too much to our studies and so neglect the spirit of prayer to which each of us is called and to neglect our pursuit of the virtues. There is also another risk which education offers us, that of over-confidence and pride. The more that we know and understood the more we can be tempted to trust in our own intelligence and aptitude.

Anthony succumbed to neither of these temptations because he knew, with Saint Paul, that "our qualification comes from God" and not from ourselves or our achievements (II Corinthians 3:5).
His great intellect and knowledge were both a gift from the Lord and not of his making.
When God unleashed Anthony’s tongue, the ministry of the Spirit was glorious indeed (cf. II Corinthians 3:8). His words moved people within the depths of their hearts because he followed the teaching of St. Francis who said, "The preacher must first draw from secret prayers what he will later pour out in holy sermons; he must first grow hot within before he speaks words that are in themselves cold."

This Anthony did in his study of the Scriptures and through them he came not only to know Christ Jesus, but also to play with the Child Jesus and to hold him in his hands. As God bent low to embrace Anthony, so Anthony bent low to embrace God. In the embrace of God Anthony experienced his greatest joy. "What greater pleasure or joy can there be for the human mind," he asked, "than to be ‘before him’ with whom, and in whom, is all that is true; and without whom everything that seems to be is nothing, and all abundance only a lack?" Let us, with the Evangelic Doctor, seek our greatest joy not in intellectual pursuits but in Christ Jesus.
Posted by Rev. Daren J. Zehnle, J.C.L., K.C.H.S. at 4:32 PM