Bishop Silva: The mana and iwi of Mother Marianne is not a spiritual candy

Yesterday morning the relics of Saint Marianne Cope were translated to and enshrined within the Cathedral Basilica of Our Lady of Peace in downtown Honolulu. 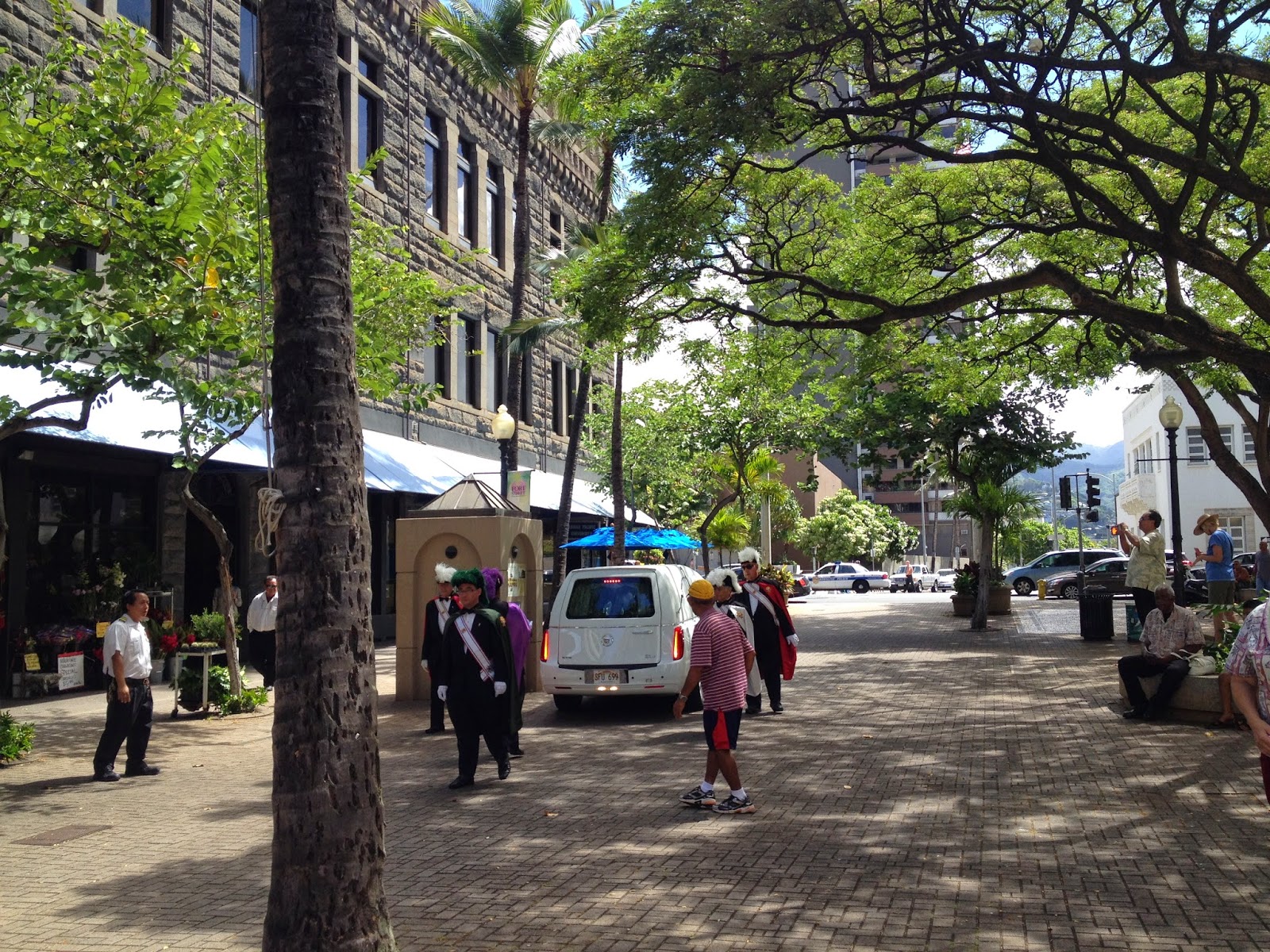 His Excellency, the Most Revered Clarence "Larry" Silva, Bishop of Honolulu, received her relics outside the front doors of the Cathedral Basilica, together with a sizable gathering of the faithful, priests, deacons, and women religious, as well as members of the Hawaiian royal societies. 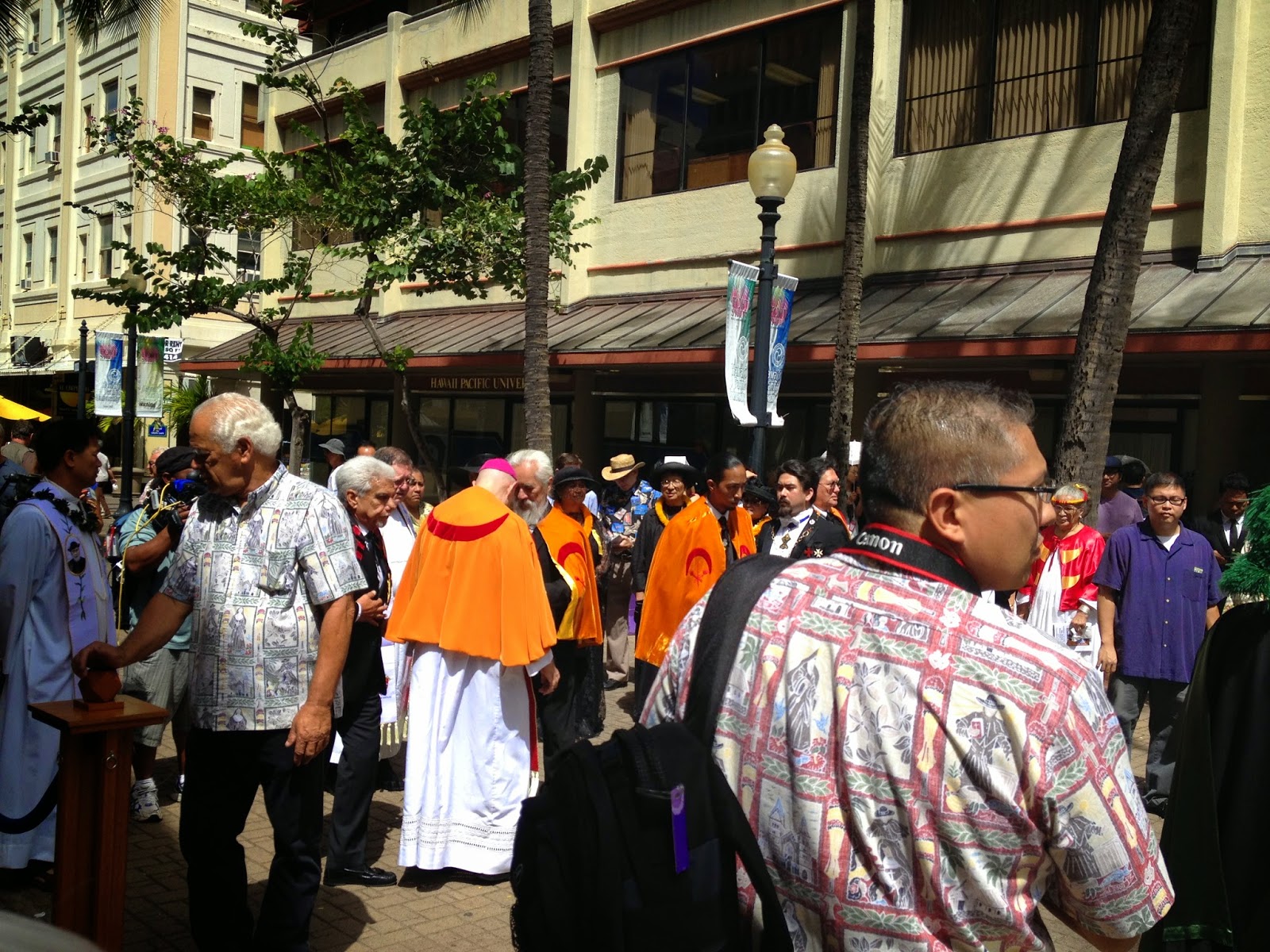 Already by this time, the faithful crammed into a standing room only Cathedral Basilica, including the residents of Kalaupapa.

Wearing his cape of the Royal Order of Kamehameha I, Bishop Silva inspected the seals of the box containing Saint Marianne's remains to certify their authenticity after their departure from Syracuse, New York.


The relics of the Beloved Mother of Outcasts were then carried in procession into the Cathedral Basilica by four Sisters of St. Francis of the Neumann Communities, to which Saint Marianne belonged, one the same canoe that once carried the relics of Saint Damien into the Cathedral Basilica (the same church in which he was ordained a priest) while the Litany of the Saints was sung:


Post by Our Lady of Good Counsel - Youth & Family Ministry.


Once her relics were placed the before the altar, the Bishop of Honolulu led the faithful in the praying of mid-pray, after which the Holy Mass was offered in thanksgiving for the return of Saint Marianne. During his homily, Bishop Silva spoke of the Hawaiian notion of mana:

Mana is the Hawaiian word for a spiritual power, an aura possessed by a person or place that can be almost palpable to others.  Although it is a word with great meaning in the Hawaiian culture, the concept is shared by other cultures, indeed by the Catholic Church.  Anyone who has been to the Kalaupapa Peninsula on the island of Molokai, where St. Marianne and St. Damien devoted themselves to the outcasts and the abandoned, knows that that place has a very strong mana.  Despite all the suffering and chaos that once characterized the place, one can feel a strong sense of the holy there.  It is quite palpable.  It is a power, a force, a spirit that touches and changes hearts; that heals and gives courage.

It is the mana of St. Marianne that brings us together today.  The mortal remains of this frail creature of God, made from dust and returning to dust, have an incredible spirit of their own, an aura that makes us want to be near them, to be changed by the very odor of holiness that emanates from them.  We want to touch the relics of this woman who dedicated herself to healing, so that we may be healed and may be healers.  To think of her from afar and contemplate her goodness is certainly a noble and enriching experience, but to be in physical proximity to her iwi, her sacred remains, is to be able to catch her mana. Her faith in the Lord Jesus can be contagious, and so we come to enshrine her relics so that all who come here may catch this faith and spread it to others.  We will venerate her relics forevermore in this sacred temple, so that we can catch her mana and, like her, have the strength “to comprehend with all the holy ones what is the breadth and length and height and depth” of the love of Christ.”

Although yesterday was a day of great pride and joy for the Diocese of Honolulu, Bishop Silva cautioned that the return of the relics of Mother Marianne to the islands is "not so that we can be filled with some sort of spiritual candy that will sweeten our hearts for a moment but ultimately bloat us and make ourselves bigger," but "so that the Holy Spirit may penetrate into our bones and lead us to feed the hungry on our streets, to welcome the stranger on our borders, to clothe those who are naked and vulnerable with the education that will adorn them in the finery of wisdom, to free those imprisoned by their own self-worship." 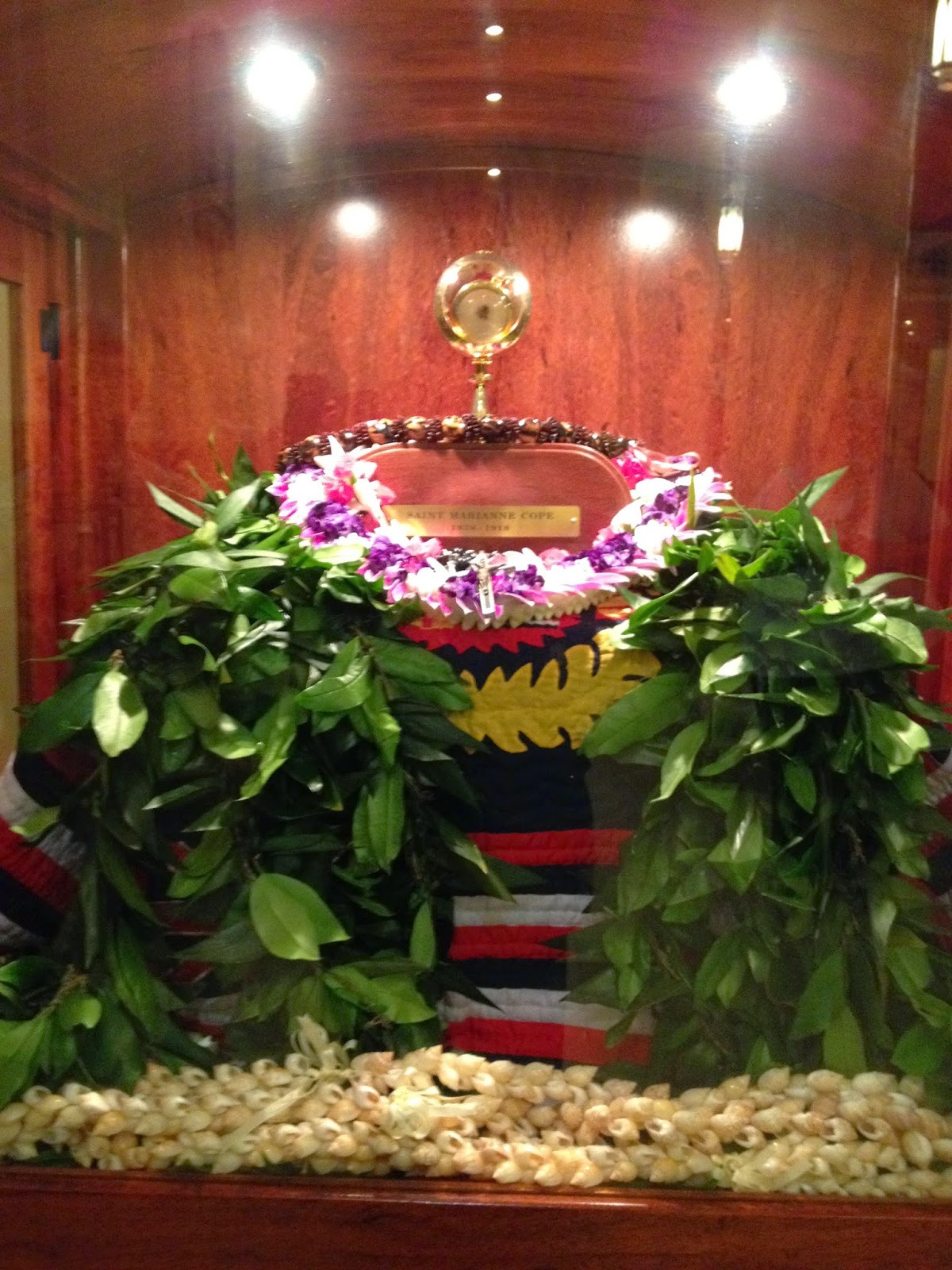 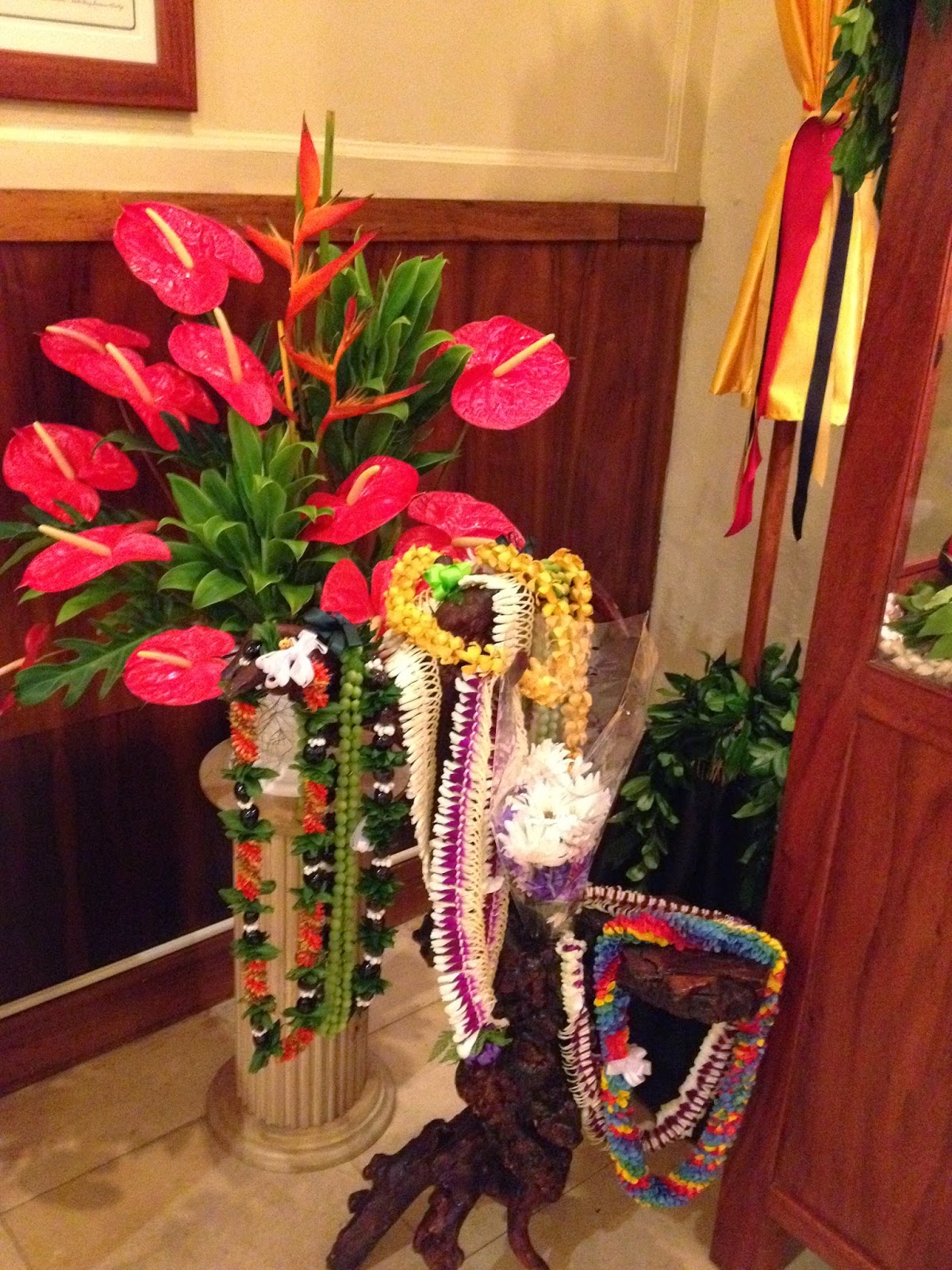 After several hours in which the faithful venerated the relics of Saint Marianne, the day concluded with the praying of Vespers, again presided over by Bishop Silva.

All in all, it was a wonderful day filled with much aloha and even many tears of joy.

A Catholic Mom in Hawaii has also posted several photos from the reception of Mother Marianne's relics. Being on the opposite side of the gathering, she had a better view than me.
Posted by Rev. Daren J. Zehnle, J.C.L., K.C.H.S. at 1:35 PM