A memorial to the recent martyrs of Kirkuk

Contrary to popular belief, the age of the martyrs is far from over.

This past Sunday the Most Reverend Louis Sako, Archbishop of Kirkuk, dedicated a memorial to the Christians martyrs of the city of Kirkuk since the beginning of Operation Iraqi Freedom in 2003.

The names of 36 martyrs - both Catholic and Protestant or Orthodox - are displayed on the memorial, below a statue of the Sacred Heart: 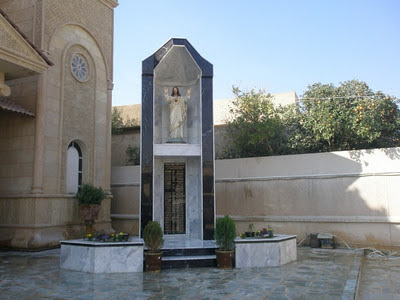 At the top of the memorial a statue of the Sacred Heart of Jesus, who is also patron of the Cathedral of Kirkuk, "with open arms" in a gesture of welcome to the faithful and "blessing and courage to the families" of victims of the war.

During the ceremony inaugurating the monument, Mgr. Louis Sako said that "the blood of martyrs is precious" and is a "gesture of reconciliation for all Iraqis", especially in recent weeks in which the withdrawal of U.S. troops from the country has been completed. "We are living in preparation for Christmas - added the archbishop - which announces peace on earth for all people of good will." For this, he concludes, "we Christians are called to become a bridge" to be able to "unite all cultures" [more].