N.B.: What follows is an edited post from the archives on Saint Nicholas of Myra, whose memorial we celebrate today.

The fourth century Bishop of Myra (in present-day Turkey) Saint Nicholas has long been a personal favorite of mine, and for reasons far greater than that red suit wearing, cookie-scarfing, Santa Claus. In fact, I have a statue of St. Nicholas in my office throughout the year.

There is a little known event – and maybe questionable - in Saint Nicholas’ life for which he earns my great esteem and admiration.

It seems that this saintly and generous Bishop was present at the Council of Nicea in 325, which was called to settle the division caused within the Church over the teachings of the arch-heretic Arius. 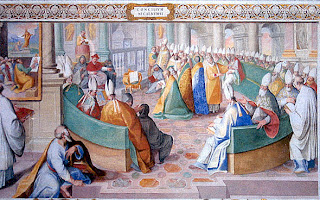 Arius, you might recall, went around singing the little ditty, “There was a time when he [Jesus] was not,” meaning that Jesus was a creature like us - though the greatest of creatures, and, hence, not fully God.

His heresy caught on precisely because it was sung (we’ve all had an annoying commercial jingle stick in our head or some banal song that is supposed to be ‘sacred’ music but sounds more like something you’d hear on Barney).

At any rate, Arius’ claim amounts to denying the divinity of Jesus Christ and, as Saint Athanasius so excellently reminds us: if Jesus isn’t divine he has no power to save us. He is just another man, like us, with no power over sin and death. Apparently Arius didn’t see it this way and kept on singing, dividing Christianity in two.

The story goes that at the Council of Nicea Saint Nicholas became so angry over the teachings of Arius that he actually struck him in the face! The other Bishops then stripped him of his office and his vesture and appointments and put him in prison. That night, our Lord and his Mother visited him and gave him back his episcopal vesture. The next morning the guards were stunned to find the Saint with his full appointments.

Now, one might possibly fault Nicholas for his act of violence, but it should also be remembered that his anger was a righteous one for the question of Jesus' divinity is, truly, a matter of life or death [to be sure, I don't condone running around punching heretics].

Though no account of this story is found in the records of the Council it seems to connect Saint Nicholas with Christmas in a way far more profound than the simple anonymous giving of three bags of gold for dowries. It demonstrates not only Nicholas’ generous heart but also his deep love of the Lord, particularly in his Incarnation.

For more on this Saint who became Santa Claus through a confusion of language, visit the following: