On the founding pastor

I was both surprised and delighted this morning to find a short biography of the founding pastor of my home parish of St. John the Baptist in Quincy, Father Joseph Still, this morning on Pat McNamara's blog: 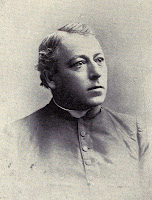 It was on Easter-Tuesday morning,April 3rd, 1907. Large crowds of people wended their way to St. John's Church, of Quincy. Their features bore the stamp of grief and mourning. The solemn obsequies prior to final interment were had that morning at which Rev. P. Andrew, O.F.M., delivered the funeral oration. The news of the death of this popular and beloved priest were everywhere received with expressions of sympathy and sorrow, for to all, Catholics and Protestants alike, he had proved a warm-hearted, loyal friend and benefactor. Broad-minded, liberal and kind frank and just, strong in mind and strong in character, such were the traits of Father Still. All who knew him respected him, and those who knew him well loved him. Two Bishops Right Revs. Ryan and Janssen followed by a long line of surpliced clergy entered the sanctuary and when there commenced the recitation of the Office of the Dead. Upon a raised dais surrounded by a profusion of palms, flowers and burning candles, were catafalqued the remains of the beloved pastor of the parish. Rev. Father Joseph Still, who after a long and painful illness borne with heroic patience and resignation to God's holy will had yielded to the inevitable, dying on the Friday previous thereto Good Friday. Father Still was a plain man, he was an ordinary man to meet, he was a commoner easy to approach and easy to understand. He was plain spoken and outspoken, a man who gained one's respect from the start and held it. It was his frankness that was captivating, his sincerety that was fascinating. He was a power for good, a leader among men and his life was an example to follow. Father Still was undaunted by reverses. When in February, 1891, St. Mary's church was reduced to ashes he came to the rescue with his money, his advice and his hands. While the embers were still smouldering, he was working with hammer, saw and hatchet, helping to erect a temporary structure to keep the congregation together, which answered its purpose while the present beautiful house of worship was being constructed. Out on North Tenth street stand a number of monuments which will perpetuate his memory, St. John's church, school, rectory and St. Vincent's Home. In his passing the congregation lost the pastor who started it in 1880, the man who loved the people of it and the friend of all who lived within it. Hence the universal grief and sorrow on the day of his funeral. Father Still was born in Uerdingen, Germany, May 25, 1849, being scarcely fifty-eight years of age when death summoned him. He made his philosophical and theological studies at the American College of St. Mauritz, Muenster, and was ordained to the priesthood May 22, 1875, for the diocese of Alton. He received the appointment of assistant to Father Bartels of Germantown, which position he held until transferred to Quincy, May 22, 1880. Being told to start there the contemplated new St. John's parish, young Father Still flung himself with great ardor and enthusiasm into the projected work with the remarkable result already mentioned. His last achievement shortly before his death, was the purchase jointly with the St. Francis Parish of that fine tract of land, now Calvary cemetery, on which he was to find his last resting place.