War on Christmas, Part I: X-mas

N.B.: What follows below is a post from the archives, edited slightly and updated: 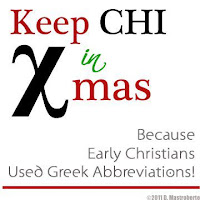 At some point this month you’re bound to hear the complaint that people have introduced the use of “X-mas” in place of “Christmas” as a way to take Christ out of Christmas. Although there may be a few people who use X-mas in this fashion, the origin of its use means quite the opposite.
We find in early Christian art the use of a monogram (called, creatively, the Chi-Rho) for Jesus Christ comprised of the Greek letters chi and rho, the first two letters of the title “Christos” (in Greek, ΧΡΙΣΤΟΣ). It just so happens that the Greek rho resembles the Latin letter “P” and the Greek chi resembles the Latin letter “X”.

After the Emperor Constantine I’s Battle at the Milvian Bridge where he saw this sign, the monogram for Christ, above the sun with the words “In this sign you will conquer,” the use of the monogram became customary. It is found on coins, in Bibles, on tombs and in general works of art.

The early Church historian Eusebius describes the monogram as “the symbol of the Savior's name, two letters indicating the name of Christ by means of its initial characters, the letter P being intersected by X in its center” (Life of Constantine 1.31). The early Christians, then, abbreviated the name of Christ by placing what looks to us as a “P” intersecting an “X” (vellum wasn't cheap and it was cost effective to save space; carving wasn't a simple affair either).

Sometime afterwards it became customary to abbreviate the name of Christ in this way not only in artwork but also in writing (as one who does so on the black, green or white board, too, it is easier, and more fun). This abbreviated monogram worked well enough until the advent of the printing press and, more recently, of the common keyboard found on typewriters and computers. Have you ever found a keyboard that can type a P directly over an X in such a way as to intersect it? Neither have I.

So, the next time somebody tells you that “X-mas” is one of many attacks on Christmas you might fill them in on the truth of the story. Then you might tell them that very name of this most treasured of days comes from the Catholic Church and invite them to join you for the true “Christmas:” Mass in honor of the Nativity of Our Lord Jesus Christ.

Doing so, it seems to me, could be an effective to gain a little ground in the culture war of the day.