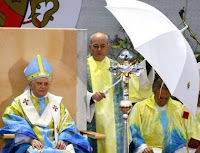 The Lord this morning has given me the grace of awaking at 3:30. I decided then to read a bit from Mother Teresa's Come, Be My Light, which arrived yesterday. I then decided to simply get up and begin work on my three homilies for the day (morning Mass, a wedding, and the anticipated Mass - there's a soccer game and confessions in there, too, somewhere), but not before turning on EWTN just in case I might catchsomething interesting, and something interesting I did indeed catch: Holy Mass in Austria celebrated by His Holiness Benedict XVI.

It is raining thereat the moment and the Austrians must be a more intelligent lot than we Americans: I have seenonly one umbrella (more on that in a bit), but everyone seems to be wearing hooded rain ponchos, which keeps the vision clear for everone and nobody has to worry about losing an eye to someone's carelessness with an umbrella (we've all been there).

chair was very clearly having difficulties with the Pope's white umbrella and the masters of ceremonies had to lend a hand in fixing it; apparently it had been attacked by the wind. They did get if fixed by the end of the Gloria.

What strikes me most at the moment is the vestments; they are hideous. Beneath the clear ponchos worn by the Holy Father and the Bishops are chasubles that are, without doubt, blue, blue with a bit of yellowish green that seems to been poured down from the top. The mitre is blue, but it does have the pilgrim's shell on it; that is a nice touch. The deacon's dalmatic is very yellow. There are no muted colors today.

I'm very anxious to hear the Holy Father's homily and to steal a gem or two for my homily this morning.