Some of my dearest friends in Quincy posted this picture on Facebook yesterday, taken from their dining room (if memory serves), of what they have put up in their home for Lent to serve as a clear and constant reminder: 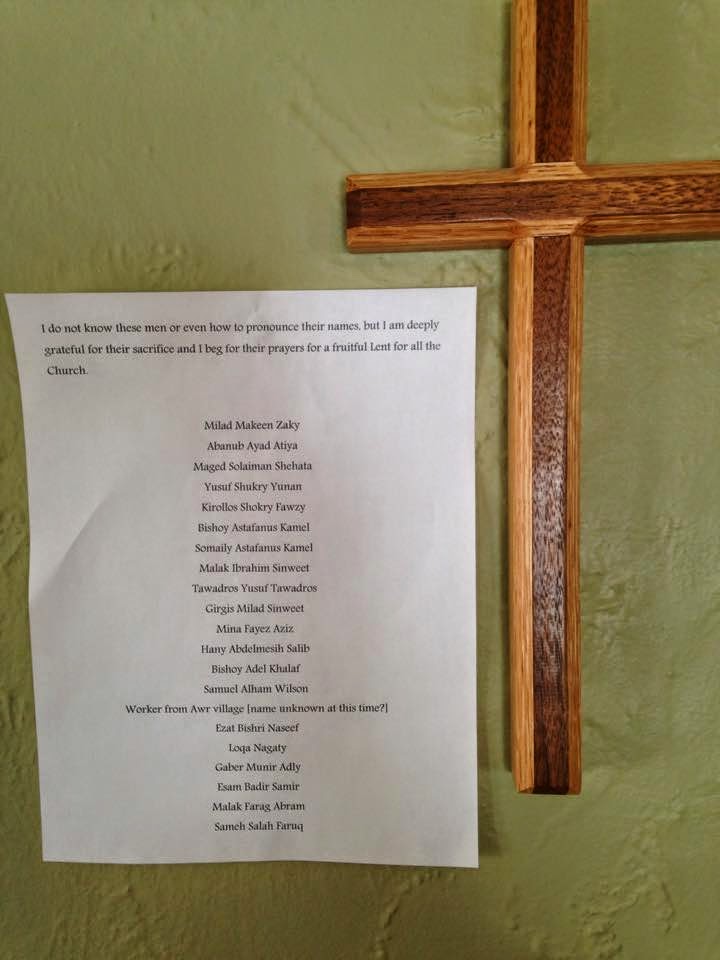 In case you cannot quite make out the words, it reads:

I do not know these men or even how to pronounce their names, but I am deeply grateful for their sacrifice and I beg for their prayers for a fruitful Lent for the Church.

Then follows the list of names of the 21 Copts martyred last weekend by the Islamic State on the shores of Libya:

My friends in Quincy recognize the bond that unites us all in the Body of Christ, that bond received in Baptism that even death cannot break.

Seeing this simple testimony of faith makes me long all the more to be home.

Beshir Kamel, the brother of Bishoy Astafanus Kamel and Somaily Astafanus Kamel who were both martyred, recently expressed his gratitude to the Islamic State, this according to a report from Christianity Today:

Speaking on a live prayer and worship programme on Christian channel SAT-7 ARABIC yesterday, Beshir Kamel said that he was proud of his brothers Bishoy Estafanos Kamel (25) and Samuel Estafanos Kamel (23) because they were "a badge of honour to Christianity".

Harrowing scenes of the murders have been seen around the world. The last words of some of those killed were "Lord Jesus Christ".

Beshir Kamel thanked ISIS for not editing out the men's declaration of belief in Christ because he said this had strengthened his own faith. He added that the families of the ex-patriate workers are "congratulating one another" and not in despair: "We are proud to have this number of people from our village who have become martyrs," he told the programme.

He said: "Since the Roman era, Christians have been martyred and have learned to handle everything that comes our way. This only makes us stronger in our faith because the Bible told us to love our enemies and bless those who curse us."

Melanie Pritchard recently reflected on the witness given by these 21 men and what it might mean for us. She writes,

I go about my daily life in America where I practice my Catholic faith freely and wonder if giving up sugar will just be too much of a sacrifice for Lent, wondering if I can endure it for 40 days. I realized my own weakness as I watched 21 men give their lives in the ultimate sacrifice.

It just puts things into perspective. My friend and speaker Patrick Madrid wrote on his Facebook page last week after this ISIS attack on Christians, “I am thinking of these brothers in Christ as I prepare for my own paltry, insignificant Lenten ‘sacrifices.’ Praised be ‎Jesus‬ Christ, now and forever. Onward Christian Soldiers!”

That about sums up how I feel about my own Lenten sacrifices, which seem more like inconveniences than real sacrifices.