The tomb, and the cloth that covered His face

Ever since I first became aware of the Veil of Manoppello, I have wanted to do nothing more than to look inside the tomb of the Lord Jesus. It was this passage from Paul Badde's excellent and intriguing book, The True Icon: From the Shroud of Turin to the Veil of Manoppello (San Francisco: Ignatius Press, 2012) that first instilled such a longing within me:


After mentioning "the linen cloths" twice, John speaks once again specifically about the "napkin, which had been on Jesus' head" [Jn 20:5-7]. He describes its location with puzzling precision: the fact that it was "not lying with the linen cloths but rolled up in a place by itself". This soudarion was lying lying there by itself, separate from the other cloths. John attaches great importance thereto in this extremely concise text. If that was the case, however, it must have been lying on the ground. Otherwise there was no "place by itself" apart from the stone bench on the right side of the narrow passageway. Indeed, directly behind the bench, the bedrock wall projects straight upward. The bench is not a bed where something can disappear into a nook or cranny. The design of this particular sepulcher simply allows no other place "by itself" or "alongside"; its clear structure translates the position of the little cloth unambiguously from the text into reality. In this room, "not lying with the linen cloths" could only mean on the floor of the chamber, at the feet of the apostle Peter (89-90).


Over the last year or so, I have made the little pilgrimage from Rome to Manoppello to look upon the Holy Face three separate times.

Each time I did so, my longing to look inside the tomb and to see for myself where this mysterious little cloth came from increased all the more. This was, in fact, the primary goal - simply to look within the tomb - behind my recent pilgrimage to the Holy Land with Steve Ray; I wanted to see with my own eyes and so better to understand what happened that first Easter morning inside the tomb of Christ Jesus.

In piecing together the story of what he calls the "missing link of Easter night," Badde asks a couple of very insightful questions. When Peter finds the tomb empty,


Why did he not run out immediately to John and then with him to the Roman prefect? Why did he not exclaim also, "They have taken the Lord!" Why did not dash off to the other apostles to consult with them about what they should do now, or to the Sanhedrin to shout, "You can't do that: first you kill our Master, and then you secretly get rid of him! He is still a Jew like you. Did he not at least have the right to rest in peace with the dead? What other outrage do you plan to commit?" Why, then, did he not run with John to Joseph of Arimathea and Nicodemus, who had laid Jesus in the tomb and rolled the great stone in front of it? Why not? Why does the narrative now completely change course from Mary Magdalene and her realization, "They have the Lord out of the tomb, and we do not know where they have laid him?" Peter, after all, was not more intelligent, wiser or more prophetic than Mary Magdalene. Jesus could only have been carried off; what else? Maybe by Romans, maybe by robbers, by whomever: yet he was gone. No longer there. Simply gone. That is how the women had seen it, and so Peter saw and felt it now - with just one difference (91).


For now Peter had suddenly glimpsed something else in the shadowy darkness on the floor. At his feet the light was caught in something distinct, as the wind is caught in a shrub. Like a flicker from the burning bush. It shimmered golden, bronze. If it had been lying on the bench with the other cloths, the first rays of dawn would not have been able to lay hold of it; Peter would not have been able to see it or to feel it with his fingers, because it was so extremely fine. Only on the floor could it have been in by the light. No light at all fell on the bench - impossible. Because of the low entrance, the light could only fall on the floor. On the bench with the cloths, everything remained in the shadows. Only on the floor could Peter see something, and what he now saw there was delicate as woven breath and so fine that Peter would not have seen it either, had it been lying on the ground. Yet it was wrapped, tied, rolled, crumpled or folded up. The Greek verb entylisso that John uses can mean all these things.Thus, the expression makes just one thing clear: it was not lying there flat. It was a haze, but it must have been recognizable somehow as a "thing", as an "object" that caught the first rays of dawn. Naturally, Peter bent down and picked it up. It was the precious little cloth that had lain on Jesus' face, the finest sea silk. It was as light as an angel's feather as Peter picked it up, unfolded it and held it against the light of the entrance. What else? He must have held it that way, not toward the interior of the dark chamber, but up to the light. It was, however, a cloth of light. It reacts to light. 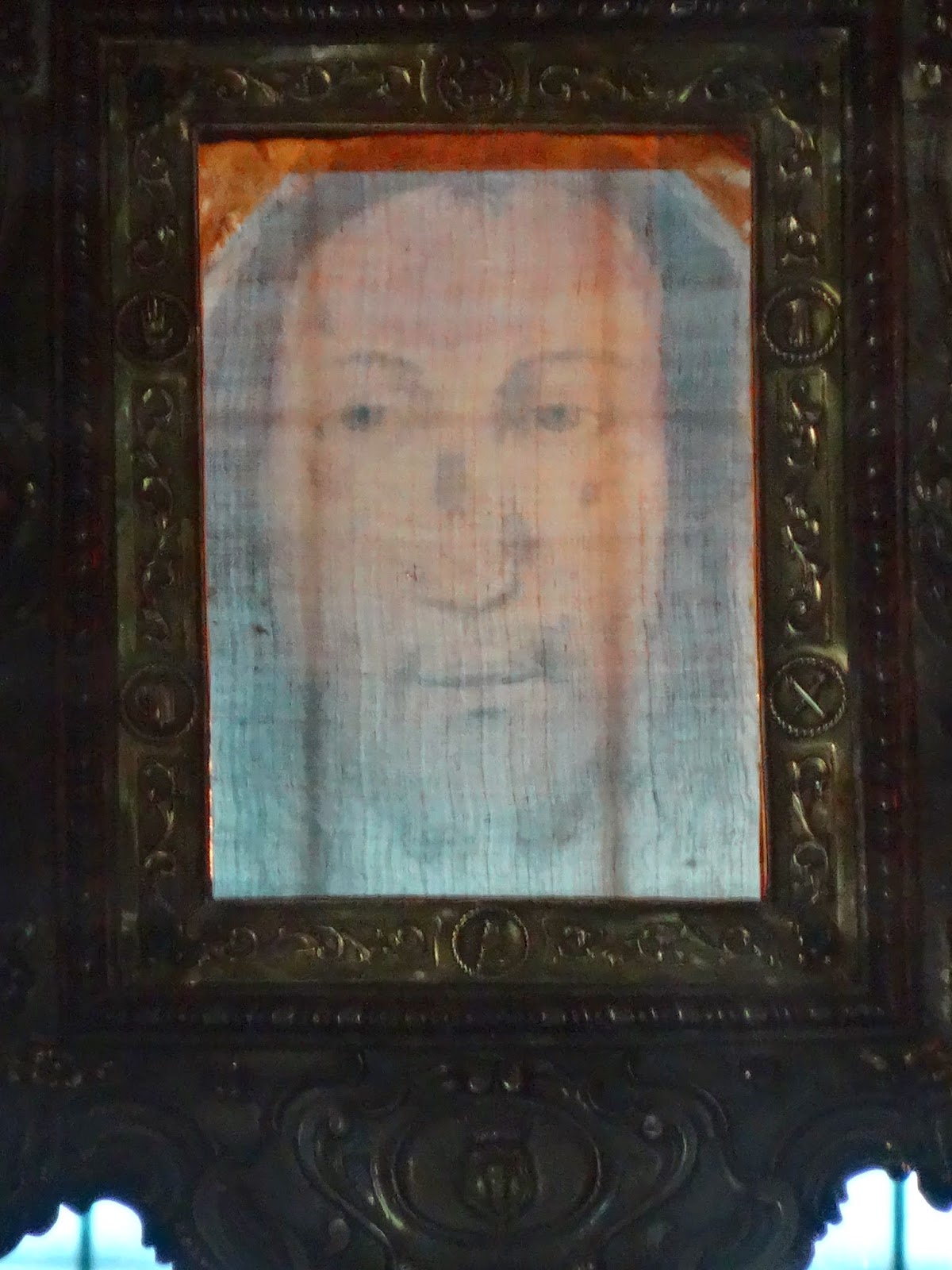 What Peter saw now in that tomb on the veil against the morning light made it in a blink of the eye as clear as the sun: no one had taken the Lord from the tomb. Jesus had not been stolen and carried away. Something completely new was in the world now. It was unheard of, what Peter glimpsed in the blue hours of the first Easter morning here, on that transparent fabric held against the light of the entrance. Here suddenly Christ was looking at him! With open eyes! No man had ever seen this before. This cloth was "not made by human hands", as was said later. It was the true image. Three days earlier Peter had said that he did not know that man. Hours later he had had to watch from a distance and hear how Jesus, streaming with blood, cried out again on the cross and died. Peter was still reeling from the shock - when now suddenly Christ himself looked out at him from the veil in his hand. Now he knew him. Now he recognized him immediately. "In thy light we see light," Israel had read for centuries in the Book of Psalms [Ps. 36:9]. Did that verse occur to him? Or did he already remember then the earlier intimations of Jesus that "the Son of man must ... be killed, and on the third day be raised" [Lk 9:22]? We do not know. Only one thing do we know. Besides the bewildering emptiness of the linens in the tomb, this message in pictures read, "I live." Jesus was no longer dead. The only thing corresponding to this image was not another image, no icon or other sort of portrait; the only thing corresponding to what he saw was the living man (91, 93).

As I said, all I dared ask of the Lord was simply the grace to look inside the tomb. In his great kindness, he gave something more: the grace to offer the Holy Mass within his very tomb. For thirty-five minutes I stood within the tomb. All through the Mass my mind returned again and again to the Veil of Manoppello and to that first Easter morning. Having seen both the Veil of Manoppello and having stood within the tomb, I can say that what Badde describes must be true; there simply is no other explanation for the cloth that bears the living face of the Lord Jesus.
Posted by Rev. Daren J. Zehnle, J.C.L., K.C.H.S. at 2:40 AM