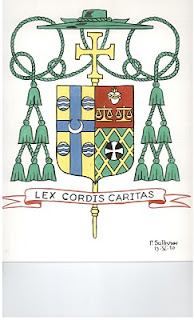 Blazon
Arms impaled. Dexter: Or a cross throughout Azure; within the quarters four fountains, Proper, and at the center of the cross a crescent Argent. Sinister: Vert upon a Lattice Or an ogress charged with a cross patee throughout Argent; upon a chief Gules two pan-balances of the second below a heart of the third, encircled by thorns and enflamed of the second.
Significance
The episcopal heraldic achievement, or bishop’s coat of arms, is composed of a shield, which is the central and most important part of the design, a scroll with a motto and the external ornamentation. The design is described (blazoned) as if the description was being given by the bearer (from behind) with the shield being worn on the left arms. Thus, it must be remembered, where it applies, as the device is viewed from the front that the terms sinister and dexter are reversed.

By heraldic tradition, the arms of the bishop of a diocese, called an “Ordinary,” are joined (impaled) with the arms of his jurisdiction, in this case the Diocese of Springfeld in Illinois, that are seen in the dexter impalement (left side) of the design.

These arms are composed of a gold (yellow) field on which is displayed a blue cross of The Faith. Within each quarter that is formed by the cross is a roundel of alternating blue and silver (white) wavy bars. Each of these roundels is known heraldically as a “fountain” and it is used to represent a small body of water, such as a pond or a spring. So, canting (playing on) the name of the See City, the background of the diocesan arms is a “feld of springs;” thus, Springfeld. At the center of the cross is a silver (white) crescent, to represent the moon, a classic symbolism for our Blessed Mother, in her title of the Immaculate Conception, titular of the Cathedral-church in Springfeld, for as it is described in the Book of Revelation (Rev. 12:1), our Holy Mother has the “moon at her feet and upon her head a crown of twelve stars.”

For his personal arms, His Excellency, Bishop Paprocki continues to use the personal design that was adopted at the time of His Excellency’s selection to receive the fullness of Christ’s most holy Priesthood, as he was ordained as an Auxiliary Bishop for the Archdiocese of Chicago.

On a green field is seen a golden (yellow) lattice, a device in which many individual slats form a single, integrated device of strength, far greater than all of its components. By the use of this device, Bishop Paprocki expresses that all aspects of Christian life, theology, church law and civil law, social involvements, form a framework of the total Christian. On the lattice is displayed an ogress (a black circular device) on which is displayed a silver (white) cross patée. The cross, which thanks to the research and knowledge of the Reverend Mister Edmund Gronkiewicz (a Permanent Deacon of the Archdiocese o Chicago) has been determined to be the “clan symbol” of the Paprocki’s family in Poland and by its use His Excellency acknowledges, with great love and devotion, the heritage that has come to him from his parents, John and Veronica (Bonat) Paprocki.

The upper portion of the design, known as a “chief,” is red and contains a Sacred Heart, in silver and gold. The Sacred Heart is placed above two pan-balances, the symbol of justice and law, emblematic of the fact that Bishop Paprocki is both a civil and a church (canon) lawyer.

For his motto Bishop Paprocki has retained the Latin motto “LEX CORDIS CARITAS.” This phrase, which is based on the texts from the Prophet Jeremiah (Jer. 31:33), Saint Paul’s Epistle to the Romans (Rom. 13:10) and the Second Vatican Council’s Dogmatic Constitution on Te Church (Lumen Gentium (LG-#9)), expresses Bishop Paprocki’s profound belief, as both a civil and a canon lawyer, that, truly, “the law of the heart is love.”

The achievement is completed by the external ornamentation which are a gold processional cross, that is placed in back of the shield and which extends above and below the shield, and the pontifcal hat, called a “gallero,” with its six tassels in three rows on either side of the shield, all in green. These are the heraldic insignia of a prelate of the rank of bishop, by instruction of The Holy See, of March 31, 1969.
Posted by Rev. Daren J. Zehnle, J.C.L., K.C.H.S. at 10:36 AM