Some months back I bought some fabric that I intended to have made into a Marian chasuble. When I finally took it to The House of Hansen a few weeks ago, it occurred to me that I ought to have some of it used on a dalmatic, as well.
The salesman wasn't sure if I had enough material for both a chasuble and a dalmatic so he called out one of her seamstresses.
She measured the fabric many times and played around with a few ideas, bouncing them off of the salesman and me. In the end, I wasn't quite sure what she had in mind, but she was confident she could pull it off.
The salesman called on Friday to tell me the vestments had been finished and the gold galloon I had selected helped make them beautiful. Naturally, I was pleased to hear and was told the vestments would be shipped Monday. They arrived today.
What do you think? 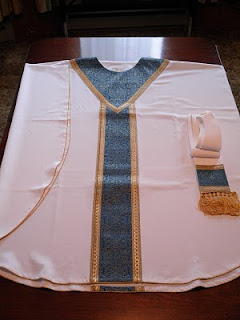 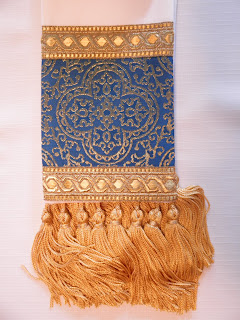 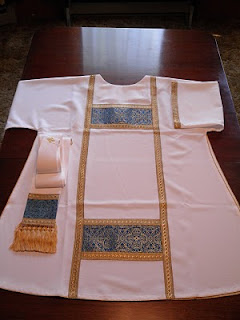 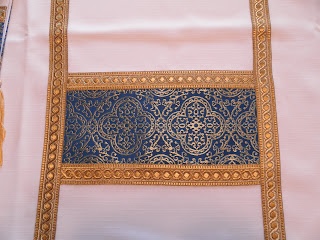 Now I almost wish I had a Saturday morning Mass so I could use them soon.

Email ThisBlogThis!Share to TwitterShare to FacebookShare to Pinterest
Labels: The House of Hansen, Vestments