During his pastoral visit to the island of Cyprus, Pope Benedict XVI celebrated Mass in the church of the Holy Cross and preached a beautiful homily on the cross that everyone should read, the text of which follows, with my emphases:

Dear brothers and sisters in Christ,

The Son of Man must be lifted up, so that whoever believes in him may have eternal life (cf. Jn 3:14-15). In this Votive Mass we adore and praise our Lord Jesus Christ, because by his Holy Cross he has redeemed the world. Through his death and resurrection he has thrown open the gates of heaven and he has prepared a place for us, so that we, his followers, may be granted a share in his glory.

In the joy of Christ’s saving victory, I greet all of you gathered here in Holy Cross Church and I thank you for your presence. I greatly appreciate the warmth of the reception you have given me. I am particularly grateful to His Beatitude the Latin Patriarch of Jerusalem for his words of welcome at the beginning of Mass and for the presence of the Father Custos of the Holy Land. Here in Cyprus, a land that was the first port of call on Saint Paul’s missionary journeys across the Mediterranean, I come among you today, following in the great Apostle’s footsteps, to strengthen you in your Christian faith and to preach the Gospel that offers life and hope to the world.

The focus of our celebration today is the Cross of Christ. Many might be tempted to ask why we Christians celebrate an instrument of torture, a sign of suffering, defeat and failure. It is true that the Cross expresses all these things. And yet, because of him who was lifted up on the Cross for our salvation, it also represents the definitive triumph of God’s love over all the evil in the world. 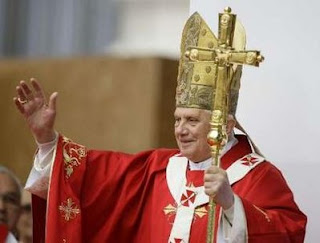 There is an ancient tradition that the wood of the Cross was taken from a tree planted by Adam’s son Seth over the place where Adam was buried. On that very spot, known as Golgotha, the place of the skull, Seth planted a seed from the tree of the knowledge of good and evil, the tree in the midst of the Garden of Eden. Through God’s providence, the work of the Evil One would be undone by turning his own weapons against him.

Beguiled by the serpent, Adam had foresaken his filial trust in God and sinned by biting into the fruit of the one tree in the garden that was forbidden to him. In consequence of that sin, suffering and death came into the world. The tragic effects of sin, suffering and death were all too evident in the history of Adam’s descendants. We see this in our first reading today, with its echoes of the Fall and its prefiguring of Christ’s redemption.

As a punishment for their sin, the people of Israel, languishing in the desert, were bitten by serpents and could only be saved from death by looking upon the emblem that Moses raised up, foreshadowing the Cross that would put an end to sin and death once and for all. We see clearly that man cannot save himself from the consequences of his sin. He cannot save himself from death. Only God can release him from his moral and physical enslavement. And because he loved the world so much, he sent his only-begotten Son, not to condemn the world – as justice seemed to demand – but so that through him the world might be saved. God’s only-begotten Son had to be lifted up just as Moses lifted up the serpent in the desert, so that all who looked upon him with faith might have life.

The wood of the Cross became the vehicle for our redemption, just as the tree from which it was fashioned had occasioned the Fall of our first parents. Suffering and death, which had been a consequence of sin, were to become the very means by which sin was vanquished. The innocent Lamb was slain on the altar of the Cross, and yet from the immolation of the victim new life burst forth: the power of evil was destroyed by the power of self-sacrificing love.

The Cross, then, is something far greater and more mysterious than it at first appears. It is indeed an instrument of torture, suffering and defeat, but at the same time it expresses the complete transformation, the definitive reversal of these evils: that is what makes it the most eloquent symbol of hope that the world has ever seen. It speaks to all who suffer – the oppressed, the sick, the poor, the outcast, the victims of violence – and it offers them hope that God can transform their suffering into joy, their isolation into communion, their death into life. It offers unlimited hope to our fallen world.

That is why the world needs the Cross. The Cross is not just a private symbol of devotion, it is not just a badge of membership of a certain group within society, and in its deepest meaning it has nothing to do with the imposition of a creed or a philosophy by force. It speaks of hope, it speaks of love, it speaks of the victory of non-violence over oppression, it speaks of God raising up the lowly, empowering the weak, conquering division, and overcoming hatred with love. A world without the Cross would be a world without hope, a world in which torture and brutality would go unchecked, the weak would be exploited and greed would have the final word. Man’s inhumanity to man would be manifested in ever more horrific ways, and there would be no end to the vicious cycle of violence. Only the Cross puts an end to it. While no earthly power can save us from the consequences of our sins, and no earthly power can defeat injustice at its source, nevertheless the saving intervention of our loving God has transformed the reality of sin and death into its opposite. That is what we celebrate when we glory in the Cross of our Redeemer. Rightly does Saint Andrew of Crete describe the Cross as “more noble, more precious than anything on earth […] for in it and through it and for it all the riches of our salvation were stored away and restored to us” (Oratio X; PG 97, 1018-1019).

Dear brother priests, dear religious, dear catechists, the message of the Cross has been entrusted to us, so that we can offer hope to the world. When we proclaim Christ crucified we are proclaiming not ourselves, but him. We are not offering our own wisdom to the world, nor are we claiming any merit of our own, but we are acting as channels for his wisdom, his love, his saving merits. We know that we are merely earthenware vessels, and yet, astonishingly, we have been chosen to be heralds of the saving truth that the world needs to hear. Let us never cease to marvel at the extraordinary grace that has been given to us, let us never cease to acknowledge our unworthiness, but at the same time let us always strive to become less unworthy of our noble calling, lest through our faults and failings we weaken the credibility of our witness.

In this Year for Priests, let me address a special word to the priests present today, and to those who are preparing for ordination. Reflect on the words spoken to a newly ordained priest as the Bishop presents him with the chalice and paten: “Understand what you do, imitate what you celebrate, and conform your life to the mystery of the Lord’s Cross”. As we proclaim the Cross of Christ, let us always strive to imitate the selfless love of the one who offered himself for us on the altar of the Cross, the one who is both priest and victim, the one in whose person we speak and act when we exercise the ministry that we have received. As we reflect on our shortcomings, individually and collectively, let us humbly acknowledge that we have merited the punishment that he, the innocent Lamb, suffered on our behalf. And if, in accordance with what we have deserved, we should have some share in Christ’s sufferings, let us rejoice because we will enjoy a much greater gladness when his glory is revealed.

In my thoughts and prayers I am especially mindful of the many priests and religious in the Middle East who are currently experiencing a particular call to conform their lives to the mystery of the Lord’s Cross. Through the difficulties facing their communities as a result of the conflicts and tensions of the region, many families are taking the decision to move away, and it can be tempting for their pastors to do likewise. In situations of this kind, though, a priest, a religious community, a parish that remains steadfast and continues to bear witness to Christ is an extraordinary sign of hope, not only for the Christians but for all who live in the region. Their presence alone is an eloquent expression of the Gospel of peace, the determination of the Good Shepherd to care for all the sheep, the Church’s unyielding commitment to dialogue, reconciliation and loving acceptance of the other. By embracing the Cross that is held out to them, the priests and religious of the Middle East can truly radiate the hope that lies at the heart of the mystery we are celebrating in our liturgy today.

Let us all take heart from the words of our second reading today, which speak so beautifully of the triumph that was in store for Christ after his death on the Cross, a triumph in which we are invited to share. “For God raised him high and bestowed on him the name which is above every name, that at the name of Jesus every knee should bow in heaven and on earth and under the earth” (Phil 2:9-10).

[1] Yes, beloved brothers and sisters in Christ, far be it from us to glory except in the cross of our Lord Jesus Christ (cf. Gal. 6:14). He is our life, our salvation and our resurrection; through him we are saved and set free.