Religion vs. the Gospel?

One sees all manner of memes on the various social media, from the humorous to the lame to the ignorant. This morning I saw a meme that would fall under the category of the latter: 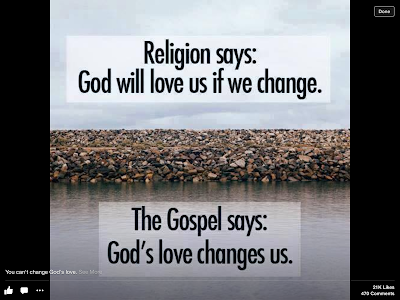 Shall we count the errors of this meme?
Christ Jesus did not come to do away with religion, for religion is the means by which man is bound to God. God gave a religion to the Israelites, a religion that Jesus has not done away with but fulfilled. Furthermore, he told the Apostles at the Last Supper in the Gospel of Luke to "do this in remembrance of me" (Luke 22:19); he entrusted a religious ceremony to them, thereby giving to them a religion.

The "fundamentalist" claims and sentiments expressed in this meme and those like it are popular, probably because they are simplistic. It is not, however, a question of either/or, but of both/and.
Posted by Rev. Daren J. Zehnle, J.C.L., K.C.H.S. at 10:51 AM

Email ThisBlogThis!Share to TwitterShare to FacebookShare to Pinterest
Labels: Religion versus Spirituality