The wounds and eyes of Manoppello

The more I gaze upon the Holy Face of Our Lord Jesus Christ which he has left us in the veil now housed and venerated at Manoppello, the more grateful I am for this most priceless treasure of the Church.

It is truly impossible to describe the wonders hidden within this piece of sea silk, this piece of byssus, both in words and in pictures. Words and photographs can hint at the experience of gazing into those eyes so filled with love and mercy, but they cannot do justice to the encounter with the Holy Face.

Yesterday I return to the Shrine of the Holy Face with three companions, a priest of the Diocese of Orange, a priest of the Anglican Ordinariate in Australia, and a former ambassador of Australia to Russia and a host of other countries (it's a curious life I lead, to be sure, and the Lord continually blesses me by bringing very interesting people into my life). It was my fourth pilgrimage to Manoppello and the first for each of my fellow pilgrims.

As I sat on the floor before the Holy Face - it's often helpful to be like a child in the presence of God - I noticed in a way more particular than in my three previous visits, the wounds he received upon his face. Consider, as a simple and insufficient example, this photograph I took yesterday of the Holy Face: 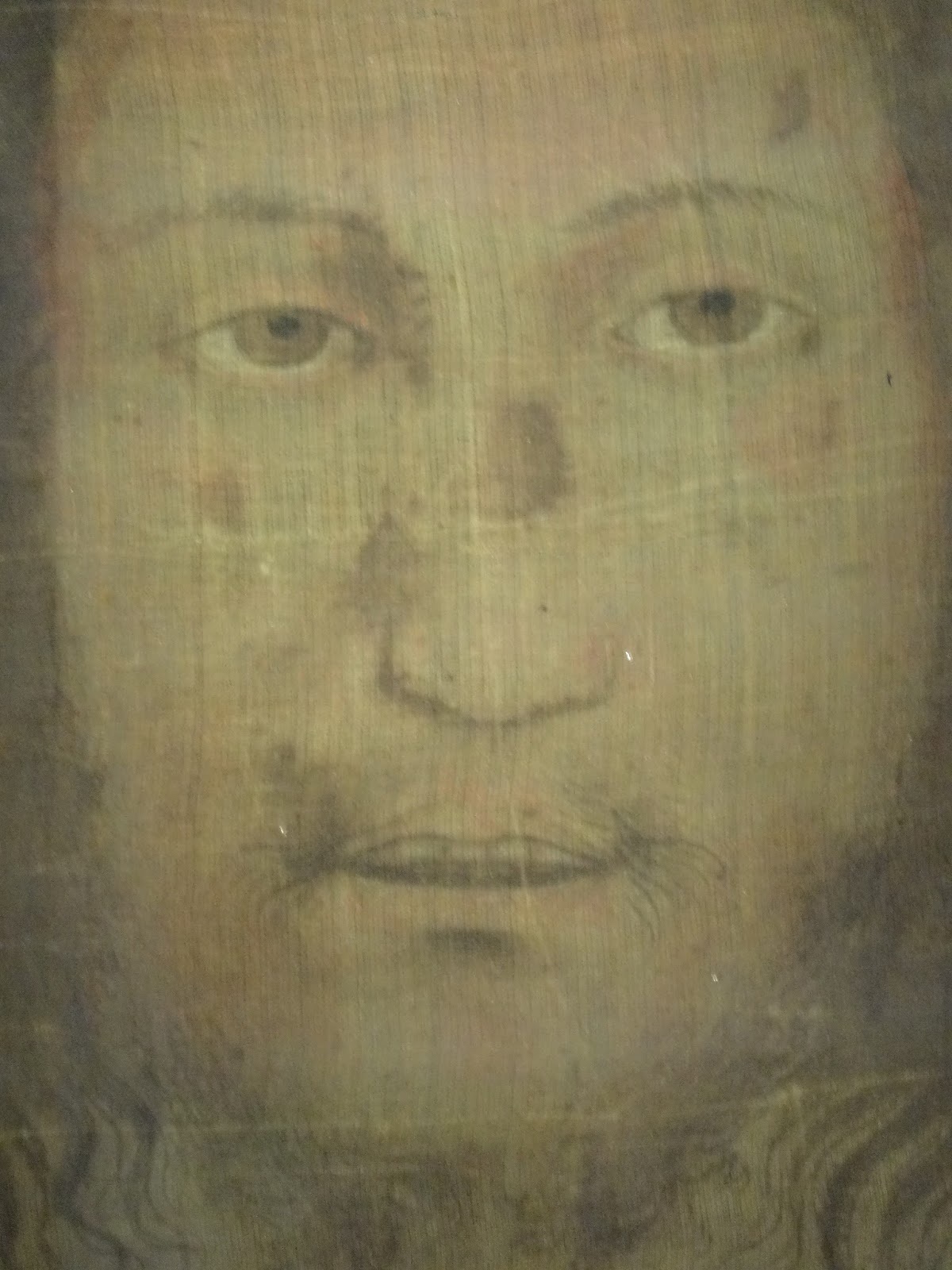 You can clearly see the wounds near his left temple, 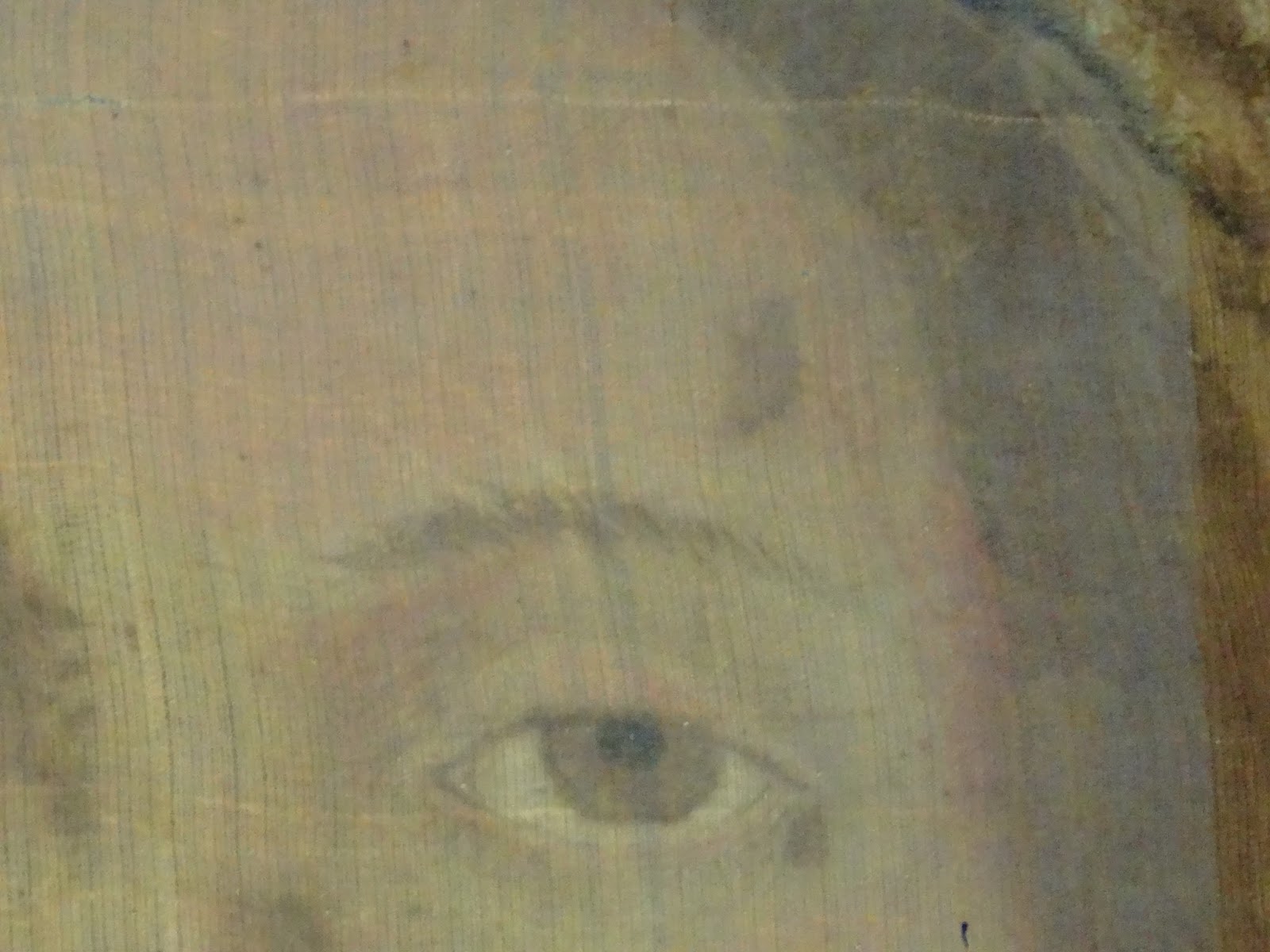 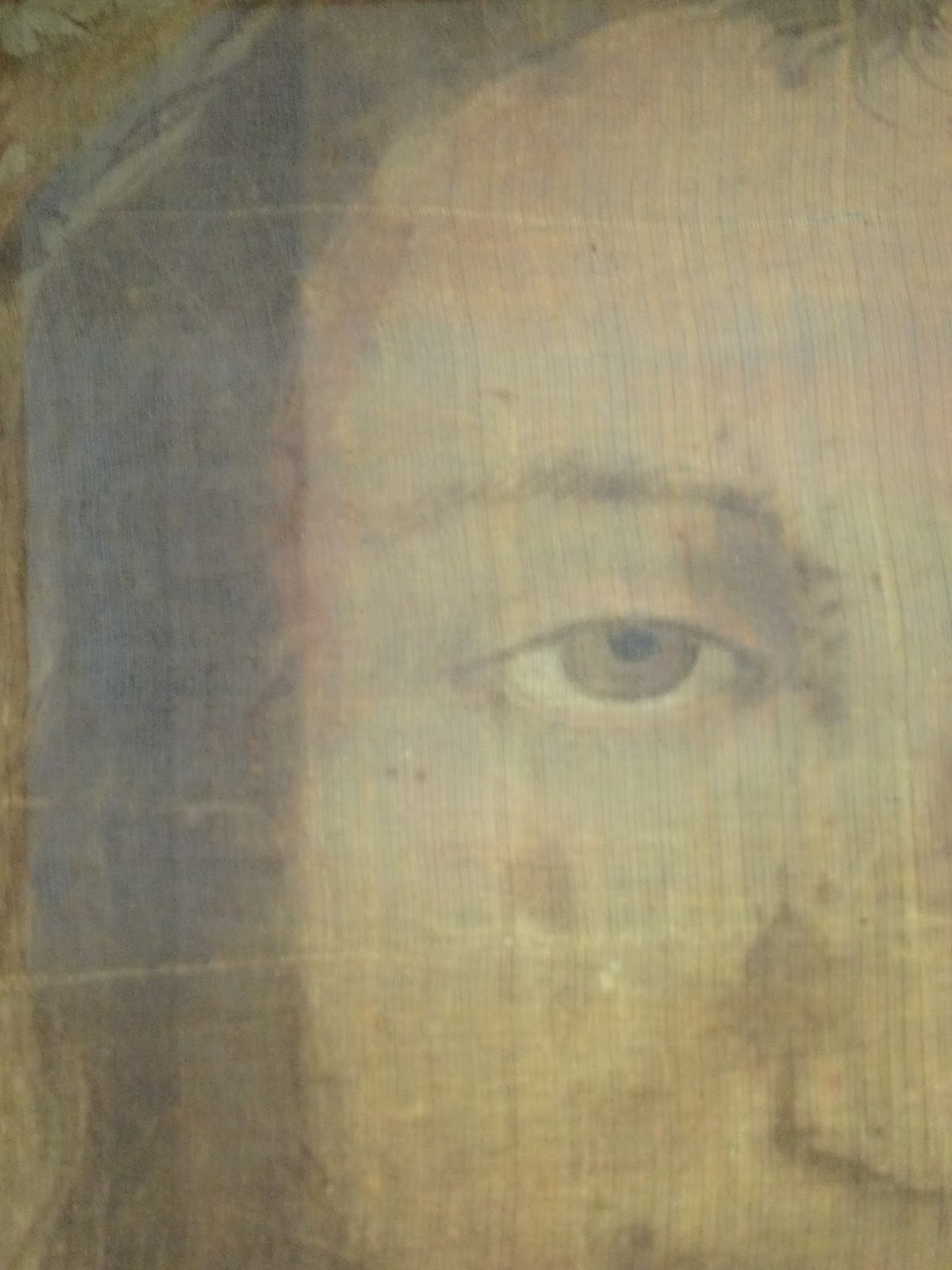 on the left side of his nose where it appears to have been broken, and just to the right of his upper lip. 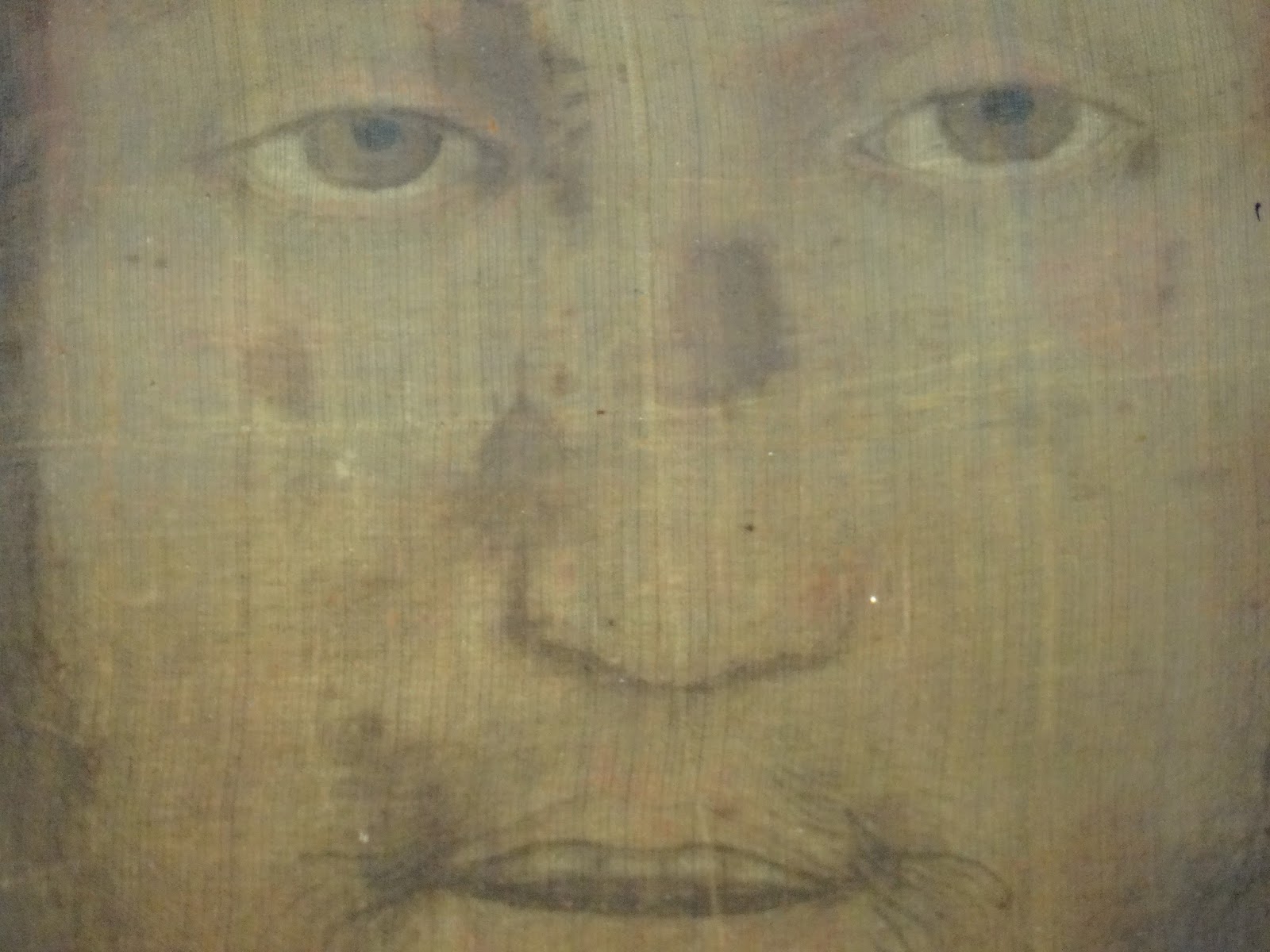 Here were have confirmed for us the accounts of the Evangelists wherein we are told that "they spat in his face and struck him" when he stood before the Sanhedrin (Matthew 26:67). Again "they spat upon him and took the reed and kept striking him on the head" after his trial before Pontius Pilate (Matthew 27:30; see also Mark 15:19). Rightly, then, did Isaiah prophesy of him, "I gave my back to those who beat me, my cheeks to those who tore out my beard; my face I did not hide from insults and spitting" (Isaiah 50:6). 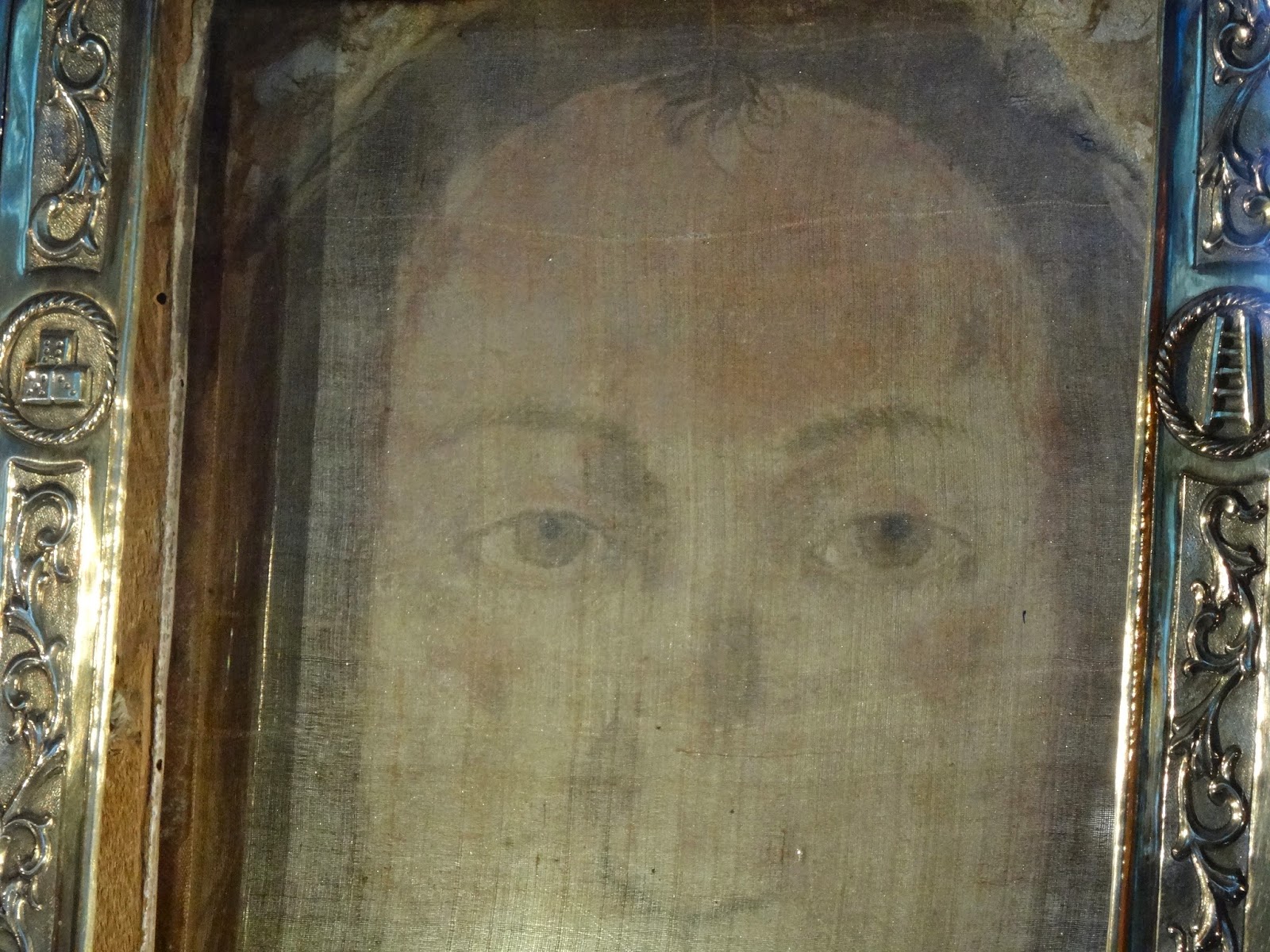 The same wounds are certainly visible in this earlier photograph, but they are not nearly as pronounced. In these two photographs you can appreciate - at least in part - what I mean when I say that the face changes as you look upon it, as the light plays upon it, and as your angle shifts.

I found my eyes drawn back and forth between his wounds - the physical marks of his great love for us - and his eyes, in which his love is still clearly seen and which look out with a love stronger than death (cf. Song of Songs 8:6).

In his wounds I could understand Isaiah's words, that "he had no majestic bearing to catch our eye, no beauty to draw us to him. He was spurned and avoided by men, a man of suffering, knowing pain, like one from whom you turn your face" (Isaiah 53:2-3). But in his eyes I could see that "his face shone like the sun" (Matthew 17:2). I could not turn my face away away from the beauty of his face; I could not turn away from the most beautiful face I have ever seen (cf. Psalm 27:4).

As I looked back and forth between his eyes and his wounds, I said to myself, "He smiled at me!" At first, I thought my mind was playing tricks on me, until I look at his mouth. To be sure, he did not smile at me with a big, toothy grin, but he nevertheless smiled at me, subtly but clearly. His smile filled my heart with a deep peace and my eyes with happy tears. Had there not been a large - and noisy - group of Italian pilgrims, I would have wept, for "not all tears are evil" (J.R.R. Tolkien).

Later in the day, I mentioned in passing to one of my companions that I was certain the Holy Face smiled at me. He mentioned that he, too, saw him smile from the nave of the shrine (I was behind the sanctuary, in the apse).

Please, if you come to Italy, you must make a visit to Manoppello to look for yourself upon the Holy Face.

From Manoppello we made our way to Chieti, where we stopped for lunch at a local trattoria and partook of homemade food at unbelievable prices (I had a fantastic home made ravioli). We explored Chieti a bit after lunch and then made our way to Pescara, a city on the Adriatic Sea because we wanted to smell the ocean and listen to the waves.
Posted by Rev. Daren J. Zehnle, J.C.L., K.C.H.S. at 11:33 AM