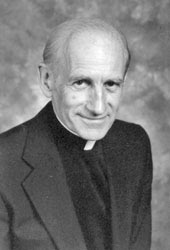 Just a few months after celebrating the sixtieth anniversary of his ordination as a priest of Jesus Christ, the Reverend August J. Sperl, retired priest of the Diocese of Springfield in Illinois, died late last night at the age of 94.

When I was assigned pastor of Sacred Heart Parish in Virden and of St. Patrick Parish in Girard in September of 2009, I had the honor of succeeding Father Sperl, who had served the faithful of Virden for some twenty-six years (and the faithful of Girard for about one year). At the time, the youngest priest in the Diocese was succeeding the oldest active priest in the Diocese, and he could not have been more gracious about the transition.

Two things he said at this time particularly stand out in my mind.

The first, he said to me as he walked and talked me through the ins and outs of Sacred Parish Parish before my assignment took effect. After sharing the history of the parish and of his time there with me, he explained how he had handled the day-to-day affairs of the parish. At each step along the way, he said to me, "But you're in charge now and will have to do things as you think best." I have no idea how many times he repeated this sentence, but it stands out to me as a clear sign of humility.

The second, he said the parishioners of Sacred Heart Parish at the last Mass he celebrated as the pastor. In reference to me, he said to his sons and daughters in Christ, "I hope you will treat him as well as you have treated me." I am happy to say that they did, and I am still in contact with many of these parishioners.

Please join me in praying that this august servant of the Lord may now behold the Holy Face of Jesus Christ.