As I was preparing to begin the day this morning I heard a quick downpour of rain outside my window. This wasn't unexpected as the forecast for the week called for rain nearly all day every day. Still, there was something intense about this sudden burst of rain (that lasted all of three minutes) that I said to myself, "And the rain, rain, rain came down, down, down."

I thought the words belonged to a song and since I couldn't remember what song it might be, I went searching the Internet. What I found brought back happy memories of childhood:


I shared it on Facebook and said, "It may not be this bad in Rome today, but you get the idea." Apparently I was wrong. Maybe.

It hasn't rained much in my part of the city today but because of an expected 12 cm (4 3/4") of rain and strong winds tonight, the city of Rome is under a Code Red and schools tomorrow are closed. This is apparently a situatione sensa precedenti, a situation without precedent. Curiously, no one seems to know what a Code Red means.

There's very little wind where I am now and no rain, though we've heard a bit of thunder and seen a little lightning.

Having recently survived Hurricane Iselle and having watched Hurricane Julio blow by, I'm not in the least concerned. I find this situation rather humorous, especially since the weather isn't even anything like a good Midwestern storm. This seems one great over-reaction to a possible storm (it was supposed to pour down rain all day today but didn't, though, to be fair, Rome has terrible drainage), but this is Italy.

Since all schools in Rome are closed today for fear of the coming rain, I decided to take a little walk this morning breakfast (it wasn't - and isn't  now - raining in my part of the city).

I had planned to walk to the Basilica of St. Peter and back (right about 30 minutes each way), but when I arrived at the Pantheons about 6:30 a.m. (after about 10 minutes of walking), I decided not to go as far as planned. The clouds appeared low, dark, and thick in the direction of the Vatican hill and a few sprinkles where falling in the piazza in front of the ancient temple, which, since A.D. 609 is dedicated to St. Mary and the Martyrs (the holy Mass is celebrated there each day, though the Eucharist is not reserved there because of the hordes of tourists): 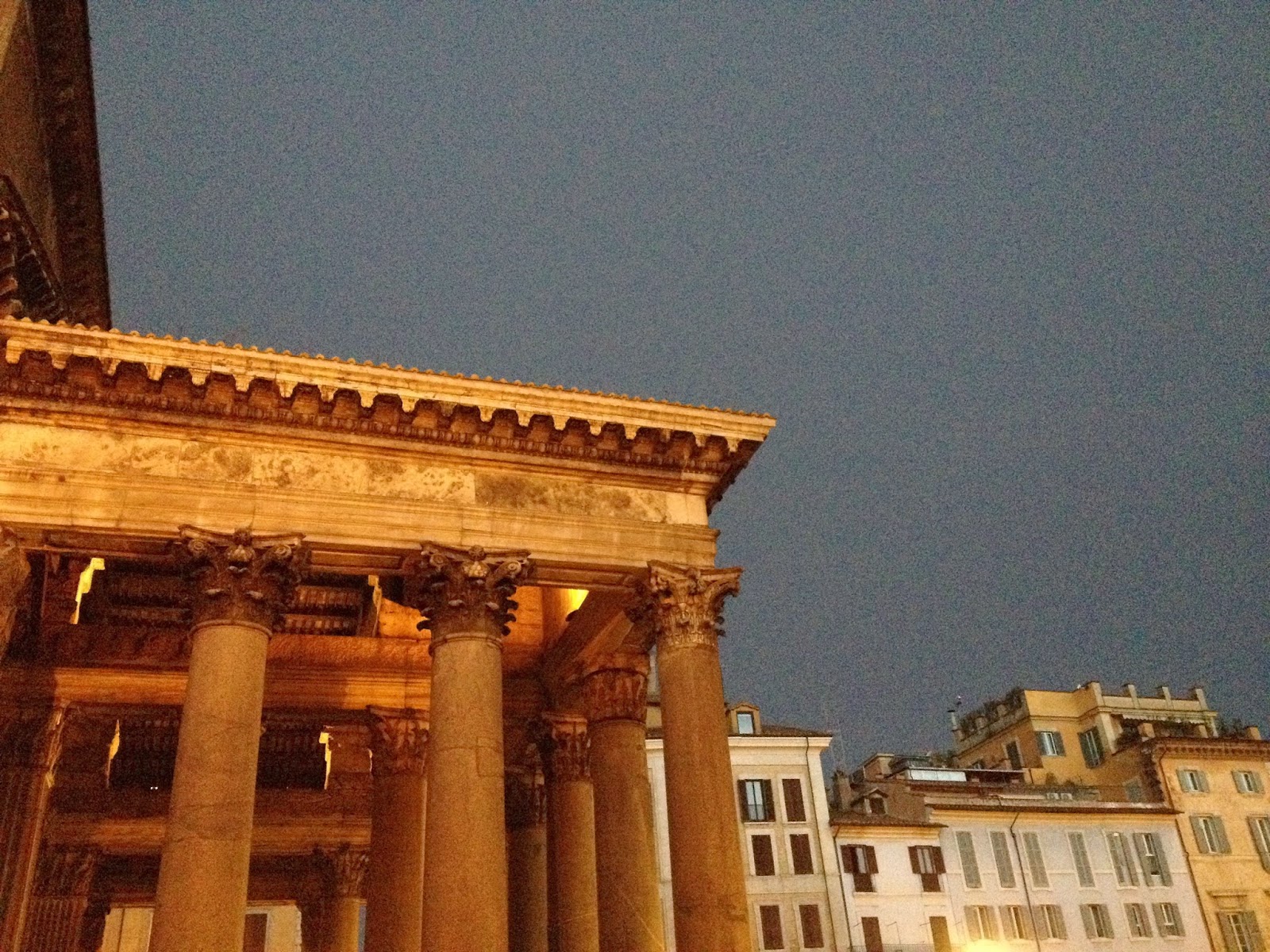 But, as is often the case with things in Italy, in the opposite direction the weather looked quite different: 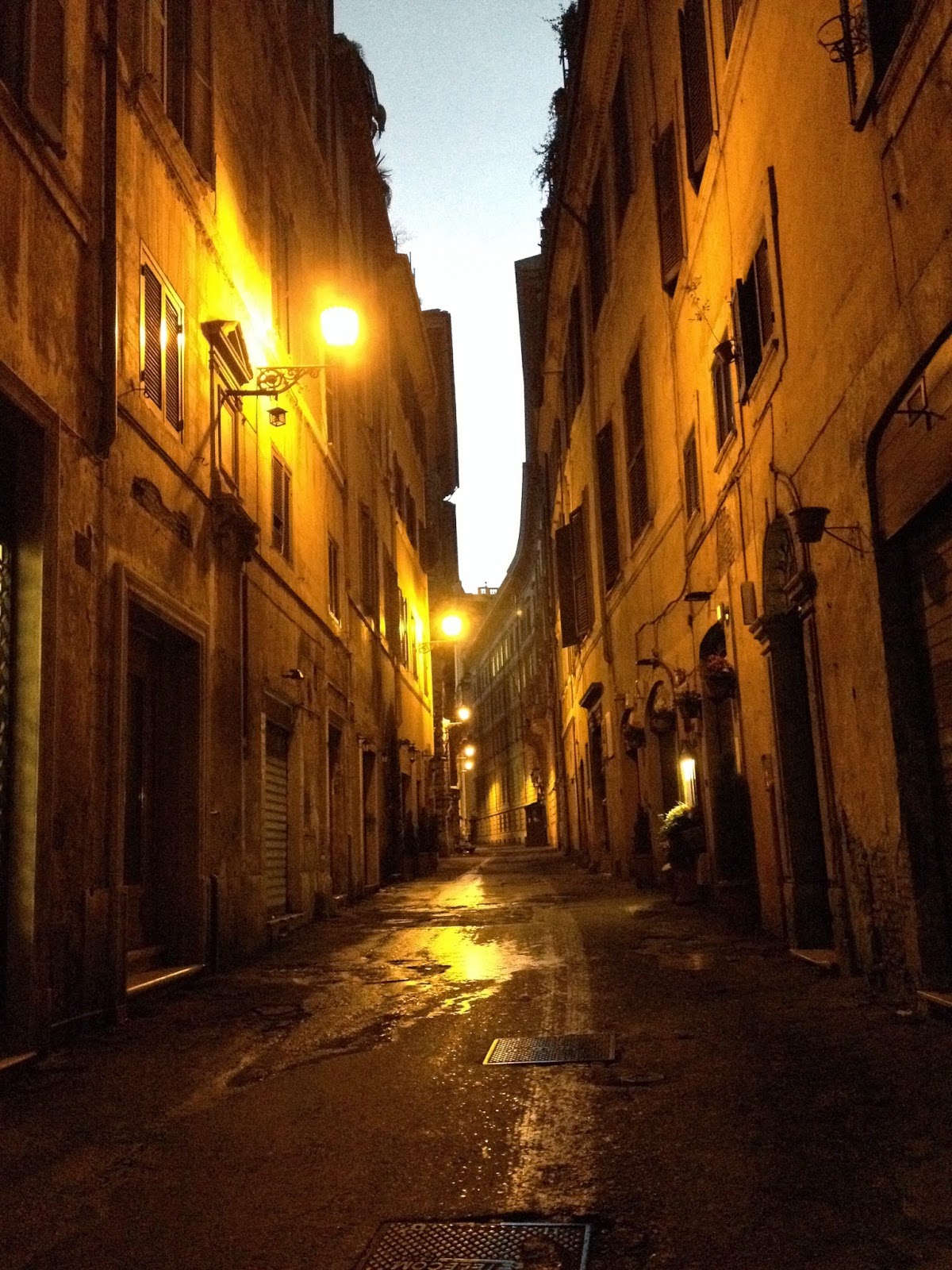 We'll see what happens. If the rain falls as expected, this could be a good day to return to the Pantheon to see the rain pouring through the oculus in the dome.

The city of Roma has ordered most vehicular traffic off of the streets and many busses are not running today. Schools are closed throughout the city - including Sapienza and the Angelicum - but not the Pontifical Gregorian University. I am not happy.

It rained for - at most - an hour and a half this morning and much that was just a normal, nothing too heavy. There aren't large puddles in the streets and all seems well. At this point, it seems just another instance of government incited panic over the weather (as often now happens in the U.S. with a couple inches of forecasted snow). Soon I'll take a little walk to the Tiber River to see how it looks.

It's now 8:11 p.m. in Rome and it's been raining steadily for at least an hour now, with lots of lightning and thunder. The lights have flickered a few times, but so far we haven't lost power.

I didn't make it out earlier to the Pantheon because just as I was about to walk out of our building the wind picked up, the rain fell heavily. The sky even almost had a greenish tint to it. This could be an interesting night.
Posted by Rev. Daren J. Zehnle, J.C.L., K.C.H.S. at 1:14 PM