A painting without being painted

Who are the Saints if not those who have sought the face of the God of Jacob (cf. Psalm 26:6) and now see God face to face (cf. Matthew 5:8)? Yes, the Saints now enjoy the Beatific Vision and behold the face of Jesus, for, as he himself says, "he who has seen me has seen the Father" (John 14:9). They now gaze in love and wonder upon full reality of this face, an image of which Jesus has left for us and is now housed at Manoppello: 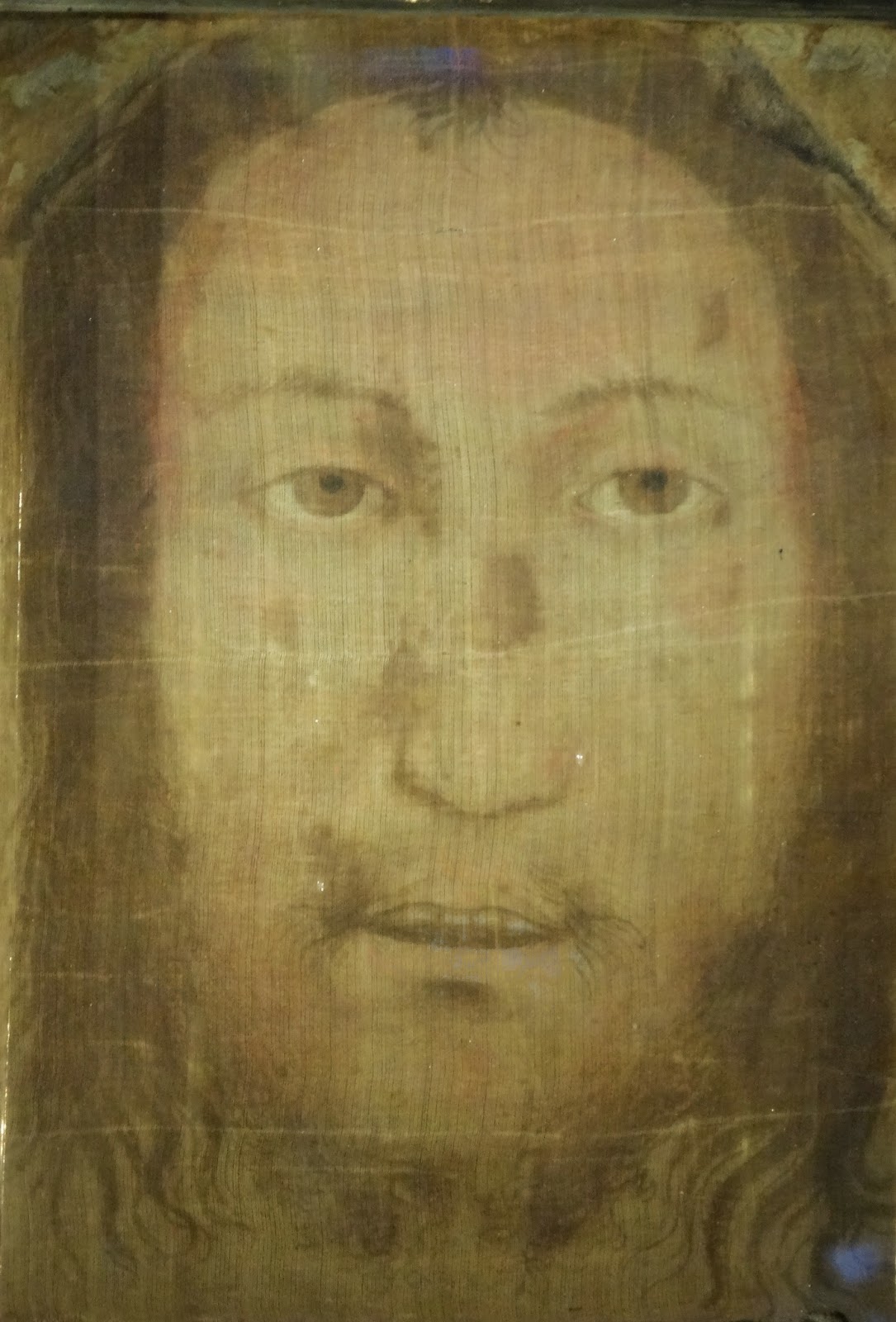 I have blogged many times before of Il Volto Santo, the Holy Face of Jesus and I will continue to do so because it is, quite simply, the most incredible thing I have ever seen; the veil venerated at Manoppello is more beautiful than even the natural wonders of Hawaii.

Simply consider what happens to the veil with the changing of light: 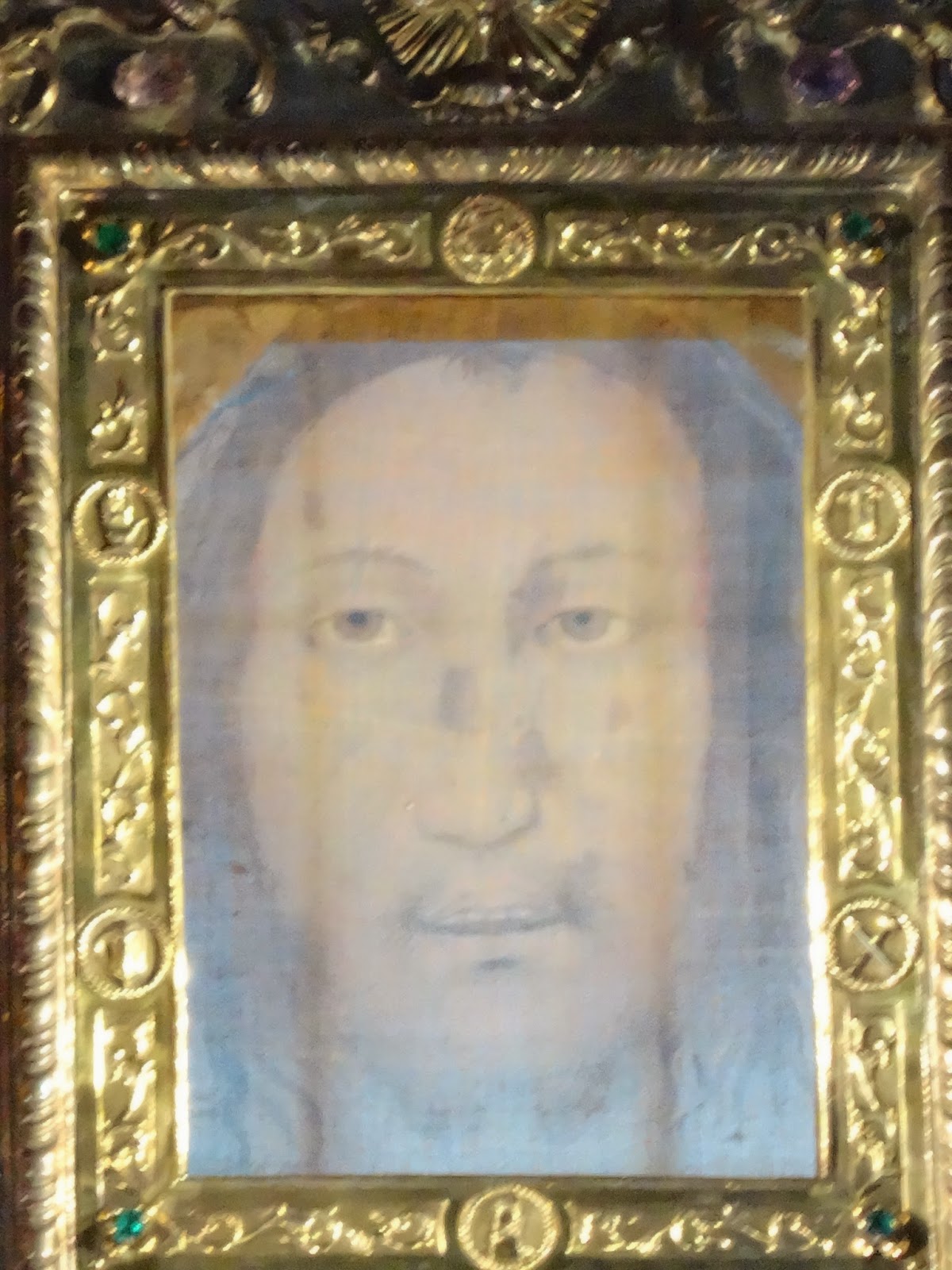 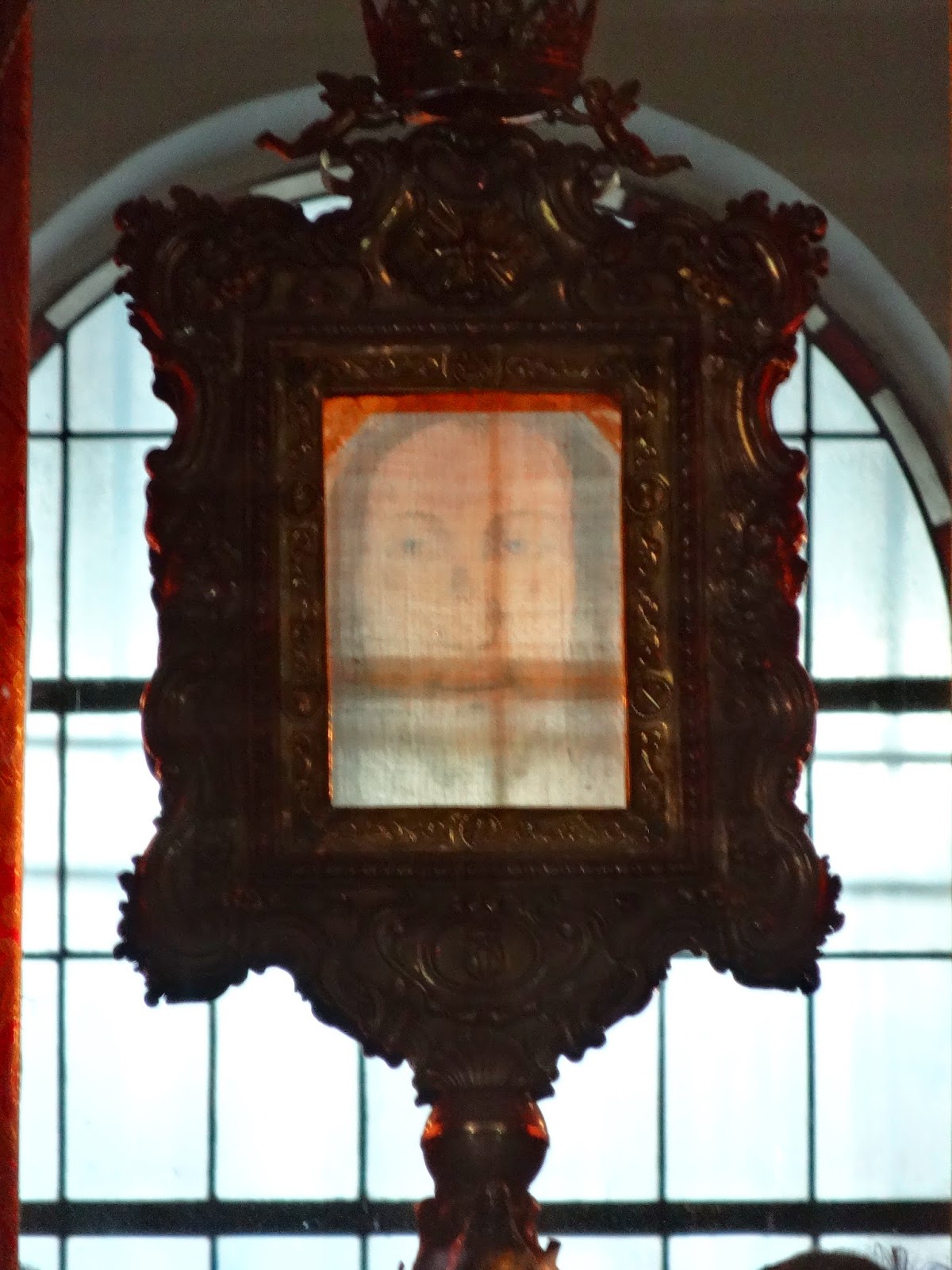 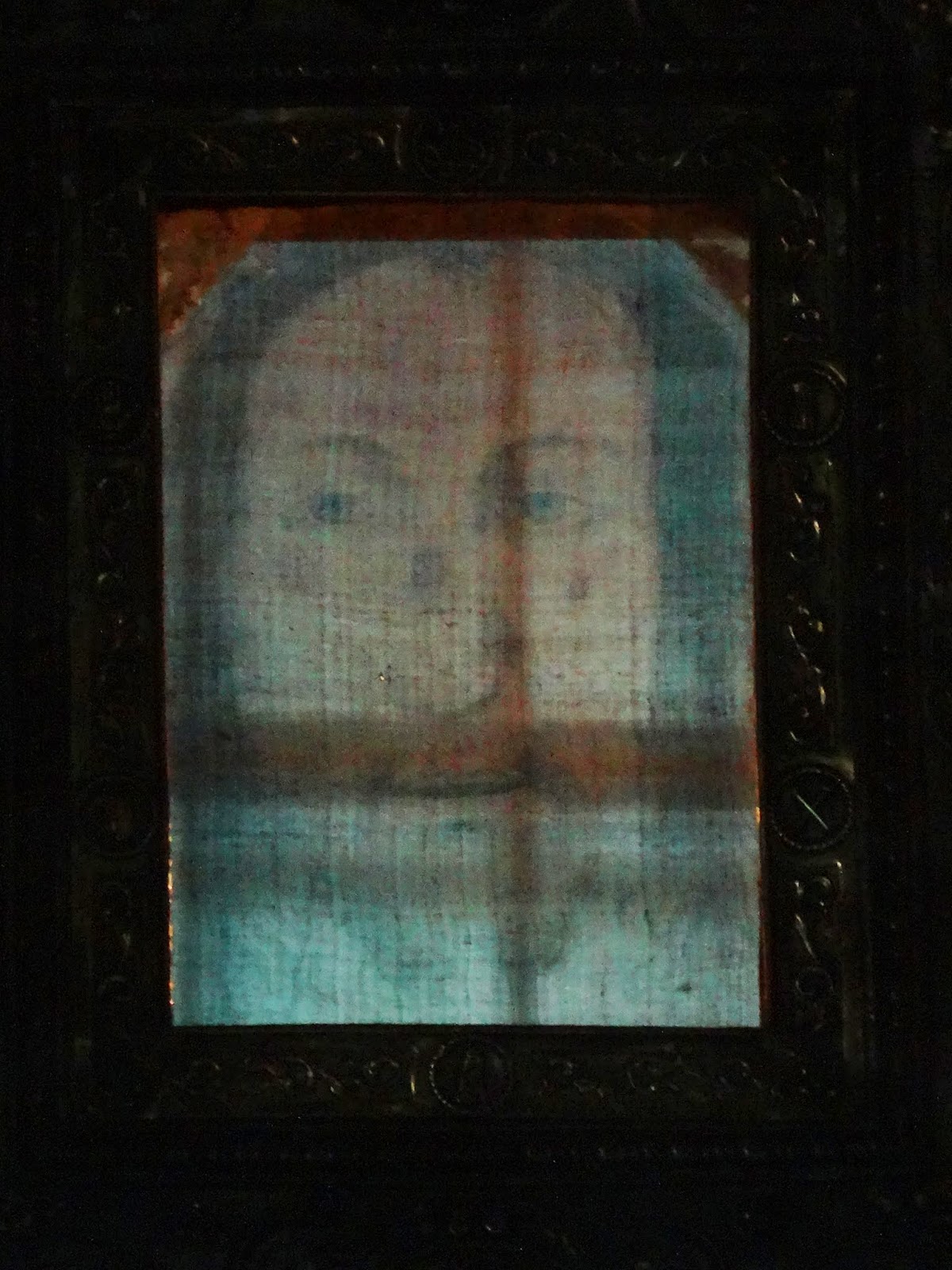 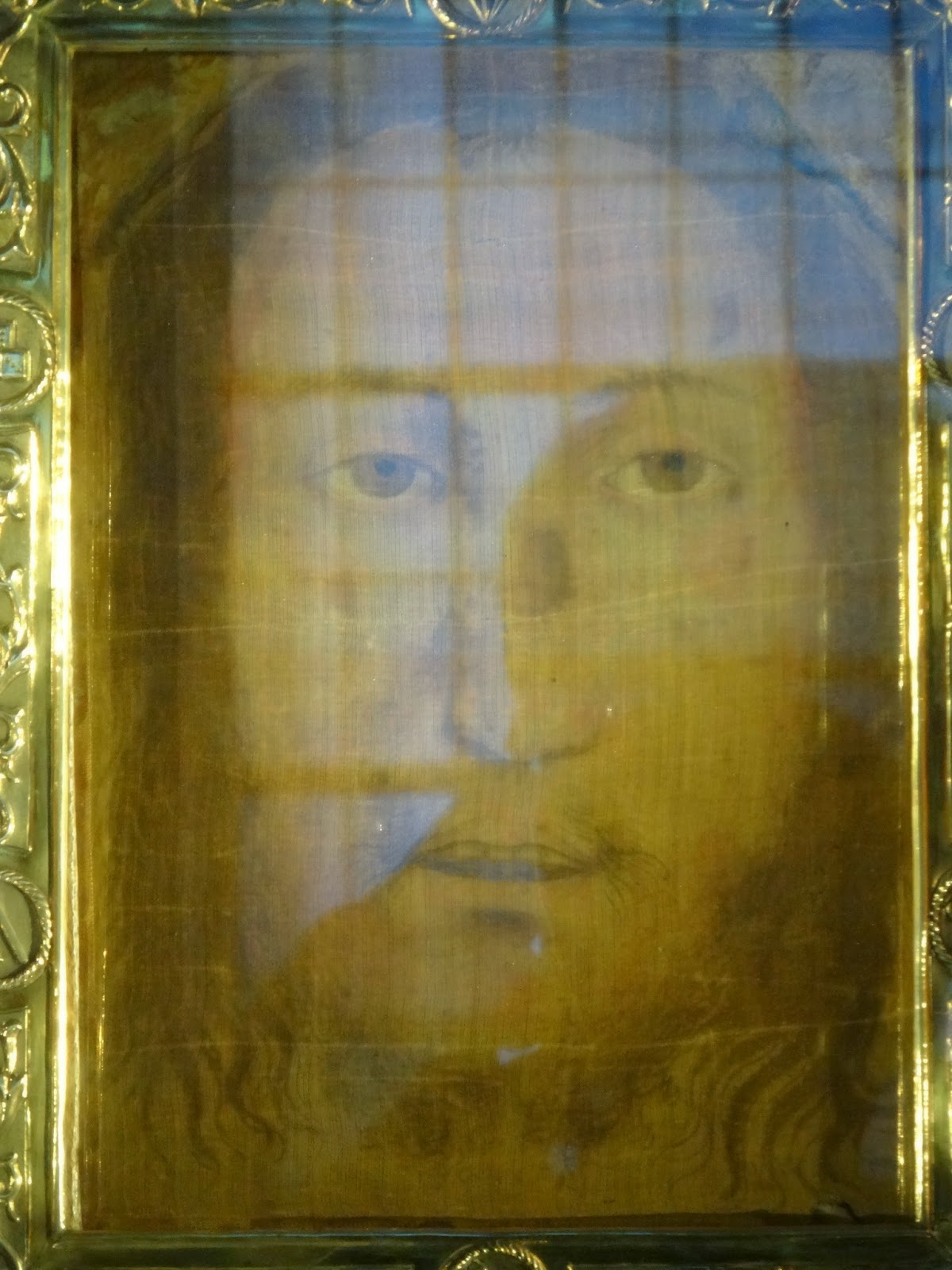 These photographs were all taken on my third and most recent pilgrimage to see Il Volto Santo this past Monday (I will return again this coming Saturday). What this image does is simply inexplicable.

Writing in 1645, Donato da Bomba wrote of the marvels of this holy image which has been kept at Manoppello since at least 1528:


...in addition to showing us the Suffering Lord and the effects of our sins, our Holy Image is the work of a kingly artist and is miraculously given to us, which is reason enough for it to be revered as something divine. As such, it is exposed so as to be honored and venerated by all. No commendations are necessary; it clearly commends itself. No need for me to tire myself in attempting to celebrate it with my pen; sufficient to point to it with the finger of devotion. Those who view it will understand for themselves what it is and its great value. It is the book of Christ's Passion, something divine. No brush could have painted it; Appelles and Parrasius could not produce anything like it. What is contained on that delicate Veil is better formed in the spirit and the devout heart. It is a painting without paint, appearing more immaterial than material. The Veil displays an image and a painting without being painted, yet he figure can distinctly be seen on both sides. Just viewing it is sufficient to make me want to venerate and revere it. I urge everyone to do likewise, accept the God-Man who is represented there for us, so that the Lord may welcome us into eternal life. Amen.

After scientifically examining the Veil, Professor Donato Vittore of the University of Bari, testified in his report:


I have seen no pigment of color that can be detected in the spaces between the woven threads. If the image were done by using oil paint, I would imagine that small deposits of color would be between one thread and the other. I must therefore conclude that this technique was not used on the relic of Manoppello.

I also exclude the possibility of water-color, because the outlines of the eyes and the mouth on the image are so sharp and exact. Water-color would surely penetrate the fibers in an imprecise manner and therefore would lead to a smudging of the details. The Holy Face cannot be printed, since the image is visible in exactly the same manner on both sides of the Veil. We are speaking of something dating from the year 1500 at least, a time when technical skills were not as sophisticated as today.