My favorite moment of the Rite of Installation of a Bishop occurs after the Papal Bull of appointment has been read and shown to the College of Consultors and after the Bishop-elect has accepted the Papal mandate. He is then led to his cathedra and seated upon it, after which he has handed his crozier.

Here is that moment when His Excellency the Most Reverend Thomas John Paprocki was installed as the ninth Bishop of the Diocese of Springfield in Illinois almost four years ago: 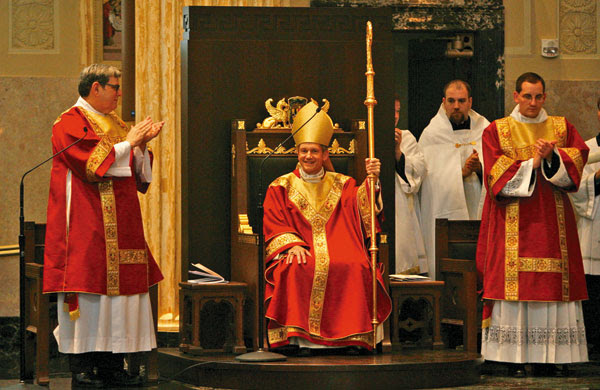 It was with some surprise, then, that I noticed that His Excellency the Most Reverend Blase J. Cupich was seated upon his cathedra a few moments ago when he was installed as the ninth Archbishop of of the Archdiocese of Chicago.

I wondered: If he did not take possession of his cathedra, was he installed as the Archbishop?

The Code of Canon Law provided the answer to my question: Yes. As the canons stipulate:


A Bishop takes canonical possession of his diocese when, personally or by proxy, he shows the apostolic letter to the college of consultors, in the presence of the chancellor of the curia, who makes a record of the fact. This must take place within the diocese (canon 382 § 3).


He did, then, take possession of his See, even if the prescriptions of the ritual were not closely adhered to, apparently through a miscommunication.
Posted by Rev. Daren J. Zehnle, J.C.L., K.C.H.S. at 3:13 PM