Shopping in Italy: Frustration and Fascination

Living in Italy, one has the impression that the number one goal of any Italian at any given moment - or at least the great majority of them - is not to work right now (with no real thought given to what that might mean down the road). More often than not, you - the customer - are given the not-so-subtle impression that you are a bother to the shopkeeper, an interruption in his or her doing nothing, and getting his or her assistance - or even sensible answers to clear questions - can often be quite a struggle. However, once you've made your purchase, the same worker who a moment ago would hardly speak a word to you, now wants to have a lengthy conversation. Why? You are no longer the enemy. Welcome to Italy. True story.

Let's take another example, say, a trip to the store to pick up something simple, like a light bulb. Let's say, too, that you've bought light bulbs in this particular store before, but today you do not see any where they are usually located. You go to the counter to ask the worker if he has any light bulbs of the kind you want. He walks with you back to the shelf and, when he also sees none there, tells you he is out of this particular light bulb. Walking with him back to the counter, you chat with him a bit when you notice a light bulb - of the kind you want - behind the counter. You point it out to him and ask if you might buy that light bulb. He will turn and look behind the counter but will never see the light bulb. Why? Because in a round about way, you've unknowingly called him a liar (because he just told you he was out of that light bulb). Welcome to Italy. True story.

Or another example, like buying a pinino (a sandwich). You enter the panineria and ask if he has a panino with prosciuto crudo (it's a really good cured ham), mozzarella, and tomatoes (if you can find one, you should try it). He looks at you with exasperation. Why? Because he lots of panini already made, though none of them are what you requested. He has all of the ingredients, but making this particular sandwich would require a bit of work right now. Never mind the fact that you made up your mind to never visit this shop again, even though you walked by it almost every day. Welcome to Italy. True story. Now, this particular shop is closed for good. True story.

The only thing I've seen Italians do quickly is put up scaffolding; they are amazingly fast at this. One morning I walked past a 5 or 6 story building and when I walked by it again about two hours later, the entire building was covered in scaffolding. I was shocked. Why scaffolding goes up so quickly, I do not know.

Every now and again, though, an Italian will surprise you in that when he does decide it is now time to work, he does what he does very well. Take, for example, a little shopping I did back in Assisi a week ago when I bought a few gifts for myself.

After looking around in the store for only a moment, I knew I would buy something because I very much enjoyed the items sold in the store. When a friend and I recruited the shop keeper's help, he was very friendly and spoke with us his offerings, which ultimately helped me make my selection.

After taking the items to his desk (many Italian shops don't have what we would call a counter), he took his time first writing down each price before adding them up and giving me a total. He then, to my surprise, began boxing my items up and wrapping them, a process he finished by attaching a bow to each box.

On the one hand, this was nice and pleasant; but on the other hand, I found myself simply wanting to pay and be on my way. The items, were, after all, only for me: 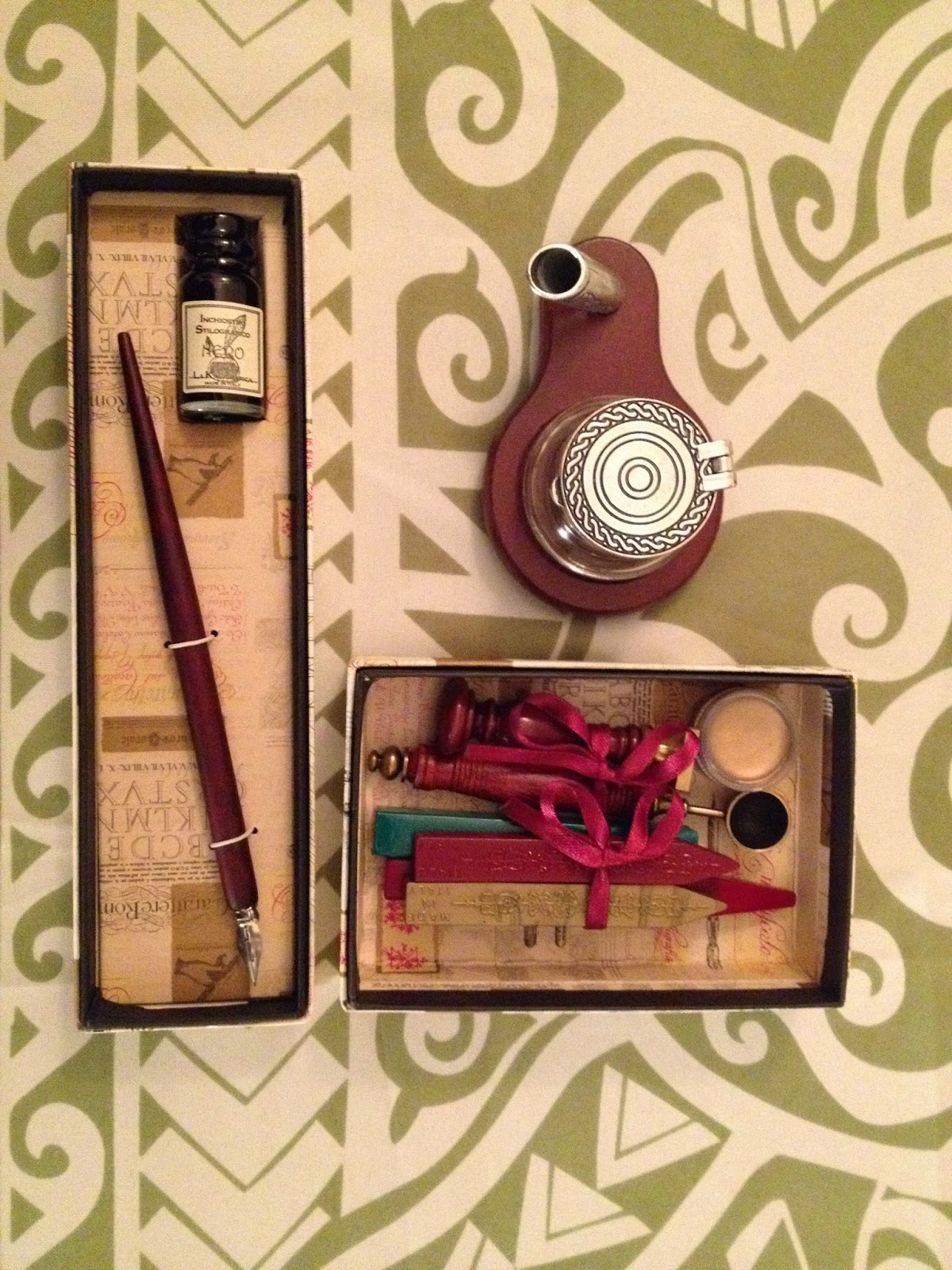 If you can't quite make out the items, they are a quill of sorts with a bottle of ink, an ink well and holder for the quill, and sticks of wax, a seal, a scoop of sorts in which to melt to wax, and a small container of something to gently rub over the wax seal to make it shine with a golden hue. I expect to get much enjoyment out of these items, though they will not likely be used with great frequency.

One the items were wrapped and paid for, the shop keeper continued talking with us. When I mentioned I hope to return frequently to Assisi - as often as one weekend each month - he invited me to return to his shop each time for a visit, an invitation I will likely accept.
Posted by Rev. Daren J. Zehnle, J.C.L., K.C.H.S. at 5:53 AM