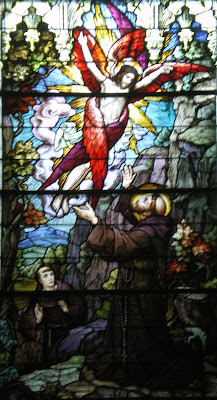 We can come to the conclusion, without any doubt, that this messenger of God - so worthy to be loved by Christ, imitated by us and admired by the world - was God's servant Francis, if we consider the height of his extraordinary sanctity.  For even while he lived among men, he imitated angelic purity so that he was held up as an example for those who would be perfect followers of Christ.

We are to hold this firmly and devoutly because of his ministry to call men to weep and mourn, to shave their heads, and to put on sackcloth, and to mark with a Tau the foreheads of men who moan and grieve, signing them with the cross of penance and clothing them with his habit, which is in the form of a cross.

But even more is this confirmed with the irrefutable testimony of truth by the seal of the likeness of the living God, namely of Christ crucified, which was imprinted on his body not by natural forces or human skill but by the wondrous power of the Spirit of the living God.