I was visiting with one of the priests here at the Casa Santa Maria a few minutes ago.  As we talked, he noticed an opened can of DrPepper sitting on my table (I bought 15 cans yesterday afternoon at the only store in all of Rome that sells DrPepper) and he asked if he could have a look at it.

(Incidentally, I just noticed that on the DrPepper web site you can now order your own unique t-shirt using the DP slogan, "I'm a ..." with the DrPepper logo and fill in the "..." with what you like.  I tried one with "I'm a hobbit, in all but size".  I liked the look and will have to give it some thought.  If you have Peppers in your life, these would make great fun and inexpensive gifts!)

The cans that I buy come from the United Kingdom and so have a somewhat different look than the cans sold in the United States of America, though the maroon color remains a distinct aspect: 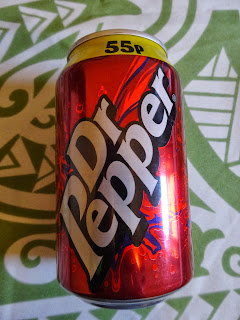 As he examined the can he said in a declaratory style: "A sparkling fruit flavour soft drink".  Thinking it an apt description of the King of Beverages, I agreed, and then realized he read it from the can.

This phrase prompted me to take a closer look at the can.  I was surprised to see that each can has only 42 calories, compared to 150 in the U.S. and only 10.3 grams of sugar, compared to, if memory serves, 39 in the U.S.  There is no high fructose corn syrup, the flavor is enhanced, and the caffeine level seems the same.

At any rate, I also noticed another phrase on the can, which made me laugh: "what's the worst that could happen?"  I don't know, but at the moment the best that can happen is it will help me study Latin and the general norms of canon law.
Posted by Rev. Daren J. Zehnle, J.C.L., K.C.H.S. at 7:40 AM