Pope Francis to Saint Francis: Teach us to remain before the Cross

At any rate, the Holy Father's words follow, with my emphases: 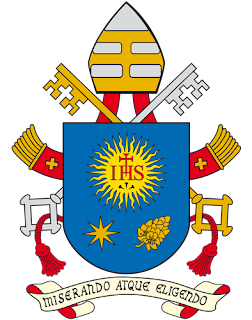 I give you thanks, Father, Lord of heaven and earth, for you have hidden these things from the wise and understanding, and revealed them to babes” (Mt 11:25).

Peace and all good to each and every one of you! With this Franciscan greeting I thank you for being here, in this Square so full of history and faith, to pray together.

Today, I too have come, like countless other pilgrims, to give thanks to the Father for all that he wished to reveal to one of the “little ones” mentioned in today’s Gospel: Francis, the son of a wealthy merchant of Assisi. His encounter with Jesus led him to strip himself of an easy and carefree life in order to espouse “Lady Poverty” and to live as a true son of our heavenly Father. This decision of Saint Francis was a radical way of imitating Christ: he clothed himself anew, putting on Christ, who, though he was rich, became poor in order to make us rich by his poverty (cf. 2 Cor 8:9). In all of Francis’ life, love for the poor and the imitation of Christ in his poverty were inseparably united, like the two sides of a coin. 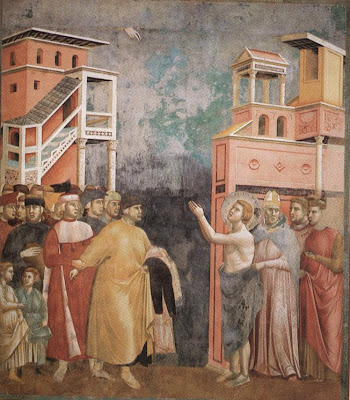 What does Saint Francis’s witness tell us today? What does he have to say to us, not merely with words – that is easy enough – but by his life?

1. His first and most essential witness is this: that being a Christian means having a living relationship with the person of Jesus; it means putting on Christ, being conformed to him.

Where did Francis’s journey to Christ begin? It began with the gaze of the crucified Jesus. With letting Jesus look at us at the very moment that he gives his life for us and draws us to himself. Francis experienced this in a special way in the Church of San Damiano, as he prayed before the cross which I too will have an opportunity to venerate. On that cross, Jesus is depicted not as dead, but alive! Blood is flowing from his wounded hands, feet and side, but that blood speaks of life. Jesus’ eyes are not closed but open, wide open: he looks at us in a way that touches our hearts. The cross does not speak to us about defeat and failure; paradoxically, it speaks to us about a death which is life, a death which gives life, for it speaks to us of love, the love of God incarnate, a love which does not die, but triumphs over evil and death. When we let the crucified Jesus gaze upon us, we are re-created, we become “a new creation”. Everything else starts with this: the experience of transforming grace, the experience of being loved for no merits of our own, in spite of our being sinners. That is why Saint Francis could say with Saint Paul: “Far be it for me to glory except in the cross of our Lord Jesus Christ” (Gal 6:14).

We turn to you, Francis, and we ask you: Teach us to remain before the cross, to let the crucified Christ gaze upon us, to let ourselves be forgiven, and recreated by his love.

This is the second witness that Francis gives us: that everyone who follows Christ receives true peace, the peace that Christ alone can give, a peace which the world cannot give. Many people, when they think of Saint Francis, think of peace; very few people however go deeper. What is the peace which Francis received, experienced and lived, and which he passes on to us? It is the peace of Christ, which is born of the greatest love of all, the love of the cross. It is the peace which the Risen Jesus gave to his disciples when he stood in their midst and said: “Peace be with you!”, and in saying this, he showed them his wounded hands and his pierced side (cf. Jn 20:19-20).

Franciscan peace is not something saccharine. Hardly! That is not the real Saint Francis! Nor is it a kind of pantheistic harmony with forces of the cosmos… That is not Franciscan either; it is a notion some people have invented! The peace of Saint Francis is the peace of Christ, and it is found by those who “take up” their “yoke”, namely, Christ’s commandment: Love one another as I have loved you (cf. Jn 13:34; 15:12). This yoke cannot be borne with arrogance, presumption or pride, but only with meekness and humbleness of heart.

We turn to you, Francis, and we ask you: Teach us to be “instruments of peace”, of that peace which has its source in God, the peace which Jesus has brought us.

3. “Praised may you be, Most High, All-powerful God, good Lord… by all your creatures (FF, 1820). This is the beginning of Saint Francis’s Canticle. Love for all creation, for its harmony. Saint Francis of Assisi bears witness to the need to respect all that God has created, and that men and women are called to safeguard and protect, but above all he bears witness to respect and love for every human being. God created the world to be a place where harmony and peace can flourish. Harmony and peace! Francis was a man of harmony and peace. From this City of Peace, I repeat with all the strength and the meekness of love: Let us respect creation, let us not be instruments of destruction! Let us respect each human being. May there be an end to armed conflicts which cover the earth with blood; may the clash of arms be silenced; and everywhere may hatred yield to love, injury to pardon, and discord to unity. Let us listen to the cry of all those who are weeping, who are suffering and who are dying because of violence, terrorism or war, in the Holy Land, so dear to Saint Francis, in Syria, throughout the Middle East and everywhere in the world.

We turn to you, Francis, and we ask you: Obtain for us God’s gift of harmony and peace in this our world!

Finally, I cannot forget the fact that today Italy celebrates Saint Francis as her patron saint. The traditional offering of oil for the votive lamp, which this year is given by the Region of Umbria, is an expression of this. Let us pray for Italy, that everyone will always work for the common good, and look more to what unites us, rather than what divides us.

I make my own the prayer of Saint Francis for Assisi, for Italy and for the world: “I pray to you, Lord Jesus Christ, Father of mercies: Do not look upon our ingratitude, but always keep in mind the surpassing goodness which you have shown to this City. Grant that it may always be the home of men and women who know you in truth and who glorify your most holy and glorious name, now and for all ages. Amen.” (The Mirror of Perfection, 124: FF, 1824).