Today being Halloween, I thought it would be fitting to visit the church of Santa Maria della Concezione dei Cappuccini, perhaps more commonly known simply as "the bone church" because of the uniqueness of what is found there.

It is best know for its crypt where are interred the bones of some 3,700 deceased, most of whom are Capuchin friars, in which can be viewed sights such as these:

My favorite arrangement of bones is this one, made from the mortal remains of a princess of an Italian noble family: 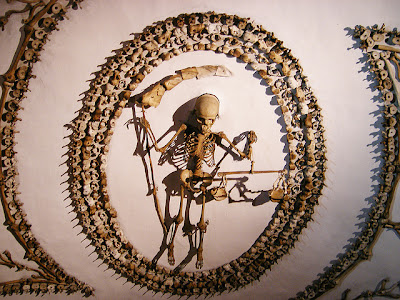 When first you enter the crypt, you cannot help but feel a bit creeped out by the artistic arrangement of bones, but the longer you contemplate what is before you the more beautiful it becomes.

The arrangement of the bones was completed by 1775, when we find the first known mention of it, though when the arrangement was done or by whom it was is uncertain.

As you make your way slowly through the crypt, one cannot help but recall the words we hear on Ash Wednesday: "Remember, man, that you are dust and to dust to you shall return," a statement taken from Genesis 3:19.  This particular form of art has, over the years, come to be known as memento mori art.  As a post last year at The Art of Manliness noted, the phrase memento mori


is believed to originate from an ancient Roman tradition in which a servant would be tasked with standing behind a victorious general as he paraded though town. As the general basked in the glory of the cheering crowds, the servant would whisper in the general’s ear: “Respice post te! Hominem te esse memento! Memento mori!” = “Look behind you! Remember that you are but a man! Remember that you will die!”

The decoration of this crypt is nothing less than a reminder to each of us that we, too, will die.  Indeed, every cemetery also serves this very purpose, in addition to providing a fitting resting place for the dead.

It is not a bad remember for each of us and is partly why Saint Francis of Assisi - and so many others - spent countless hours of their lives contemplating death.  The poor man of Assisi once prayed, "Grant that we may be ready to die for love of your love, as you died for love of our love."

Housed within the museum is a powerful image of Saint Francis contemplating death by Caravaggio, of which I was happy to buy a large print:

As I walked among those bones, I recalled the words of Saint Damien of Moloka'i, the Leper Priest: "
We must all die ... So let us begin from this day to prepare for a happy death.  Let us not lose a moment of the little time we still have to live."  Paradoxically, when we remember death we remember life, we remember the life we are called to live.

For some, this can lead to despair, as they recognize how often and how greatly they have failed to love both God and neighbor, but it need not be so.  Remembering death, we cannot also but remember the death that the Son of God died for us, and remembering the depth of his love we can experience anew the mercy he longs to bestow upon us.

The crypt is composed of several adjacent rooms, connected by a common hallway.  Before leaving the crypt area you pass by an altar at which the Holy Mass is offered for the deceased, above which is a depiction of the raising of Lazarus from the dead.  This crypt is then not a morbid display of what will become of each of us, but is rather a monument to the glory of the coming resurrection of the dead, when those bones made to decorate sacred ground will be reunited and - we pray - walk in the presence of God.

To each of those bones, the Lord Jesus will command, "Come forth" (John 11:43)!  Those same words, we, too, will hear when at last he comes.

To remember death is to contemplate eternity and the glory to which we are called.  This, in the end, is what the celebration of Halloween is about.  It is - in many ways - a mockery of death, because we know that death has been defeated.  We, too, mock with Saint Paul: "Death is swallowed up in victory.  Where, O death, is your victory?  Where, O death, is your sting" (I Corinthians 15:54-55)?

We see this in tomorrow's celebration of All Saints and the next day's celebration of All Souls; on the first, we celebrate that which we are all called to be, and on the second we pray for those who have died in friendship with God though not yet perfected.
Posted by Rev. Daren J. Zehnle, J.C.L., K.C.H.S. at 10:58 AM