Persecution: The unreported catastrophe of our time 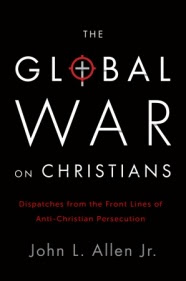 The persecution of Christians throughout the world is occurring with greater frequency every day, though you may not know if from what you see in the much of the media today.  Writing for The Spectator, John L. Allen, Jr. recently wrote on what he calls "the unreported catastrophe of our time":


Imagine if correspondents in late 1944 had reported the Battle of the Bulge, but without explaining that it was a turning point in the second world war. Or what if finance reporters had told the story of the AIG meltdown in 2008 without adding that it raised questions about derivatives and sub-prime mortgages that could augur a vast financial implosion?

Most people would say that journalists had failed to provide the proper context to understand the news. Yet that’s routinely what media outlets do when it comes to outbreaks of anti-Christian persecution around the world, which is why the global war on Christians remains the greatest story never told of the early 21st century.

Throughout the remained of the article, Allen, who is one of the few reporters actually paying attention to this tragedy, provides a country-by-country in various parts of the world, which is well worth reading.  After providing these accounts of an increasing global persecution over the past several years, Allen asks why this remains largely  unreported:


Why are the dimensions of this global war so often overlooked? Aside from the root fact that the victims are largely non-white and poor, and thus not considered ‘newsmakers’ in the classic sense, and that they tend to live and die well off the radar screen of western attention, the global war also runs up against the outdated stereotype of Christianity as the oppressor rather than the oppressed.

Say ‘religious persecution’ to most makers of cultured secular opinion, and they will think of the Crusades, the Inquisition, Bruno and Galileo, the Wars of Religion and the Salem witch trials. Today, however, we do not live on the pages of a Dan Brown potboiler, in which Christians are dispatching mad assassins to settle historical scores. Instead, they’re the ones fleeing assassins others have dispatched.

If you've ever attempted to alert others to the reality of what is happening to our brothers and sisters in so much of the world, you'll know he's correct.

Please, read the entire article, fast and pray for the persecuted, and help to spread the news.

The article is written in connection to the publication of Allen's latest book, The Global War on Christians: Dispatches from the Front Lines of Anti-Christian Persecution, which I hope to be able to find in Rome.
Posted by Rev. Daren J. Zehnle, J.C.L., K.C.H.S. at 12:11 AM