When I awoke this morning I had every intention of posting something insightful about Saint Monica, but the day got away from me and now - to be quite honest - I don't quite feel like doing it, with no disrespect meant to the mother of the Doctor of Grace.
Instead, I'll give you a recap of yesterday and today.
After celebrating Mass yesterday morning, I saw to a few details at the high school and then drove to the See City to meet with the director of the Office for Human Resources. She talked with me about hiring employees, the safe environment program and other such details. It was a good visit and she offered some helpful suggestions.
On an aside, "human resources" is a phrase I've never liked. People are not "resources;" they are people, and should be treated as such. Such an office would be better titled the Office for Personnel, or some such thing.
After meeting with her I met with my "Pastor Mentor." He is a good friend of mine and a former pastor who will meet with me periodically as I take up my first pastorate to listen to me and to offer his advice and guidance. It is a relationship that I look forward to deepening over the years.
I around in Springfield a bit for herbs de Provence. I want them so I can try a chicken in a lemon cream sauce over a pasta but, sadly, could not find them in Springfield. I suppose I'll have to look online.
I returned to Effingham in time for soccer practice. We spent much of it preparing the field for our first game tomorrow evening in our weekend tournament. We painted one of the goals an electric neon green, at the insistence of the players: 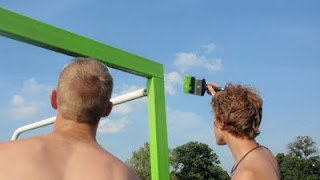 When they first talked about it I wasn't sure what I thought of it, but seeing it I really liked it.
After practice I wrote a few thank you notes and went to bed.
After Mass this morning I had a radio interview about a variety of topics.
When I returned to the office I wrote a few more thank you notes saw to a few arrangements to my trip to Rome in October for the canonization of Father Damien.
I visited with a parishioner for a while who wanted to see me before I move to Virden. After our visit I had lunch with two other parishioners who wanted to see me.
I returned to the office for more thank you notes and correspondence and I briefly touched base with the priest who will take my place here to give him two weddings on my docket.
At soccer practice we learned that we, unfortunately, had to paint our goals white and so we lost the green color about which we were all excited.
Since we play our first game of the season tomorrow, some of the parents hosted a pasta night for us which I followed with a brief meeting with a couple seeking to be married.
They've been two full days one after another.
Tomorrow, I hope to write my homily for the weekend and take a bit of a quiet day.
Posted by Rev. Daren J. Zehnle, J.C.L., K.C.H.S. at 8:23 PM