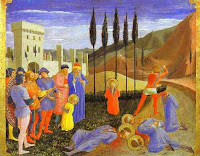 Holy Mother Church celebrates today the optional memorial of Saints Cosmas and Damian, two of my favorite Saints if no other reason than the story of their martyrdom.

These two brothers lived in Syria in the second half of the third century and were both physicians. In Cyrrhus, Syria, the brothers received the grace of martyrdom around the year 300.

With three other brothers – Antimas, Leontius and Euprepius – Cosmas and Damian were born to their pious mother, Theodoche in Egea, a city in Arabia.

They devoted themselves especially to the care of the sickly poor and refused to accept money for their services because, as the Golden Legend relates they answered the Proconsul Lisias, “as for earthly fortunes, Christians do not acquire them.” Because of their refusal to accept money Cosmas and Damian were called the anargupoi, “the moneyless ones.”

When Cosmas learned of this he was furious and instructed that, upon his death, he was not to be buried with Damian. Later that night the Lord appeared to Cosmas in a dream and explained the situation, thereby satisfying him, but not soon enough, for word of the brothers reached the ears of above-mentioned Lisias.

The proconsul ordered the brothers – together with the other three - to be brought before him and ordered that they burn incense to the gods of Rome. The Golden Legend continues:

When the five brothers unanimously refused to sacrifice, Lisias commanded that they be tortured in their hands and feet. They made light of these torments, and he ordered them to be bound with chains and thrown into the sea, but at once they were drawn out by an angel and set before the judge. This official gave thought to the matter and said: “By the great gods, it is by sorcery that you conquer, because you mock at torments and calm the sea! Therefore teach me your magic arts, and in the name of the god Adrian I will follow you.” No sooner had he said this than two demons appeared and struck him in the face with great force, and he cried out, “I beg you, good men, to pray for me to your God!” They prayed, and the demons disappeared.

The judge said: “You see how angry the gods are with me because I thought of leaving them. Now therefore I will not suffer you to blaspheme my gods!” He ordered them to be thrown into a huge fire, but the flame not only left the martyrs unharmed, but leapt out and slew many bystanders. The brothers were then stretched on the rack, but their guardian angel kept them uninjured, and the torturers, tired of beating them, returned to the judge. He in turn had three of the brothers put back in prison, but ordered Cosmas and Damian to be crucified and stoned by a crowd. The stones were turned back upon the throwers and wounded a great number. The judge, now beside himself with rage, had the three brothers brought out and ranged around the cross, while four soldiers shot arrows at Cosmas and Damian, still crucified; but the arrows turned and struck many, while the holy martyrs remained untouched. The judge, defeated at every turn, was at death’s door from frustration and had the five brothers beheaded in the morning. The Christians, remembering what Saint Cosmas had said about not burying him with Damian, wondered how the martyrs wanted to be buried, when suddenly a camel appeared on the scene, spoke in a human voice, and ordered the saints to be entombed in one place. They suffered under Diocletian, who began to reign about a.d. 287.

How can you not love a story like that?

Together Cosmas and Damian are the patrons of physicians, surgeons, druggists, barbers, the blind and, curiously, confectioners.
As a side note, the young Joseph de Vuester chose the name Damien in honor of Saint Damian.
Posted by Rev. Daren J. Zehnle, J.C.L., K.C.H.S. at 7:36 AM

Email ThisBlogThis!Share to TwitterShare to FacebookShare to Pinterest
Labels: Cosmas and Damian