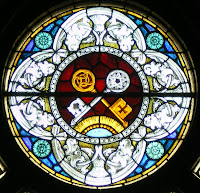 Today I found myself doing yet another thing I never imagined I would do.
I've often said to the boys - as I've also said on this blog - that you can stop a priest at any time and ask him to hear your confession. He can only refuse to do so for a just cause. Today, one of the boys took me up on this (I share this with his permission).
Standing there on the sidelines in the middle of soccer practice I found myself talking with one of the boys about sins that I thought were hypothetical; apparently they weren't.
He asked to be forgiven for them and I remarked that we were not in confession. When he asked what to do to enter confession, we stepped back a few feet out of earshot and I heard his confession and absolved his sins right there on the sidelines.
It was truly a graced encounter. Afterwards he said, "I feel like a huge burden has been lifted from my shoulders." "That's because one has," I said. Of all of the activities of the day, this was the highlight, the two celebrations of the Holy Mass excepted.
Saint Paul famously said that he sought to become "all things to all men to save at least some" (I Corinthians 9:22).
May we priests of Jesus Christ seek to become the same! And may the Holy Spirit guide us to meet people where they are, so as to bring to them the tender mercy of God in every place and at any time. And may more people seek out their priests, imploring from the mercies of God, wherever they may be.
Posted by Rev. Daren J. Zehnle, J.C.L., K.C.H.S. at 9:20 PM