Travels in England: The Round Table and King Arthur's Grave

A meme has been going round on Facebook over the last few days that several friends have shared with me:

Though I am a great fan of King Arthur and the Knights of the Round Table, and I have been since I was a boy, I find this meme to be something of a groaner. The timing of the meme, however, is interesting, because it was only a few days ago that I visited the Great Hall at Winchester to see the Round Table that hangs there.

Part of the beauty and the appeal of the Arthurian legends is the manner in which this body of literature has been - and continues to be - adapted in different times and places for various means and purposes. As the Matter of Britain grew and expanded, new elements were introduced by particular authors.

The Round Table, for instance, perhaps the most politically important element of Arthuriana, was, so far as we can tell, introduced into the corpus in 1155 by Robert Wace in his "translation" of Geoffrey of Monmouth's History of the Kings of Britain. Concerning the Round Table, Wace writes: 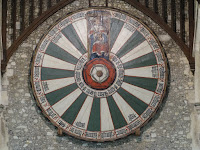 Arthur fashioned the Round Table
Of which many tales are told
There sit his knights,
Each one equal to the next:
The sit equally at the Table
And are equally served.
None of them can boast
That he sits ahead of the next.
None has a favored position,
And none is excluded.

Sir Thomas Malory (if memory serves, though it may have been Chrétien de Troyes) would later say instead that the Round Table was not made by King Arthur, but received as a wedding gift from Guinevere's father, King Leodegrance, though the symbolism given to the Round Table by Robert Wace was retained.

Hanging today in the Great Hall at Winchester is a Round Table that, although repainted by order of King Henry VIII around 1516, the table itself dates between 1250 and 1350 and was likely constructed by order of either King Edward I (who sought to make use of the Arthurian Legends to his advantage) or of King Edward II. This Round Table measures some eighteen feet in diameter and weighs 1.3 tons: 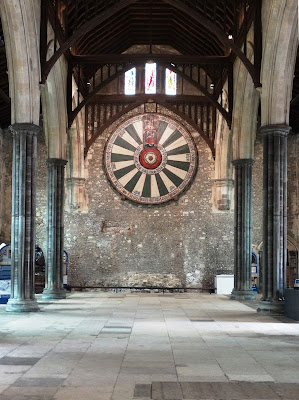 From Winchester, I made my way to Glastonbury where, in 1191, the monks of Glastonbury Abbey - one of the finest in England - claimed to have discovered the lost (and previously forgotten) grave of King Arthur and Queen Guinevere. 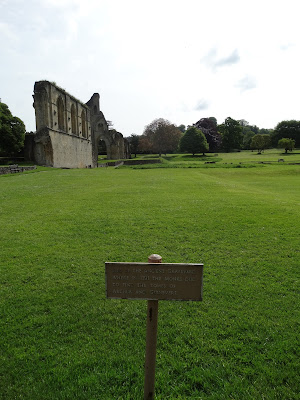 Gerald of Wales relates what was found in his De Instructione Principis, written about 1223:

However, Arthur’s body, which the fables allege was like a fantastic thing at the end, and as it were moved by the spirit to far away places, and not subject to death, in our own days was discovered at Glastonbury between two stone pyramids erected in the holy cemetery, hidden deep in the ground by a hollow oak and marked with wonderful signs and marvels, and it was moved into the church with honor and committed properly to a marble tomb. Whence a leaden cross with a stone underneath, not above as it usually is in our day, but rather lower nailed on the side, (which I have seen, and in fact I have traced these sculpted letters - not projecting and protruding, but carved into the stone) contains the words: “Here lies buried the famous King Arthur with Guinevere, his second wife, in the isle of Avalon.”

At the time, not everyone accepted the claim of the monks and some viewed it as an utter deception, a belief held by many - though not all - historians and archeologists today. in fact, Graham Phillips claimed last month to have discovered two possible locations for King Arthur's grave in Shropshire (I'm a bit skeptical of his claims, but I haven't yet read his book and my skepticism is greatly increased by looking at the titles of his books). 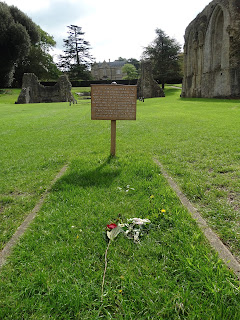 Several decades later, King Edward I ordered the exhumation of the mortal remains and their re-interment in a marble tomb in the sanctuary of the great abbey on Easter Tuesday in 1278, as Adam of Domerham recounts:

[T]he lord king had the tomb of the famous king Arthur opened. Wherein in two caskets painted with their pictures and arms, were found separately the bones of the said king, and those of Queen Guinevere, which were of marvelous beauty...on the following day...the lord king replaced the bones of the king and the queen those of the queen, each in their own casket, having wrapped them in costly silks. When they had been sealed they ordered the tomb to be placed forthwith in front of the high altar, after the removal of the skulls for the veneration of the people.


After King Henry VIII ordered the "dissolution" of the abbeys in 1536, the Glastonbury Abbey - with the graves - was destroyed in 1539 and the bones lost to history, though the leaden cross discovered with the bones survived. We know John Leland saw it about 1540 and William Camden seems to have used it for an illustration in a work printed in 1607. In the early 1700s, the cross was in the keeping of William Hughes of Wells Cathedral, though what happened to it afterward is uncertain.
Posted by Rev. Daren J. Zehnle, J.C.L., K.C.H.S. at 2:11 AM