An unexpected encounter in the cemetery

The timing of the Lord is often both particular and inscrutable, adding to its wonder, mystery, and beauty. I have spent a good part of yesterday working on plans for a commemoration of an important event in the life of the Servant of God Father Augustus Tolton in the near future. 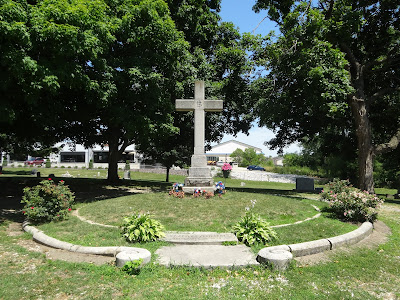 As part of these plans, I decided to make a visit to the grave of Father Tolton to help both focus and direct my thoughts. As it seemed to me a spontaneous visit, you can imagine my surprise, then, when a woman - who had been sitting in her car apparently finishing a conversation of her telephone - called out to me, "Are you visiting?" Aside from one of the workers at the cemetery, I do not recall anyone ever being at the cemetery whenever I have visited his grave. Not quite understanding what she meant, I asked, "What?" She clarified her question this time, saying, "Are you visiting Father Tolton?" An affirmative answer led into a conversation between the two of us. She visits the grave frequently and often finds visitors looking for Father Tolton's grave.

We quickly realized that the two of us had previously exchanged e-mails and had planned to meet during my brief stay in Quincy before my move to Springfield next week. She was Isabel Armengol, the painter of the excellent image of Father Tolton recently installed in the chapel of Quincy University, about him I told you a few weeks ago. After seeing photographs of the painting online and knowing I wanted a copy of it, I sent an e-mail to her asking if it were possible to obtain a print of the image. She said it was and was happy to give it to me when I was next in the Gem City.

We talked there in the cemetery for about thirty minutes about her devotion to Father Tolton and about the process of painting the four feet by six feet image on which she worked for a year. While it was a project of love, she is still hoping to raise $15,000 to compensate her time, efforts, and energy on such a worthy project. She, of course, is right to do so and the Code of Canon Law even states that "lay persons who permanently or temporarily devote themselves to special service of the Church ... have the right to decent remuneration appropriate to their condition so that they are able to provide decently for their own needs and those of their family" (c. 231 § 1, 2).

There was once a day when the Church sponsored artists and most of the great works of art - now sadly treasured in museums - were commissioned by bishops, cardinals, and others from noble and royal families to adorn the houses of God, to contribute to the majesty of his worship, and to aid the prayer of the faithful. I think Ms.Armengol's painting of Father Tolton during the celebration of his first Holy Mass is able to achieve each of these ends.

Regrettably, today the Church is no longer such a patron of the arts, in no small part because most parishes and dioceses simply lack the necessary funds to support the work and livelihood of artists because we do not have noble and royal families who continue to support these works of art. Without such sponsorship, it sometimes becomes necessary to appeal to the generosity of all of the faithful to give proper remuneration to artists for their works, a sort of ecclesial crowd-funding, if you will. Such is the case with the painting of Father Tolton. 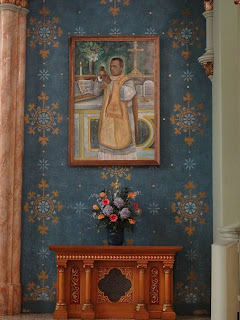 Until the funds are provided, the agreement between Ms. Armengol and Quincy University is that the painting will remain in the Q.U. chapel for three years, after which time the painting will return to the keeping of Ms. Armengol, who will seek the rest of the funding elsewhere. I hope it does not come to this. Though she did not have the chapel in mind when she began her work on the painting, it fits beautifully in the chapel and I think we should make a concerted effort to keep it there.

I have made a donation to this great project and I humbly ask you to consideration making a donation toward it, as well. If each of us contributes even a little something, we should be able to reach the goal without too much difficulty. I particularly appeal to my fellow Quincyans.

Just before Father Tolton left Quincy to take up his ministry in Chicago, he said, "Never will I forget the happy hours spent in the little St. Joseph church. I wish them ["the people of the Gem City"] all the blessings that can be bestowed upon them, for that charitable spirit that they have always shown toward me and the colored children." If Father Tolton promised not to forget us, let us not forget him.

For information about how or where to make a donation, please visit this page. Thank you!
Posted by Rev. Daren J. Zehnle, J.C.L., K.C.H.S. at 6:25 AM