The Holy Face of Jesus and the New Evangelization

Over at The Way of Beauty, David Clayton has written about the connection between the New Evangelization and the domestic Church. Within this post, he notes that

Iconographic images of the face of Christ are always painted with an expression of compassion tinged with a slight sternness. This enigmatic combination tells us that Christ is a judge (hence the sternness), but that he is a good and merciful judge.

As an example of this expression of stern compassion, Clayton provides a lovely image of the face of Christ he painted:

When I saw this icon, I said to myself, "I know that face!" Indeed, I visited it again this past Saturday with two other priests living at the Casa Santa Maria. 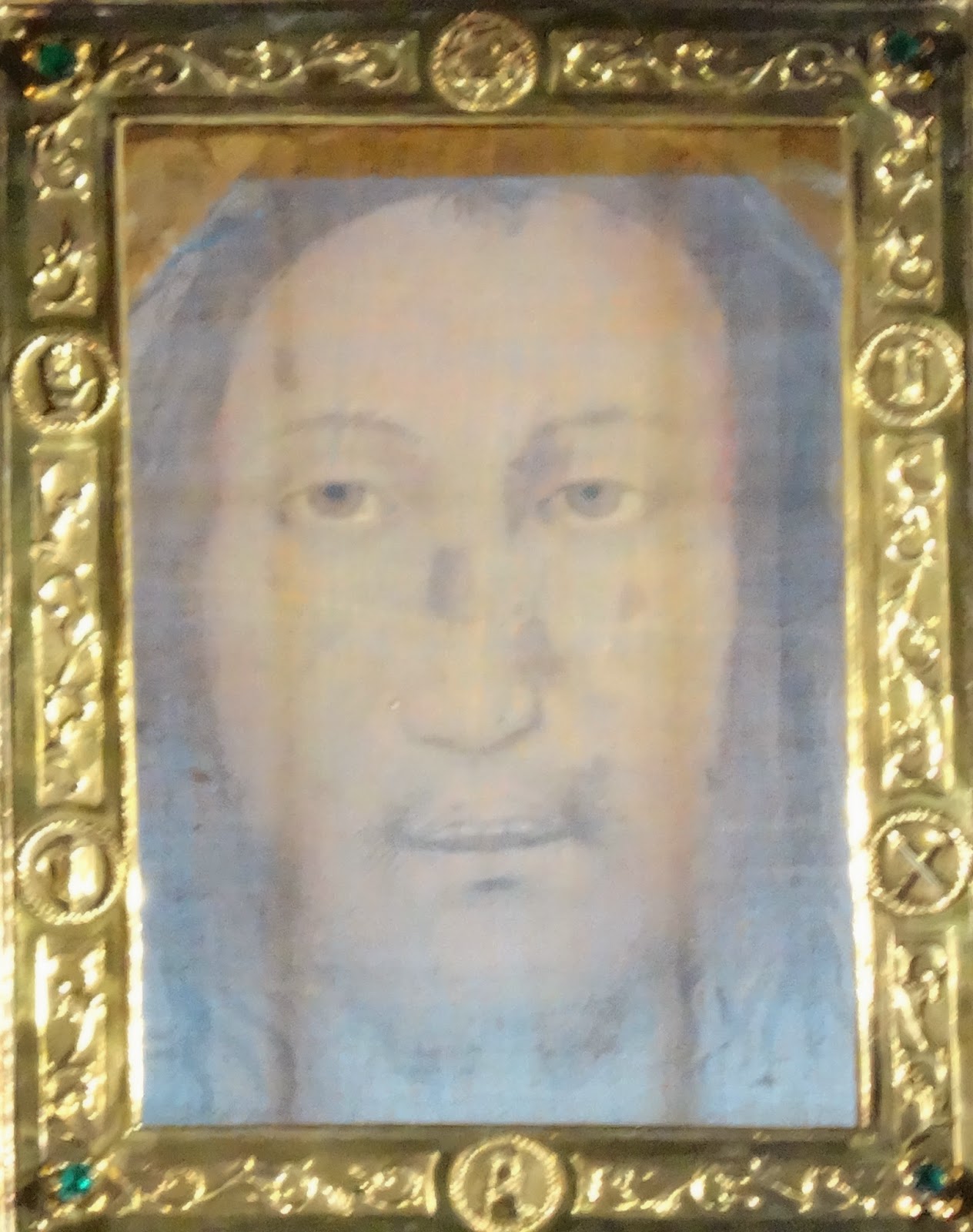 In fact, after my first visit to Il Volto Santo (The Holy Face), I described the inexplicable image on the veil of byssus in much the same way Clayton describes the face he painted:

In the image visible from the pews, the eyes and mouth of Jesus seem almost stern, as if to call to mind the words of the prophet, "But who will endure the day of his coming?  And who can stand when he appears" (Malachi 3:2)?

Yet in the image on the opposite side of the cloth, which is visible by climbing a set of stairs at the back of the sanctuary, the mouth seems to conceal a gentle smile and the eyes look with a calm serenity.

The sacred veil housed now at the Shrine of the Holy Manoppello is the very veil that covered the face of Jesus in the tomb:

Then Simon Peter came, following him [John], and went into the tomb; he saw the linen cloths lying, and the napkin, which had been on his head, not lying with the linen cloths but rolled up in a place by itself (John 20:6-7).

I've mentioned in the past that Father Eric Sternberg and I - among a few others, notable among whom is Paul Badde - consider the Veil of Manoppello and the icon of Our Lady known as The Advocate (which is housed in Rome) will both be at the heart of the New Evangelization. So it is that I am particularly intrigued - and pleased - by Clayton's association of the Holy Face of Jesus with the New Evangelization.

In an age when - as Benedict XVI never tired of warning us - too many people have forgotten about God, Jesus is slowing but surely placing his Face before us once again even as he did with Peter and John:

Then the other disciple [John], who reached the tomb first, also went in, and he saw and believed; for as yet they did not know the Scripture, that he must rise from the dead (John 20:8-9).

John saw the cloth that had covered the face of Jesus - the very cloth now housed at Manoppello - and believed in the Lord's Resurrection. By looking upon the Volto Santo, men and women of our own day will also come to believe in the Resurrection and to know Jesus to be the Lord.

If you have not yet read Paul Badde's two books tracing the history and importance of the Volto Santo, I wholeheartedly encourage you to do so. The titles are easy enough to remember:
Posted by Rev. Daren J. Zehnle, J.C.L., K.C.H.S. at 3:26 PM