Nicholas Frankovich has written an interesting (I think that's the best way to describe it) article at the National Review in which he asserts that "Pope Francis Enters His Third Year of Scolding Introverts."

Knowing me to be a self-professed introvert, a friend sent the article to me asking my thoughts about the author's claims. After my initial comments, I've had a bit more time to consider my thoughts and thought I might share them here.

Over the past several months, there has been a slowly growing campaign among introverts to try to get the extremely extroverted culture in which we live to understand us better so that things like this do not happen to us:

If you cannot appreciate or do not understand this graphic, suffice it to say that you are not an introvert.

I'm not quite sure when this movement first began - or how successful it has been - but it seems to have begun sometime around the publication of Susan Cain's excellent and insightful book, Quiet: The Power of Introverts in a World that Can't Stop Talking (if you haven't yet this book, you should, whether you are in introvert or an extrovert).

In this world that can't stop talking, I - and many of my fellow introverts - sometimes feel like this:

There are many times here at the Casa Santa Maria that the noise volume in the refectory - which was acoustically designed for the reading of texts during meals - becomes so loud that I cannot remain in the dining room without losing my sanity and developing a very large headache. The external stimuli become too much for my brain to take in and process and it begins to become overwhelming and draining. I've never liked loud environments or going out to eat with more than five other people (one, two, or three others is preferable) because it becomes too much and takes a long time to recover my energy.

Within this introvert movement, there seems to have developed two camps. The first seems to me to be reasonable and sane, seeking to let it be known that introversion is not the same thing as shyness and that not all introverts are anti-social recluses. I support this camp and identify it. They want people to know this:

But the other camp is not always so gentle and seems to look for what it perceives as attacks on introverts. Many in this camp strike me as actual anti-social recluses who want never want anything at all to do with extroverts. Such a position is both unreasonable and impossible. This camp supports such graphics as this:

Being of an introverted nature does not mean that you should not keep your word. It is into this second camp of introverts that I suspect Frankovich has fallen.

Frankovich begins his article with the assertion that as

Of these two claims, the first, I think, is more likely than the second.


At least in his interactions with the public, Pope Francis certainly comes across as a very extroverted personality, hugging and smiling at everyone in sight. The crowds have responded well to do this, but an extroverted world does not know what to do with a public introvert.

But we do not know what Pope Francis does after being with the crowds. Does he go back to the Apostolic Palace and immediately sit down for meetings with visiting dignitaries and attend to the usual work of the day? Does he take some time to himself to read or take a nap? The media has not yet asked these questions and Pope Francis has not yet said.

If photographic evidence portrays an accurate picture, something clearly happened to Jorge Cardinal Bergoglio with his election to the See of Peter. The man who formerly was very introverted - we saw something of it immediately after his election when he simply stood on the balcony and stared out across the people for several minutes. The more I think about this, the more it strikes me because even the very introverted Benedict XVI came onto the balcony waving and smiling at the crowds. Consider this:

And compare it to this:

Who, in these pictures taken just after their elections, looks more like an extrovert?

This is where I think Frankovich first goes wrong with his assessment of Pope Francis. He seems to be only aware of what the media passes on about him (and we know why that's a bad idea). All he sees of Pope Francis are pictures of him smiling broadly and embracing everyone within reach, but I wonder if he has ever looked at pictures of Pope Francis when he offers the Holy Mass? Within the Liturgy, Pope Francis looks anything but an extrovert: 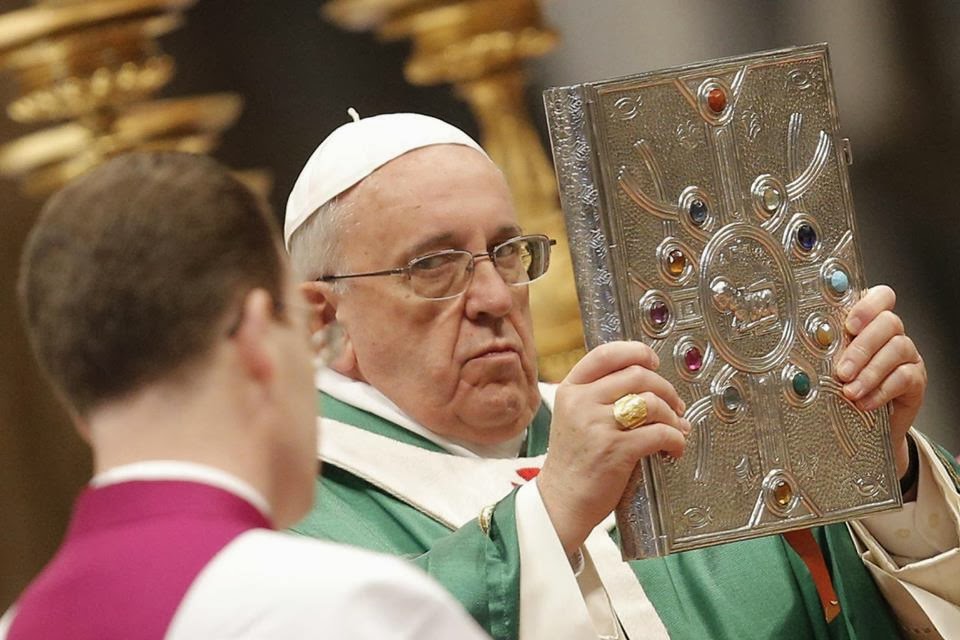 These are only three images, but others are very easily found; the media, however, chooses not to share them, just as they only rarely shared pictures of Benedict XVI smiling broadly.

In consider whether or not Pope Francis is an extrovert, we cannot forget that he spends, by his own admission, more than an hour in prayer each morning before Mass and another 30-60 minutes in prayer before dinner (I can't seem to track this source down; perhaps one of you can help?). This doesn't quite sound like the activity of an introvert.

I suspect that, at his core, Pope Francis remains an introvert, but that he has learned, most likely with the aid of the Holy Spirit, how to be an extrovert while with the people. The world being what it is today, this is probably a necessary skill.

Frankovich spends a good part of the rest of his article explaining what he means when he says that Pope Francis places "a negative moral value to extroversion’s complement, introversion," a claim I'm not so sure about, though it does have some merit.

His principle evidence seems to be this:

The primary reason that he disappoints many Catholics who delight in cultivating their interior life is not that he leans left in his politics and theology but that he’s shallow or at least presents himself as such. He has little apparent interest in the life of the mind. He lacks the patience to think slowly.

The first bit of evidence comes from Pope Francis' homily on 26 September 2013. This is problematic because we do not have the text of that homily, but only a rough outline with a few sparse quotes provided. The portion of the homily in question is summarized as follows:

I remember reading about this bit after he said and it frustrated many of us studying here in Rome. The Church tells us that we will find holiness by following the Church's wishes for us, which, for the time, is academic study, which is normally done in a library. But Pope Francis seemingly told us this wasn't true, despite such shining examples as Saint Thomas Aquinas.

What we didn't know then - and what Frankovich seems not to have known and what I only just know learned - was what Pope Francis then went on to say. The summary continues:

We can also come to know him in the Catechism, the Holy Father affirmed. “It is true! The Catechism”, he continued, “teaches us many things about Jesus, and we should study it, we should learn it”. However, the fact remains that knowing about Jesus through the Catechism “is not enough”: knowing him with the mind is a step in the right direction, but “in order to know Jesus, we need to enter into a dialogue with him. By talking with him, in prayer, on our knees. If you don't pray, if you don't talk to Jesus,” he said, “you don't know him”.

After saying we cannot know Jesus "in the calm" or "in the library," he tells us to study the Catechism - which would likely be done in a library - and to spend time in prayer - which is normally done in the calm. Both libraries and prayer are enjoyed more by introverts than extroverts, if the experience of my friends (among whom are both introverts and extroverts) is to be believed.

This brings us to Frankovich's second piece of evidence, that Pope Francis "lacks the patience to think slowly." Here I think Frankovich may be correct. Though a Jesuit, Pope Francis does not seem to have ever completed his doctoral work.

The difficulty with Pope Francis - if I may put it that way - is that he is not a precise thinker. We see this in the homily above and we have seen it time and again in his airplane interviews. This is not helped by the media who seems to all but revel in distorting what he says.

In what seems rather a leap, Frankovich goes on to associate extroversion with the New Evangelization:

The word “missionary,” of course, is now associated with colonialism and has fallen out of fashion. And “apostolic” sounds churchy and formal. In contemporary Catholicism, the new word for the Extrovert Ideal is “evangelical,” as in “the New Evangelization.” You know the drill: Leave the fortress and sally forth into town. Drop that sourpuss, Counter-Reformation stance contra mundum. Engage the world with a smile. Let’s dialogue.

To be fair, Pope Francis isn't the first one to tell us we should not look like sourpusses. Saint Francis of Assisi said, "It is not fitting, when one is in God's service, to have a gloomy face or a chilling look." Given that Jesus came "that your joy may be complete," I'm not sure how one could argue with this (John 15:11).

When he told us to "go, therefore, and make disciples of all nations," Jesus did not say this only applies to extroverts (Matthew 28:19); this commission belongs to every one of the baptized, whether extrovert or introvert.

Frankovich is right to note, though, that

All Christians are called to contribute to the Great Commission, but the nature of the contribution will vary from individual to individual, as the body of Christ has many members, each with a different function.

Until now, Pope Francis has frequently and repeatedly called the Church to "go out to the peripheries" and bring people to the Church to encounter Jesus Christ. Of course this must be done; it was Jesus established his Church in the first place!
But if each of us was constantly out, there would be no one to welcome those who came to the Church. This is, admittedly, not something Pope Francis has spoken much about publicly, but given his repeated exhortations to prayer, I don't think he would disagree with it. Remember that Pope Francis is not a precise talker and frequently emphasizes one side of the coin, if you will, at the expense of the other side. Is this sufficient reason to say that Pope Francis is always scolding introverts? I don't think so.
In his Apostolic Exhortation Evangelii Gaudium, Pope Francis insists that "if the whole Church takes up this missionary impulse, she has to go forth to everyone without exception" (48). Words of this sort seem to be at the heart of Frankovich's assertion, but we have to ask ourselves what Pope Francis means by this. Does he really mean that each member of the Church has the same role to play in the New Evangelization, in the act of going out?
Pope Francis explains what he means with the insight on a introvert:

Going out to others in order to reach the fringes of humanity does not mean rushing out aimlessly into the world. Often it is better simply to slow down, to put aside our eagerness in order to see and listen to others, to stop rushing from one thing to another and to remain with someone who has faltered along the way. At times we have to be like the father of the prodigal son, who always keeps his door open so that when the son returns, he can readily pass through it (46).