Homily - Tuesday of Holy Week - On you I depend from birth


This morning I had the honor of celebration the Station Mass in the church dedicated to Santa Prisca. The homily I preached follows: 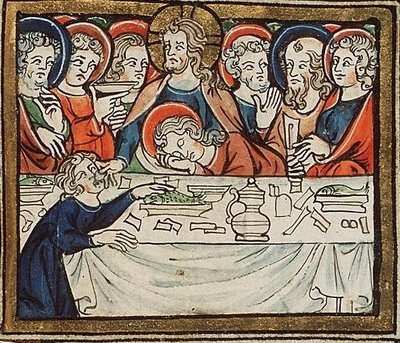 Each of these questions has but one answer, an answer concealed within the manner in which the Lord subtly revealed the person of his betrayer. When the Lord handed over the dipped morsel, Saint Bonaventure says that Jesus revealed “the astounding ingratitude of the betrayer, whom so great a humility, so great a love, and so great a level of intimacy do not prevent from betrayal.”[1] Having witnessed so often the humility, the love, and the intimacy of Jesus, Judas was not prevented from betrayal because, though “having been spurred to repent in so many ways, he did not repent.”[2] Remaining ungrateful despite the intimate and humble love of the one he would betray with the false kiss of friendship, Judas did not yield to the merciful love of the Savior and so betrayed him to death; he did not say to him, “On you I depend from birth” (cf. Psalm 71:6).

“One of you will betray me.” Although we know in hindsight the identity of the betrayer, still Jesus’ words sting and hit with the force of a blunt and unexpected honesty. Why? Because the Master and Teacher might well also address these very words to each of us: You will betray me. Can we argue with or deny such a statement? Even Saint Peter, who loved the Lord with a greater intensity than the rest, who denied knowing Jesus in his greatest need, declared, “I do not know the man” – even he betrayed the Lord (Matthew 26:74).

Too often do we forget that when Peter rashly exclaimed, “Even if I must die with you, I will not deny you,” the others said the same, yet Peter denied knowing Jesus and none of the others died with him the next day (Matthew 26:35). Peter’s denial of Jesus is truly a betrayal and – at least subjectively – is worse than that of Judas because of Peter’s greater love and intimacy. “Do you love me more than these?” Jesus would later ask him, and he would answer – in a few more words and with deep humility – “Yes” (cf. John 21:17).

Like Judas, Peter had been spurred to repent in so many ways, and through his humility – which so often butted against his pride – he was able to do what Judas did not: Peter repented of his betrayal of Jesus, he repented because of his gratitude and said in his heart, “On you I depend from birth.” Like Peter, you and I, dear brothers and sisters, are spurred in so many ways to repentance by the workings of the Lord’s grace. If we let him, he will teach us also to say, “On you I depend from birth”.

We may betray the Lord Jesus, you and I. Indeed, I daresay we will betray him, in one way or another. How many ways will the Master and Teacher spur us to repentance in this Holy Week? When he does, we need only follow the admonition of Saint Bonaventure:

Turn, O soul, to Christ on the cross [who] with head bowed waits to kiss you, his arms are extended to embrace you, his hands open with gifts for you, his body extended to cover you, his feet affixed to stay with you, his side open to let you enter.[3]